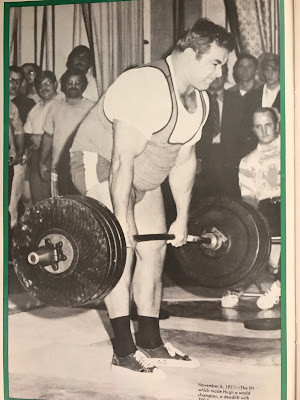 Once more, Thanks to Liam Tweed for the article!

I was always interested in strength as a kid, mostly the pushup and chin-up variety as I didn't even see a barbell until I was twenty. In high school I used to do 50 pushups every evening before bedtime. I played soccer in high school as our school was too small for football.

I went out for football in college in my junior year weighing 155 pounds. After three practices I discovered that being jumped upon wasn't the type of exercise I wanted. A few days later I went downtown to buy my first set of weights, a 110 pound set. I remember having trouble taking it home on the streetcar as the box weighed 85 pounds and the bar another 25. It took two trips (to my embarrassment) to get on the car as it was impossible for me to hold the box in one arm and the bar in the other for but a few feet at a time.

Like an idiot, I did all of the exercises pictured in the instructions for the first few workouts. Needless to say, this proved rather exhausting and really nixed the idea of lifting on a regular basis. With hit-or-miss workouts, I ended up one year later with the net gain of one pound, to a bodyweight of 156.

I decided then to investigate the local YMCA as I heard they had weights there. From out of the swinging door marked "Weight Room" lumbered the most muscular guy I'd ever seen. After a few sips of water from the fountain, he returned to the "Weight Room" and I followed him to the door. I must confess I was a little reluctant to enter with beasts of the size I had just seen possibly lurking on the other side. I made myself go in, and found myself in the midst of a well-equipped gym. I joined immediately and asked numerous questions and made enough of a pest of myself to finally get a gaining routine together. In the following six months I gained to 185 pounds. I entered my first bodybuilding contest and luckily placed third in the Mr. YMCA. The following year I repeated and took again. A lot of things were holding me back, mainly my body! I must be one of the top contenders for the world's smallest calves. I was and am still occasionally known as Birdlegs or The Great Blue Heron.

Another year or two and my bodyweight reached 205 and I joined the Army and went to Germany. While there I discovered a wonderful machine. It was a giant stainless steel box with rubber tubes hanging out. One simply has to lift a weighted handle and milk comes out! I put on 46 pounds in six weeks with that box, going from 196 to 242. I averaged seven quarts a day and often drank eight. Needless to say, I burst out of my army greens and which luckily we were only required to wear once a week at a flag lowering. As the pants no longer zipped, I held everything together with a broad belt which was fortunately covered by the long army blouse. I had meanwhile joined a nearby German weightlifting club representing Bingen, and was training hard. I never did get the timing and footwork necessary for Olympic lifting so my training partner Bill Sibole and I powered everything up. A total of 735 was my best via 260-200-275 in 1961.

After service I continued training, putting much emphasis on the bench press which was fast becoming my favorite lift. I was searching for some way to compete in this lift when I heard about powerlifting. In 1965 I attended the York Powerlifting Championships and saw the exciting battle between Roberson and Todd in the heavyweight class.

I met big Bob Weaver and saw several of the other "animals" backstage and was greatly impressed with the size and power of these men. It was a memorable evening also because I got two flat tires in the space of four miles and had to spend the night on the side of the road outside York.

Robert 'Big Bob' Weaver
"He ground it out until he was the best."

The lifting bug really bit hard and I began to train seriously on all three powerlifts. I entered my first meet in April of the following year in Phoenixville, Pennsylvania, weighing 245. I totaled 1410 via 415-475-520 and won first place. As I began to progress I kept training records and meet results so as to plan my training better and to discover which routines seemed to work best. Much incentive has been given by lifting friends and acquaintances such as Doug Ramsay and Gene Roberson who are two of the biggest, strongest, and yet most muscular guys I ever saw. My training partner Bill Trueax has been a big help also. The friends I've found in lifting generally all seem to encourage one another and exchange promising routines and information. That's a big part of lifting to me. 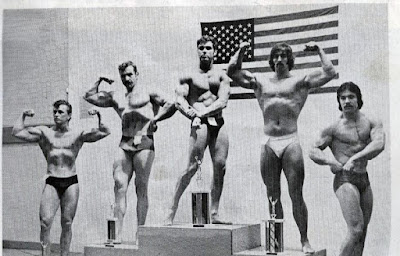 This year I finally got a big one with a win at the Seniors in Dallas. "The total was 2060 via 560-745-755 at 291 bodyweight. The World Power Meet is now over and I'm still floating around somewhere up there with the pollution on cloud nine. I barely edged Jim Williams as we tied on totals of 2160. I was the lighter man at 296 vs. 341 and got lifts of 570-800-790. It could have gone either way as there are so many variables in a contest. Jimmy upped his World record bench to 660 and that ought to stand for a long time.

I still plan to continue training although I'll be very happy to shed some of this excess poundage. Although I'm impressed with the "big guys" I find it isn't easy to be one of them without a lot of sacrifice. There is the constant sweating and the rashes that last until cooler winter weather. There is frequent acid indigestion and ever-present diarrhea from all the milk and eggs and protein powder. You have to walk like a duck or your thighs grind into hamburger. There are the spinal erectors that go into spasm whenever you walk up a grade and of course the food bill and the clothes that no longer fit. Big men's sizes are about as tasteful as some guy wrapped up in an awning. Most of my shirts look like I'm still in pajamas. What with the extra naps and the shortness of breath I've decided to reduce to the 242's again. I've been miserable these last two years but also very pleased with the gains in power.


My training prior to the World Meet is as follows:

I've got the neck up to 20-3/4 inches. You know it's big when you start sweating behind the ears.

Note: There'll be an article by Mr. Cassidy on neck training a little later.

I don't believe assistance exercises have that much value for me, therefore I use none. The rows and the neck work are simply throwbacks to a primeval bodybuilding past.

Diet consists of extra cartons (one pint) of milk between breakfast and lunch and supper. After the supper the wife mixed up two eggs, one instant breakfast, and two cups of powdered milk with a half gallon of skim milk in a large container and I sip that while I read or watch the tube. It's very hard for me to gain, but after I got my tonsils out this last summer and began with this concoction, the weight began to move.

The nickname has changed from "Birdlegs" to "Hogbody" now, what with a 49-plus waist and 295 bodyweight. So I plan to go back down and if I'm lucky I'll see my belt buckle once again.