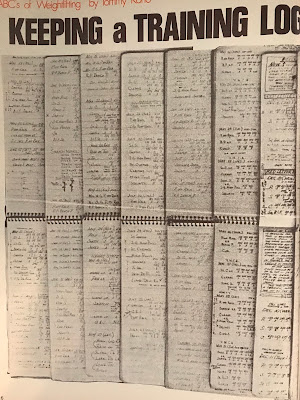 and so on went the list I had written down in my notebook for March 27, 1942 when I was 11 years old. I had sent a postcard to one of the popular "train by mail" schools for more information about their bodybuilding course and I was sent a measurement form. I had my older brother carefully measure me and although I filled out the form I never mailed it nor the $36.00 that was necessary to enroll in the course. I was intensely interested in developing my skinny body, however, so I made copies of this form and measured myself quite regularly even though I had not taken up any form of systematic training.

Years later I had learned about weight training and entered by first weightlifting competition in early 1948. Then I started to keep some notes on my weight training in addition to the body measurements. At first I used to write only the new training records I would make.

In reviewing my training program I found that the notes I kept were too incomplete so I started to write down every repetition and the number of sets and weights I would handle. The loose leaf notebook I had been using wasn't satisfactory so I switched to the spinal ring type notebook used by stenographers. During my second year of competitive lifting I started to keep notes not only of my training but also any new ideas I would have in regards to technique, training methods, goals and training plans.

In essence my training log book became a diary of everything concerned with weightlifting. I referred to it often in checking the progress I was making and to correct any weak points of my lifts by reviewing the technical notes.

The more I became involved in weightlifting the more training notes I started keeping. It was at this point that I noticed that the amount of improvement made in my lifts was in direct proportion to the amount of notes I kept.

The photo above shows nine of my 10 training log books which cover every training session over a period of 15 years - from January, 1949 until September, 1963. The books list every set, rep, and weight lifted in training and in competition during that time and many of the ideas have appeared in my ABC articles.

During the last few decades the Russians, Poles, Bulgarians, East Germans, and Hungarians have all come out with their own training log books. It is no small wonder that these Eastern European nations have bettered their performances. The coaches and lifters make good use of the information within the log books.

At the 1958 Olympics the defending super-heavyweight Olympic champion Zhabotinsky proudly informed me that he had filled six log books with his training data. Many times world champion, Victor Kurentsov, is always seen at the training hall with his log book. Batishev, the second best superheavy of Russia, has his book in his training bag all the time and constantly refers to it during his actual training and writes in his lifts. The outstanding Polish lifter, Baszanowski, keeps a very detailed account of his training. If men of this caliber keep a written record of their training, why not the less talented lifters?

When I started my work in Mexico in 1966 as their national coach I required every lifter who trained under me to keep a well written record of what he did during each training period. When I moved to Germany to coach I asked that a weightlifting log book be made available to the better lifters. In early 1970, Dave Webster the Scottish national coach and I collaborated and produced what I believe to be the first English language edition of a training log book. More recently Wes Woo of Vancouver, B.C. came out with the loose leaf type.

Writing your training on a scrap of paper as I have seen some do is not a good method, for many times the paper becomes lost or the lifter either forgets or becomes too lazy and doesn't transfer this note into a permanent book. The book you use doesn't have to be an expensive nor an elaborate one, but rather a sturdy one that can withstand heavy usage.

To save yourself lots of writing you could use abbreviations and code numbers or letters or use a certain corner only to keep certain notes. The important information that you should include would be the following: day, date, time - beginning and ending of the workout - and if you train at various places write he name of the place, and naturally the exercises - sets, reps, weights used, bodyweight before or after the workout or both. Also include a little remark about the workout or of a special exercise.

You can become more detailed in your note taking by including other factors such as the amount of sleep you had the previous night and any rest period you may have taken during the day prior to your workout, your general feeling - which is subjective but may help you evaluate your training later on - before your training session.

A long time ago I read that one of the most interesting books for any person to read is his own savings account book. You can usually tell when you received a raise or purchased a new car or got a bonus, etc. It shows a systematic saving or undisciplined approach to saving. For a weightlifter the most interesting book to read would be his own training log book. It would show his progress or his lack of progress. You can use the information to analyze your past lifting and from this develop a better future plan.

It is very rare in the U.S. to come across a lifter with any sort of a coach helping him plan his training routine and correcting his faults in lifting technique. Nearly all the past and present crop of good lifters are self-trained, getting ideas from lifting journals and speaking with other lifters and getting some helpful hints from former lifters. Those who show continued progress are the lifters who are constantly seeking information, reflecting back to their training program and trying to improve on their training plan by analyzing their past training.

I have often borrowed and used the expression, "The palest of ink is better than the best of memory," and it holds true more in weightlifting than in any other sport. In our sport a person can deal so closely with statistics and data. The Russians have come out with such terms as tonnage, intensity, and monthly volume load, which came about only from research and analysis of the written training logs of hundreds of their top lifters and thousands of their lesser known lifters.

Written records have great influence in the development of mankind. Statistics help us evaluate the past and present and predict the future more accurately. Writing things down also helps us think more clearly and precisely.

One of the greatest advantages in keeping a training log book is the fact that it helps you organize your training, exercises, and sequence of exercises. It also helps you concentrate on what you are trying to accomplish with your training. Another worthy point is that it helps you form a better plan for the future by being able to evaluate your previous plan.

It is neither too late nor too early to start keeping a training log book. The champions do, so why not you?