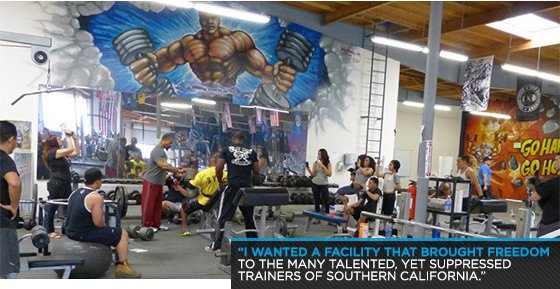 What attracts me to the 5x5 (not the cheeseburger, but the 5 sets x 5 reps training scheme) is that it's the perfect balance of power and strength. Power refers to the speed of the lift: Force times distance, divided over time. Strength refers to the total amount of weight one can lift. In this 5x5 scheme, both attributes are products of the volume: 25 total reps, all near maximal effort, build strength. And, playing with such a low rep count during each set helps develop power.

I know, to some, 5 reps is cardio, but in the grand scheme of things that's a pretty low rep count. I feel this blend of strength and power training best serves performance athletes, as many sports (football, MMA, hockey, basketball, baseball) don't just require sheer strength, but all the ability to produce speed (power) at the drop of a hat. Note: the 5x5 applies to all primary foundational lifts (squat, bench, deadlift, and overhead press).

There are many ways to approach a 5x5. For instance, each primary movement can be assigned a specific day: Monday Squat, Tuesday Overhead Press, Thursday Deadlift, etc. Not a bad approach, but unless I'm pursuing a strength goal (i.e. a powerlifting meet or strongman competition), I tend to avoid (body part/movement pattern) isolation and like to stick to whole body training from session to session. Therefore, each day (e.g. Monday, Wednesday, Friday) I'll perform squat, press, (bench or overhead) and deadlift, 5x5 on each. That's legs, push, and pull.

But, there's more to this program than just 5x5 squat, 5x5 press, and 5x5 deadlift. After each movement is completed, a secondary accessory exercise is performed for 3 sets of 20 reps. For example, after doing 5x5 squat, one would complete 3x20 leg press. After doing 5x5 bench press, try 3x20 on dips. And after 5x5 deadlift, you could do 3x20 on cable rows. So in its entirety, one would have done six movements in a training day: Three foundational lifts (5x5) and three accessory lifts (3x20).

I like this program because each lifting session is full body (and certainly no neglect to leg training, which is generally most important for athletes). This program is also very simple to follow, something one can easily complete in any gym - barbell movements are as basic (and effective) as it can get. It's a great strength program for two or three days a week in the gym.

Incorporating It Into Your Training

Maybe you can't get to the gym every day, or perhaps you're juggling weight training with another sport (which is why I say it's great for performance athletes). I use this strength program in conjunction with mixed martial arts and it serves as a great asset to my power and muscular endurance while in the ring.

Here's an example of a typical training week using this program:

Honestly, even if you couldn't get to the accessory movement (let's pretend you just don't have time one day), just the 5x5 on squat, bench, and dead is plenty of weight training for the day. Having just become a new dad, I often find myself short on time and the simple 5x5 S-B-D is perfect for 60 minutes in the weight room.

However, when I have the time and, more importantly, the energy (as I write this on three hours of sleep with the little one right beside me), the full 5x5 plus accessories is a butt-kicking program that bridges strength and power. It has served my strength throughout my MMA training, and is also my go-to program for periods of my life when I'm busy (also known as life happens).

I'd like to add one final piece to the puzzle: A long term plan. Typically, I try to abide by this 5x5 protocol for a good 10 to 12 weeks, slowly but surely increasing the weight week by week. Then, after about three months, I'll drop the weight slightly (usually to about the same weight that I started week one or two's 5x5 with), and complete that given weight for 3x10. This not only serves as a much needed deload, but also reassures the significant strength gains received from the 5RM has now become the 10. I find it best to spend a solid two to three weeks playing with this deload.

Here's an example of a week-by-week progression:

You can either spend another week sticking to the deload, or jump  onto the 5x5 protocol, starting at, or around, the weight you left off at. I'd start at around 260 or 265 lbs.