Originally Published in This Issue 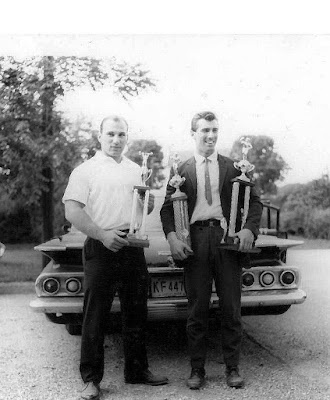 ARTICLE AND PHOTO COURTESY OF TERRY STRAND.
Thanks Terry!


In our last issue, we discussed everything about Bob Gajda, except his training. This time, we'll take a look at the routines he used in preparation for the Jr. Mr. America and the Sr. Mr. America this year.

As most of you know, Gajda has been following the Sequence System for more than two years. He feels he gets his best progress from this type of routine. The basic idea is that the muscles will grow due to the amount of work performed, not because of the large amount of blood pumped to the area. In addition, because you rest less, far more work can be performed in the same period of time that might be used in the regular multiple set systems.

When used by Gajda, five exercises are selected as a group. Each exercise is performed one set each, in rapid succession. Completing all of them once is considered a full group set. Then, this one group set is repeated in the same way, as many times as desired.

This is definitely not a routine for a beginner and even for the advanced man it should be approached carefully. This DOES work for Bob Gajda and gave him one of the finest physiques in America. You'll notice his development is not of the puffy, over-inflated type - he possesses size, shape, definition and separation (a rarity) too.

Following are Gajda's advanced routines. I doubt that you'll be able to follow them in full at the beginning, but modify them for your own use. Sequence training as popularized by our Mr. America definitely has much to offer every bodybuilder.

Plus one-half hour of specialization on any particular bodypart that is lagging behind.

He then runs for one-half mile and does some additional work on the abs.

On each of his training days Gajda does some morning neck and calf work - usually five sets of 20 reps for each part.