Often I am amazed by the number of otherwise intelligent bodybuilders who fail to realize that acquiring biceps bulk alone is not the be-all/end-all of arm development. I personally learned early in my bodybuilding career that triceps size constitutes two-thirds of the upper arm's bulk and that without a complete triceps development even the largest biceps looks awkward and asymmetrical.


The three-headed triceps is a beautiful muscle to behold and it is one of the very few which appears impressive in a relaxed state, although this only happens when the muscle is fully developed with nary a weak spot. It is an easy matter to build bulk into the triceps but extremely difficult to fill out those hard to get at spots, particularly just above the elbow. Even the most impressively constructed arm suffers if every square inch isn't fairly bursting with muscle.

For a long while I was dissatisfied with my triceps development. True, they were large and defined, but their shape was not all I had hoped for and there were those gaps wanting for which simply wasn't there.

Tri-Sets are one of the most effective training methods available to the advanced bodybuilder. I decided to use a tri-set in which one exercise of the trio would work one head of the muscle, in which each movement would directly activate the muscle's weak points, and in which all movements would effect a total harmonious development between all three heads.

I chose a routine that emphasized pulley work, for strict barbell exercises had proven to be of minimal value in my particular case. Barbells just didn't seem to give me the feel I needed in my triceps.

The first exercise of the tri-set is for the long head of the triceps. This head forms the bulk of the under-portion of the arm. When your arms are outstretched, and in the crucifix pose, this head gives that pleasing sweep from the elbow to the deltoid. Under-development here detracts greatly from the entire arm appearance. For this head I chose to use the Long Pulley Triceps Extension . . . 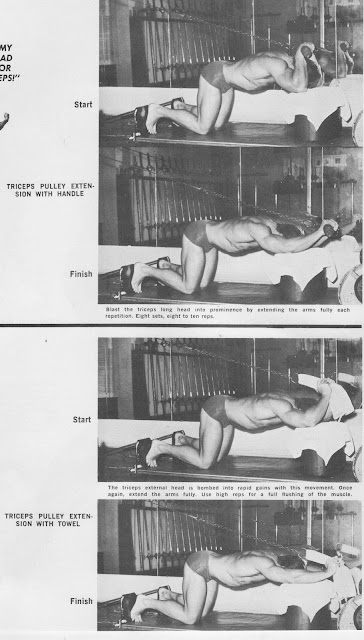 1) Assume the position shown in the photo, kneeling, upper body parallel to the ground and its balance maintained by the tension of the pulley's weight against the arms.

2) Extend the arms fully, making certain to press out the pulley as far as possible.

3) Resist the pulley's backward journey prior to the next rep. The tension caused by the returning motion of the pulley must flex the arms maximally for best results.

4) I like to do 8 sets of 8-10 reps with 4 or 5 "burns" completing each set (burns are short, quarter movements either at the top or at the bottom of the exercise). A similar arrangement of sets and reps will probably be suitable for you.

The next exercise - Long Pulley Triceps Extension with Towel - is performed in a manner identical to the first movement, except (as illustrated and denoted) a towel is used in conjunction with the pulley rather than the conventional handle. Using a towel requires a different hand grip than the handle and so a different stress is thrown onto the triceps - a stress which effectively works the external head. Perform this exercise exactly as the one before; you will have to use about 10% less weight however. 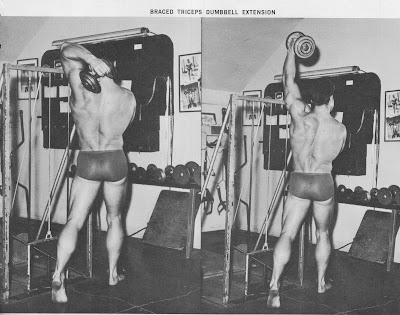 The last movement of this tri-set is an old standby brought up to date - the Braced Triceps Dumbbell Extension. The usual extension done with the elbow free to move takes much of the concentrated stress away from those triceps areas which need it most. However, when the arm is braced against a stable object it becomes locked in a fixed position and the action of the exercise can be thrown into virtually any section of the muscle the trainee wishes to work. Further, specialization can be obtained by gripping the dumbbell with the palm facing up as well as down.