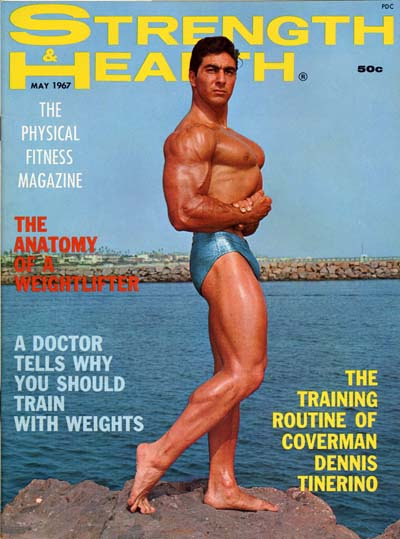 Originally Published in This Issue (May 1967)

When Alfy Darrow was four his parents took him to be inoculated. The sterile building frightened Alfy, the nurse frightened him even more, and when he saw the needle he cried and ran out on the street. His parents caught him and brought him screaming back, and to quiet him down they promised him the needle wouldn't hurt.

The nurse who dealt with fifty frightened children a day and told them all the same lie, agreed. "In fact," she laughed, "it even tickles a teensy little bit."

Placated by all this adult reassurance, Alfy offered his arm. The nurse jabbed in the needle and the point broke off and it took a doctor twenty shrieking minutes to dig it out.

Alfy didn't get smallpox, but he became very skeptical towards the promises of other people.

When Alfy left school he went into commercial art. By the time he was twenty he was good at it and ready for promotion.

His girlfriend rode a motorcycle. She urged Alfy to try. "It's easy," she said. "Like falling off a log."

Alfy fell off the cycle and broke his right arm in two places. He couldn't work for three months and the promotion went to another man who didn't ride motorcycles and never trusted anyone.

Alfy started weight training when he was twenty-three. And because he was very skeptical and evaluated everything carefully, and because he was violently opposed to wasting time and applied himself conscientiously, he made progress. He was small boned and finely muscles and because of this he put on weight slowly. At the end of a year and a half he had a nice physique. Still slim, but defined and symmetrical.

He needed more bulk, I told him about the High Protein-High Set program. He was skeptical.

"Alfy," I said. "You work this system properly and your measurements will change faster than a coal miner's pants."

He was still skeptical. We started at the beginning and went over the theory of muscle building from A to Xmas. We ended up with high sets and high protein. "Give it a try," I said. "You'll add some bulk."

"You need more bulk, you know. You're still kinda skinny."

"No," I said. "Skinny. Anybody that ain't big and bulky these days is skinny. You need more bulk."

"Maybe" he said. "But I wanta put it on slow and careful."

"I'm gonna enter contests some day. I don't wanta do anything to ruin my chances."

"This won't ruin your chances," I said. "It'll improve them." I sat up straight. "Good grief, you couldn't win fifth place in a flower show at the moment, and the way you're going you'll be a hundred and nine years old before you're ready for anything else."

Alfy looked hurt so I mellowed my voice. "It'll do you nothing but good."

"Alfy," I said. "You'll gain weight and look better. I guarantee it."

He pursed his lips but didn't speak.

I gave him my friendliest smile. "Alfy?" I said. "If you aren't satisfied with the results, you can train here free forever."

"Will you put it in writing?"

"Writing?" I screamed. "What kind of money grabbing crumb are you?"

"Right." I figured heaven would forgive me. "I guarantee it."

I had Alfy's program ready when he came in for his next workout. "Press behind neck," I said. "Then bench press, curl, and French press. Fifteen sets each."

He gave me a cold look.

"That's for Monday, Wednesday and Friday," I said. "You do squats, pullovers, calf raises, neck work, and rowing on Tuesday, Thursday, Saturday."

"What about Sunday?" he said. "Maybe I could come in and clean the furnace or something."

He started on the presses behind neck. He got through the heavy sets fine but tired on the fast light sets. "I gotta have more rest between sets," he said.

"Not a chance. That's part of the program."

He finished the fifteenth set and dropped on a bench. His deltoids and triceps were red and pumped.

He took five minutes rest and did the bench presses. His pecs blew up like balloons. He got up and wiped sweat out of his eyes and asked me if he looked like Grimek yet.

"To tell you the truth, Alfy," I said. "You look more like Jayne Mansfield at the moment."

He struggled through the last two exercises. He complained of nausea during the French presses. I told him he wasn't used to working so hard.

"Do you have to work this hard?"

"If you wanta succeed."

"Alfy," I said. "It's one of the few things I am sure of. Believe me, there's only one way to a herculean physique, and that's hard, hard work."

"And a heck of a lot harder. Anybody tells you different is just after your money."

Alfy came in the next night and puffed through the leg and back work. He complained of nausea again but I bullied him into keeping up the pace. By the end of the first week he'd gotten over the nausea, and at the end of the second week I weighed him.

"One ninety-four," I said. "That's eleven pounds you gained."

He worked harder and faster the next two weeks. His energy reserves picked up and he boiled through the workout at a good clip. At the end of the fourth week he weighed 202.

He was all smiles now. His poundage on the heavy sets started to climb the fifth week. He was pushing smooth and strong and showing his new power. "This is good," he said. "I feel different."

I kept after him about his diet. He was knocking off supplements, three big meals, three snacks, and two or three quarts of the 'Get Big Drink' every day.

"Keep it up. There's no use doing all this pumping unless your system's loaded with protein."

He worried about his waistline. I told him it might go up a little but but he could work it off after.

At the end of the sixth week he weighed 214.

We decided to go for two more weeks of all out effort.

He started taking a half-hour nap after supper and stepped up the effort on the heavy sets. He added weight every workout. He kept the light sets going at a fast boil and was finishing now so pumped he looked distorted.

He finished the eighth week going full blast and we called it quits. He wanted to continue but I told him that was enough for now. "You can try it again when you're ready for more bulk," I said.

He went back to his normal training and a week later I asked him if his new bulk was staying all right.

"You know," he said. "I should have let you talk me into this sooner."

"Sure," I said. "Bring me all your training problems."

"There's one thing." He stretched and flexed an arm. "None of my clothes fit anymore. I need a whole new wardrobe."