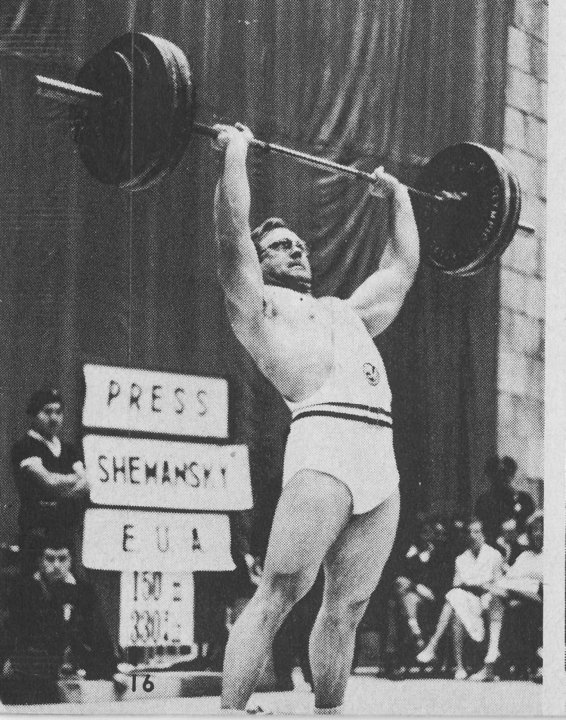 There is no doubt for several years British lifters were pressing in the most correct style in the world, and by "correct" we mean in strict conformity with the rules as interpreted in Britain. In other countries, however, the interpretations were much looser, and now, whatever our ethical objections, it is evident that a looser interpretation has become universal. Very wisely deciding to give British lifters some of the benefits to be derived from the looser definition of the Press, as laid down in the international rules, the BAWLA Central Council recently adopted the international definition in place of the original British definition.

Unfortunately, there still lingers in Britain the influence of the old definition with its insistence on a Clean directly into the sternum. As a result, there are still many lifters who pull the bar right into their sternum with consequent raising of the elbows and then prepare to Press with the bar tucked away under the chin. From such a position, the bar has to be pushed forward at the start of the Press in order to clear the chin, then it has to change direction in order to be driven upwards. Then comes another change of direction in order to being the bar back over the head and the final change of direction to send the bar upwards again (See Figure 2). 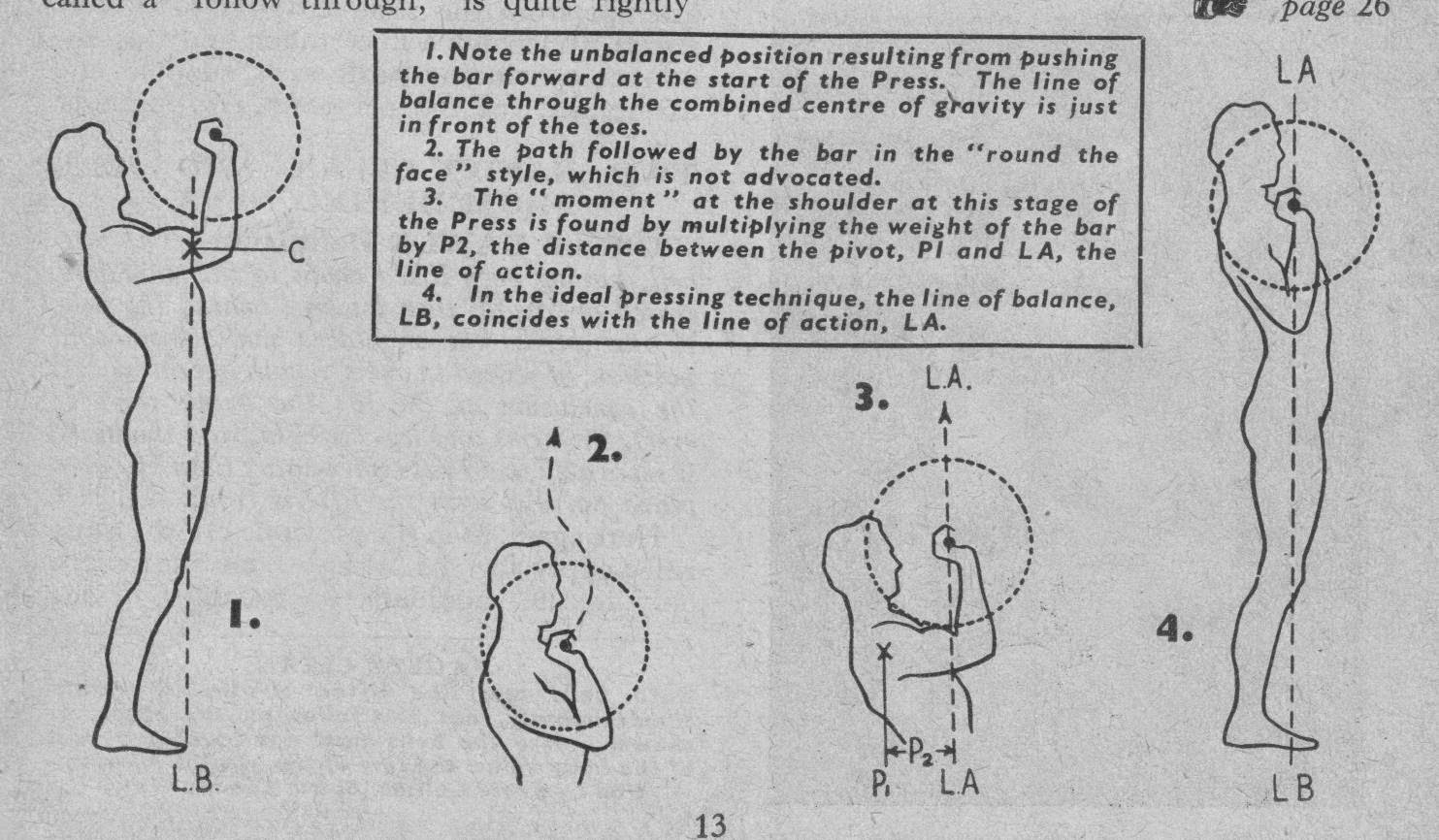 
Already it has been mentioned that considerably more power is required to change direction than is needed to keep the bar moving along the original line of action. Thus a greater amount of energy is wasted in the "around the face" style.

In addition, this style tends towards "lay-backs." The first movement forward throws the combined center of gravity vertically above the toes (See Figure 1). The lifter is at once in an unbalanced position and one of two things can happen. Either the bar comes down or the lifter leans back in an instinctive effort to re-distribute his whole mass more evenly over his base. Not only is this contrary to the rules but it also makes matters worse as far as the Press itself is concerned, because the mechanical factor known as a "moment" must now be considered.

During this part of the Press, the shoulder is the main pivot and it is at this pivot that the "moment" takes place. This "moment" may be calculated very accurately. It is equal to the weight of the bar multiplied by the perpendicular distance between the pivot (i.e., the shoulder joint) and the line of action of the bar (See Figure 3). Therefore, the father forward the bar is sent with the compensating lean-back to make matters worse, then the greater the "moment" at the shoulders. This "moment" acts in a downward direction and is overcome by a force giving an equal "moment" in the opposite direction. This force is applied by the pressing muscles at the shoulder, principally the anterior deltoids, the anterior fibers of the upper trapezius and the clavicular fibers of the sterno-cleido-mastoid muscles. The success of this type of Press depends on the ability of these muscles to overcome the original "moment" at the shoulders and usually they cannot cope with it when a top poundage is pushed way out in front of the shoulders.

The third objection to this style is related to the change of direction over the head. The effort of changing from backwards to upwards when handling a top weight required an intricate merging of muscle action that is difficult to perform smoothly.  The bar will "stick" momentarily and cause the Press to be ruled out for stopping. Not only that, but usually there will be another automatic compensatory action, just as there was when the bar was originally directed forward. With the bar moving backwards there invariably causes an equal and opposite reaction from the upper body. The tendency is to sway forward under the bar and to poke the head forward. This movement, usually called a "follow through," is quite rightly frowned upon be referees as being a deviation from the constant vertical position required by the rules.

There is only one direction in which to press effectively and that is vertically upwards. They you are never bothered with conflicting forces during a change of direction, and also the adverse "moment" at the shoulders is greatly lessened. With the bar traveling along a fixed vertical line, it is easier to adjust your own center of gravity so that the line of balance coincides with the line of the Press, or line of action (See Figure 4). Note that the bar is set forward on the chest. George Espeut was the first British lifter to use this position to advantage and as a result set up many improved Press records.

John Davis and a number of Continental lifters obtain a similar effect by pulling the chin well back.

Then we encountered the Russians in the world's championships in Paris in 1946, and practically every one of them started with the bar forward from the sternum in order to get this vertical drive. In addition they swelled the chest forward. When British officials first saw this technique, the declared that this was achieved by a lay-back of the shoulders. Since then, however, a careful study of action photographs, films, and the diagrams in the Russian textbooks has convinced us that this is not so. Instead they use the technique which the Americans are beginning to use in increasing numbers and which observation has proved is now being used by a large number of Continental champions.

The whole body is set in a gentle curve forwards from the ankles to the shoulders, with the hips at the apex of the curve. From the mechanical point of view this brings the center of gravity of the lifter into the vertical line passing through the instep and along which the bar will be directed (See Figure 4).

"But," the purists will say in horror, "that is contrary to the rules which say that the body must be vertical." Here we side with the Continental interpretation, which maintains that with the shoulders set vertically above the feet the requirements are being met, since the letter of the law is thereby being literally interpreted. For proof, study carefully the many action photographs which have appeared in this magazine ("The British Amateur Weight-Lifter and Body-Builder) showing top-ranking top-ranking lifters in action during the Press, and you will observe how many there are who have this curve between shoulders and ankles, yet their lifts are passed without hesitation by international referees.

Once the bar has started moving, in fact, we advise the lifter to make a conscious effort to keep his hips forward under the line of the Press, or as Bob Hoffman said to Pete George who had just learned this new style, "Just stand up there and keep pressing!" Thus the three centers of gravity mentioned in the previous article

From the referee's point of view it is an excellent style because it obviates the tendency to lean back. While the lifter constantly strives to keep his own center of gravity (i.e., the hips) below the bar, so the body will remain in a constant position and the bar has more chance of continuing upwards without any interruption caused by change of direction or balance.

Last month we mentioned our objection to the feet together style with tensely locked thighs. This tensing of the lower part of the trunk prevents the hips from being positioned under the bar, and in fact may lead to the upper body laying back, as pointed out above, in an effort to find an equable balance.

So, once again to quote Bob Hoffman, "Just stand up there and keep pressing!"