Getting Past the Sticking Point in the Press - Al Murray (1950) 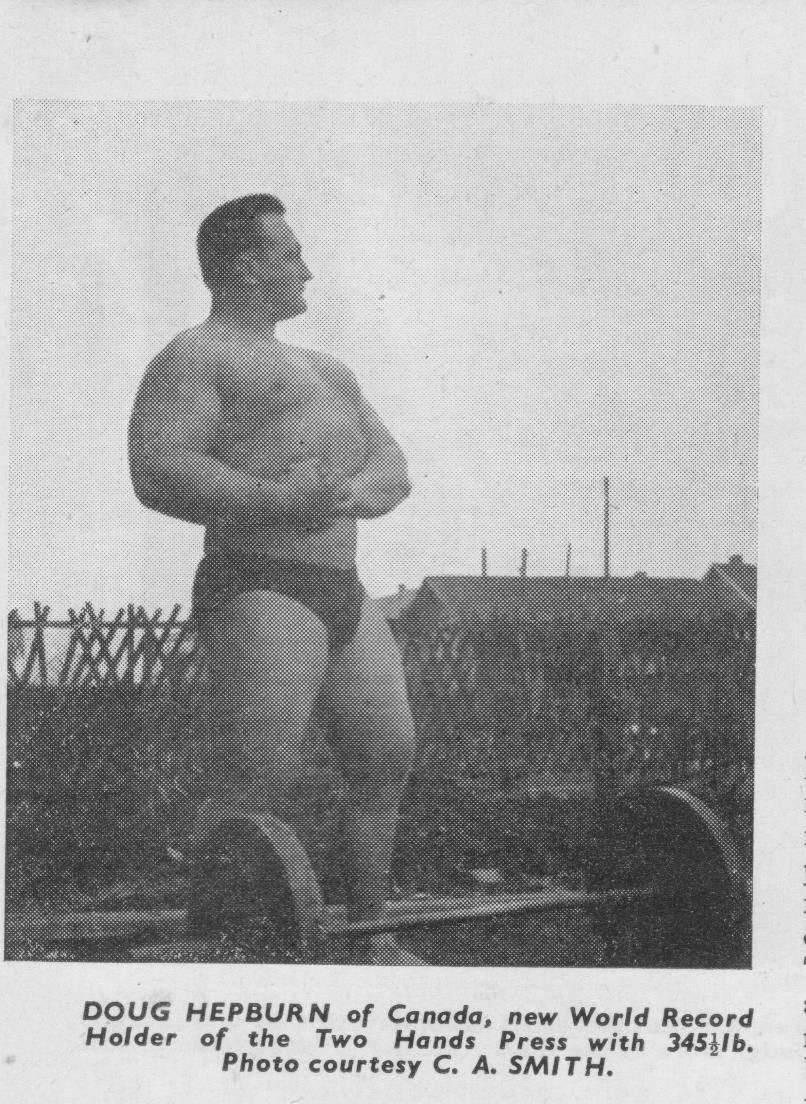 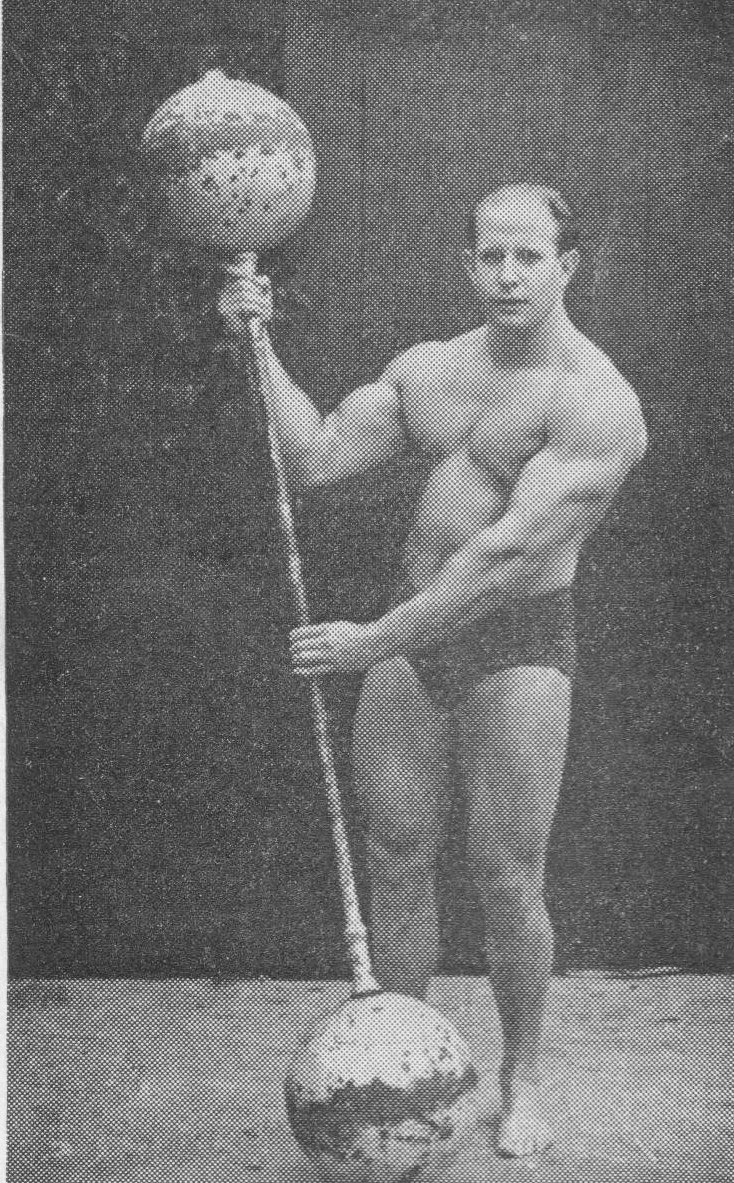 Careful observation has revealed that a number of good pressers, particularly among the bigger men, use certain movements during the Press which are of great advantage in getting the bar past the "sticking point" We believe that most of them use this technique unconsciously, and of the few who appear to use the technique deliberately, John Davis is the outstanding example. 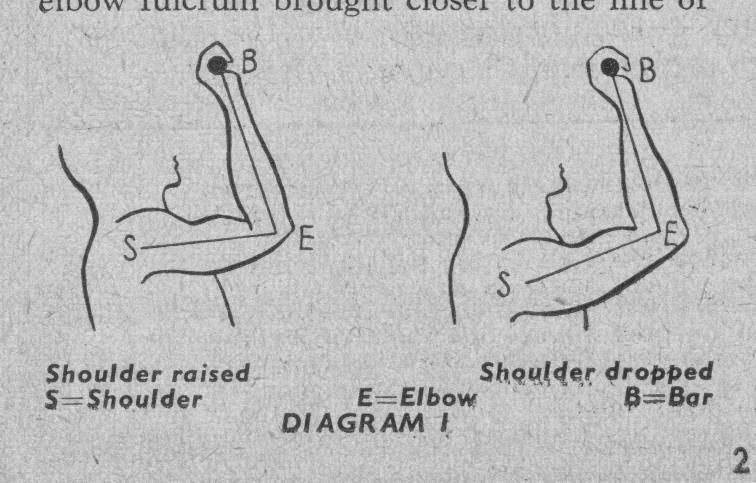 From this diagram you will observe that with the shoulders raised, the angle SEB (shoulder/elbow/bar) is less than 90 degrees, but when the shoulders drop while the bar rises a fraction of an inch, the angle SEB is considerably increased. The advantages of this movement are twofold. In the first place, the triceps muscles, which are mainly concerned with the latter part of the Press, are helped over their less powerful middle range and approach more quickly to their inner range which is the most powerful range of all muscle action. You all know from your practice of half-pressing that it is much easier to extend the arms from a slight bend than from a half-bend.

The other advantage in dropping the shoulders is that the elbows are thereby brought closer to the shoulders, which brings us to another fundamental of weight-lifting and in fact one which can be applied to many sports --

The body works at a greater mechanical action when the fulcrums (or operative joints) are brought as close as possible or into the line of power. (See Diagram 2) 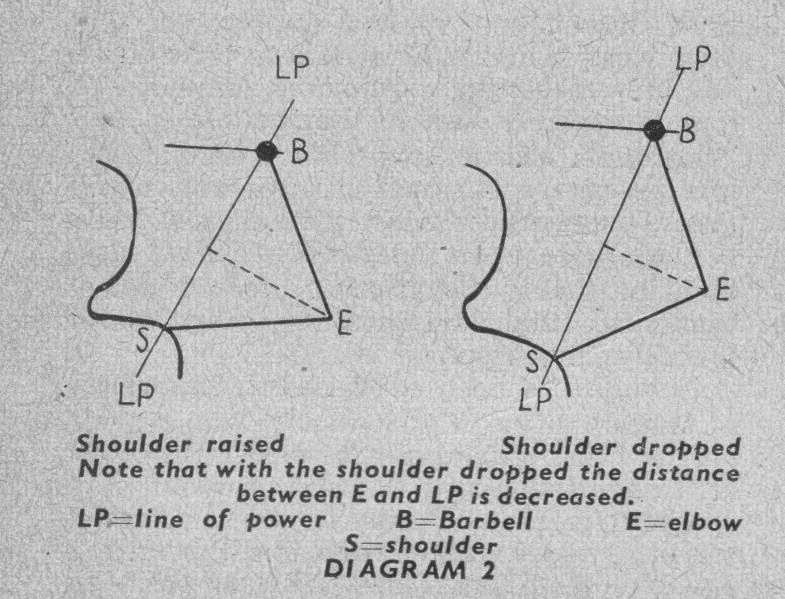 With the elbow fulcrum brought closer to the line of power which passes through the shoulder fulcrum to the hand, the whole action gains in power.

This is not entirely due, as commonly supposed, to an imperfect elbow joint in which the olecranon process of the ulna bone is so long that complete extension of the elbow joint is impossible. Lifters with this anatomical defect, which fortunately is very rare, can hold a Press quite steadily at the limit of their elbow extension.

The "soft lock" is caused by the articulation of the greater tuberosity (a rounded prominence; a large prominence on a bone usually serving for the attachment of muscles or ligaments) of the humerus against the acromion process of the scapula. The upper arm can be raised to 45 - 50 degrees above the horizontal plane before this tuberosity makes its presence felt. In a few individuals it is so situated that it impinges against the acromion process before the arms are fully locked. (See Diagram 3). 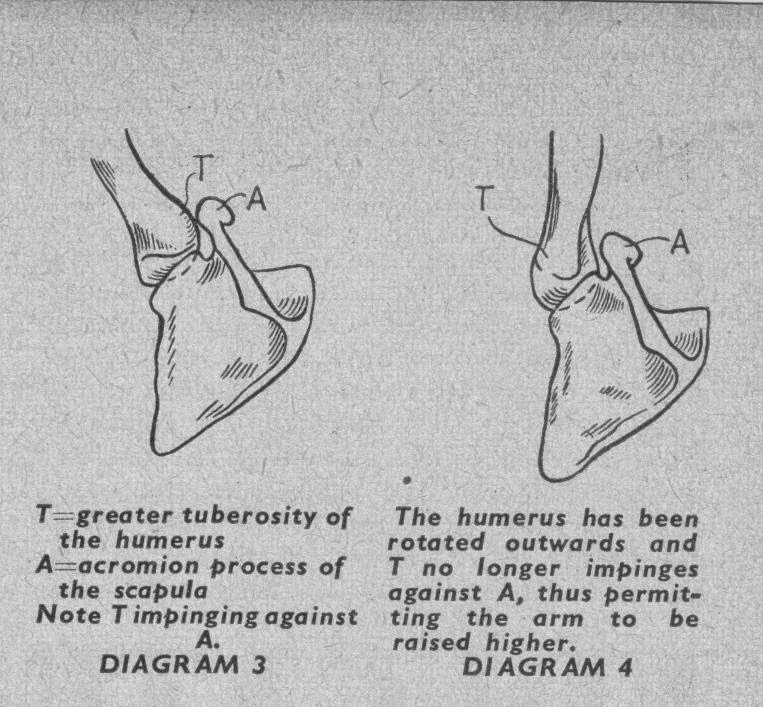 In order to remove this obstacle and thereby continue raising the upper arm, it is necessary to rotate the upper arm outwards. (See Diagram 4). But this is largely hindered by the fact of gripping the bar with the palms forward. Thus the lifter is trying to straighten his arms completely while this shoulder articulation prevents him, and the result is a "soft" or incomplete elbow lock. How then to overcome this dilemma? The answer is very simple. By taking a slightly wider grip with the hands, the upper arms do not have to be raised so high and the elbow lock can be more completely effected. This point also will be dealt with during the Snatch.

Before leaving the subject of the Press, we will dwell a little on correct mental attitude, which is so sadly lacking in many lifters. A common error is observed immediately after the clean. A number of lifters tense up during the two seconds pause, instead of relaxing in order to conserve full energy for the fierce effort of the Press itself. Too prolonged a concentration before the Press, during the approach, the clean and the pause, with the accompanying muscle tensing, can quite possibly lead to a "blackout." If a lifter assumes the Press starting position we have advocated he will find it easier to relax.

As soon as the referee signals you should respond like a sprinter released by the starting pistol -- all your mental powers fiercely concentrated on the initial drive. Drive the bar VICIOUSLY upwards and as it nears the "sticking point" concentrate even more fiercely, and FIGHT the weight even more viciously. From the physical point of view, maintain your vertical line of action and try like mad to bring your elbows closer to your ears because this will help you to get the bar past the difficult middle range muscle movement, when the bar is also farthest from the shoulder function.

In short, when you press, put everything into the start -- use a vicious jab to get momentum -- then ELBOWS IN and fight . . . Fight . . . FIGHT until the arms are safely locked overhead.

When training on repetition pressing, please do not make the usual mistake of rebounding the bar from the shoulders. STOP at the shoulders, briefly correct your starting position, then repeat the above mental and physical attack on the bar. Find where it lives, slap its wife and kick its kids. Poison the damn dog if you have to. Freeze it overnight and break the mutt into 90 shiny pieces with a claw hammer. Rage against the tiresome machinations of a dominant paradigm founded on illusion and lie, Dude.

Al Murray is not a particularly strong presser and his duties as national coach considerably curtail his opportunities for regular training, yet many club groups have seen him press 200, which is about his maximum. The reason for this is that he has the gift of intense concentration and when he presses, every fiber of his being is intent on fighting the bar all the way up to arms' length.

The Egyptian coaches make great use of applied psychology. During one of Al Murray's many long discussions with El Saied Nosseir in Holland, Al mentioned this point of intense concentration.

The great Egyptian coach's eyes twinkled and he said, "So you have discovered one of the secrets of our success. I give my boys lectures on psychology and concentration for lifting.

[N.B. - I hope to persuade Nosseir to write on the psychology of weight-lifting for the benefit of readers of this magazine - Oscar State, April, 1950, The British Amateur Weight-Lifter and Bodybuilder].

Next time you see some world champions lifting, watch their eyes closely. The Egyptians in particular, just before an all-out effort, have eyes like wild animals, so fierce is their concentration. Incidentally, it is known to psychologists that the oriental races, due to their mode of life, have a capacity for intense concentration on one specific object which is far superior to that of a European. [Welcome to the view from 1950].

Here is a very apposite [appropriate] quotation from the works of the two great physiologists Zoethout and Tuttle: 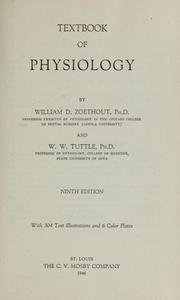 
"It will be recalled that a feeble stimulation of a motor nerve generates impulses in but a few of the nerve fibers, and as a result, only a few motor units of the muscle contract. With a stronger stimulus, more units are thrown into action and a stronger stimulus results. Sometimes we wish to lift a light object, at other times a heavier object. It is a well-known fact that because of previous experience we are able to gauge the amount of contraction necessary in each case quite accurately, using just sufficient force to lift the object with ease. The neural impulses for these contractions are the results of the activations of cells in the cerebrum of the brain. It is possible that when a light object is to be lifted, only a few cortical cells are activated and in consequence only a limited number of motor units receive impulses for contraction; on the other hand, when a powerful contraction is necessary, more motor nerve cells are activated and impulses are sent to more units. Some maintain that under ordinary conditions of life we can voluntarily, even with out best endeavor, innervate only part of the motor units of any skeletal muscles. We have heard of the marvelous strength of people under great mental excitement, such as intense fear, religious mania, etc., as also during delirious conditions. It is conceivable that in these unusual states of mind more pathways are activated and hence more motor units are thrown into action. In training, something similar may happen."


We are convinced by practical experience that the above is true and that the ability to concentrate nervous energy partly accounts for the terrific strength feats of such lightly-muscled lifters as Shams and Pete George. You too, by means of studied and intense concentration, can greatly augment the power of all your lifting movements.