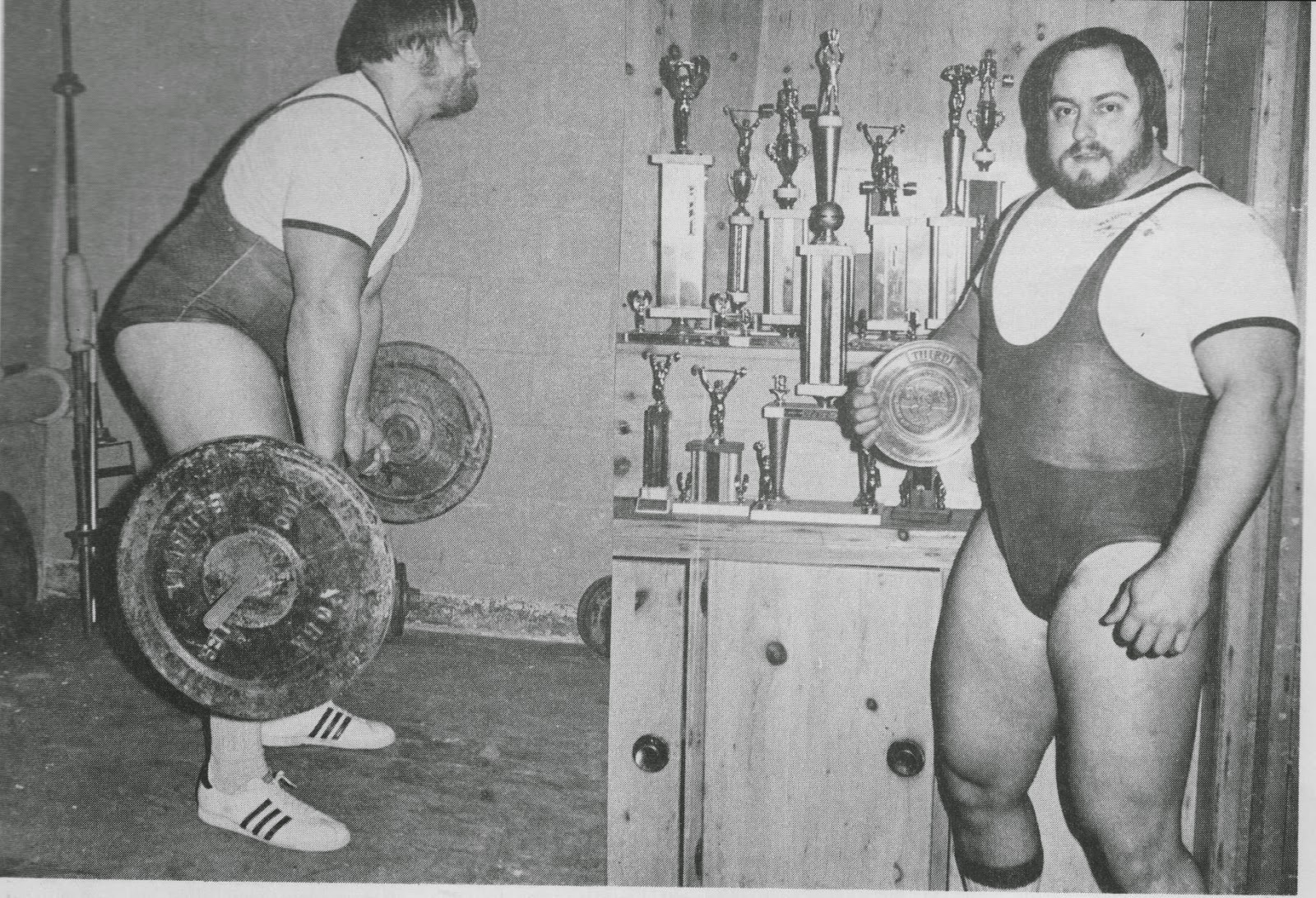 When I train for the squat everything is exactly the same as it will be in a contest. Same shoes, socks, shirt thickness and tightness, same trunks. The bar is always placed in the same spot on the back and the bar gripped the same. My belt is always on same hole and the buckle is always in the same position slightly off center of my abdomen to the right. I like to approach the bar the way Jim Williams recently mentioned in an article. I walk up to the bar, put my hands on it where I will grip it, then get under the bar positioning it in my groove on the back. I do about a quarter squat when I am under the bar and ready to go but I am applying no tension to the bar, only quarter squatting under it ready to spring. I will then look straight ahead and take a deep fast breath, exhale, take another, exhale, and take a third deep breath and immediately after I fill my lungs with air and before I exhale I stand erect, my feet still motionless. Now I step back with my right foot one step and bring my left foot parallel with the right, next step 1, 2 - boom. With this movement my feet will be in their proper stance which for me is shoulder width.

This is the spot on the platform where I will squat. After I am in this position I exhale my third breath and take two or three deep breaths and descend into the squat on full lungs and ascend on full lungs letting it out when I lock out. I like full lungs when I take the bar off the rack because it seems to make the bar feel much lighter than it is, helping me psychologically. In my mind I picture the entire squat while I am performing it. When I think squat I think of one fast continuous motion, both the down and the up part. I don't divide it into a descent, stop, and ascent. I feel the squat motion out when I do squats with a broom handle and on my light warmup reps. Also, the entire squat movement feels like it only covers the range of a few inches because of the quickness I put into it.

My general routine is:

I like to take what I call a heavy warmup single before I do my best attempt. This single tells me whether or not I am capable of a maximum or near-maximum lift on a particular day. It also warms up my legs for the heavy weight.

As far as maximum attempts go I would take one every squat workout if my body would permit it. I go max whenever I feel that I will have a good day, judging from my heavy warmup single and general feeling and attitude towards heavy lifts over a given period of time. What I mean is sometimes the body is capable of going heavy many times consecutively but too many heavy attempts get the mind tired before the body.

Assistance exercises never worked too well for me except on the deadlift where I employ heavy bent over rows to improve initial pull. In the bench press I have used with great success Jim Williams' system of forced reps, but I wouldn't call them assistance exercises, because they are nothing more than doing a basic bench press with 100 lbs more than your max capability.

What I have employed over the years is a series of routines which are simple, short and intense. I started powerlifting training in 1967 and have used only the following four routines:

I don't like to change routines and the only changes I usually make are modifications of the routine I am on. When I change a routine I know I've got everything out of it that is possible, because I stay on a routine 6 to 12 months. If a routine is sensible, it will work, but give it a chance.

Powerlifting takes style. Probably the most is required in the bench press, then comes the squat and deadlift. I feel that powerlifting should not be criticized for not having much form. I personally feel Olympic lifters with all their form can squat, bench press, or deadlift heavy and not fail or injure themselves without training in the powerlifts. I hope that my squat routines will help out the many young potential powerlifting future greats.

From talking with many Iron Game officials, it seems to them that the squat is on the way out, as the recent rumor is going around in powerlifting circles. I would like to offer a few comments on the subject. Could it be that some individuals would like powerlifting to suffer the same fate that Olympic lifting is suffering? Everyone knows that powerlifting is growing rapidly in the USA and in some foreign countries (I get at least 5 or 6 letters from outside the USA each month). It would seem to me that there are some individuals who want to ban the squat. Can these be the lifters who can't break parallel, probably because their legs are too big. Wraps are gone and a lot of men are going to lose a lot of poundage on the squat. Would it be fair to just eliminate the squat so there won't be so much cheating? In competition a lifter should be expected to break parallel. If he can't, then let him bomb out. What is so difficult about judging parallel? The squat is the basic lift of all the three powerlifts. Powerlifters will still have to squat even if the lift is eliminated. How else can they build and maintain power and control for the deadlift?

It would seem to me that there are too many powerlifters with too many excuses as to why they didn't do well with their squat lift. It is my personal opinion that powerlifting will be a better sport with the retention of the squat and the absence of the so-called "complainers."