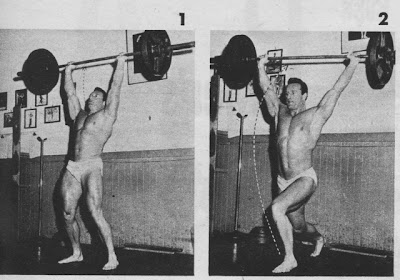 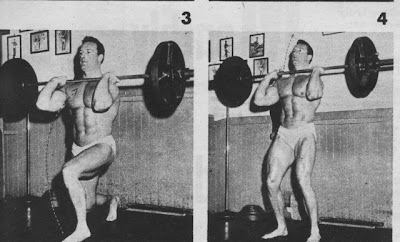 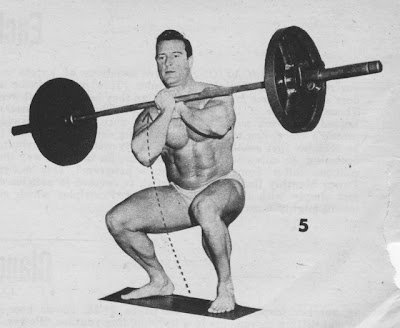 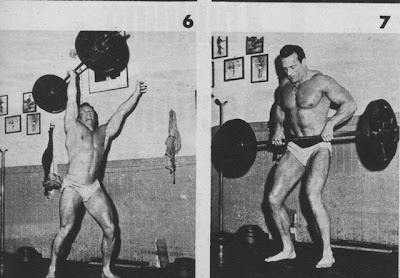 
The progressive bodybuilder is constantly looking for something new and better in his training, to assist him in gaining larger muscles and greater power. The set series, forced reps, super-sets and cheating exercises are all used, each with definite benefits over and above what he would have enjoyed had he remained in the old-fashioned routines of years ago.

However, there is still one type of training that can be followed with great benefit, which does not receive the publicity or popularity it deserves. I refer to “weightlifting-style” movements, adjusted to bodybuilding requirements. In this type of training, a whole new field of lifting expression is opened, all to the benefit of the individual.

Most bodybuilders have overlooked the possibilities of this sort of exercise, since they mistakenly consider weightlifting movements as being of limited scope, and restrictive from muscle-building values. Still, scientific analysis disproves this . . . for actually, it is in the skillful blending of straight bodybuilding movements and classic lifting movements that the individual develops maximum muscular hardness, size and greater overall power.

And even beyond this, a change from regular bodybuilding exercises to weightlifting training gives a needed variety of exercise, one which breaks sticking points, forces muscle and mind to work in a different and productive manner. This gives the bodybuilder a new training drive, one which lifts him to greater muscular heights than ever before.

This in no way means that the standard bodybuilding exercises such as the squat, bench press deadlift, curl, laterals etc. should be neglected. But, a change from them should be taken from time to time, and the weightlifting-style exercises outlined in this article followed either in their place for a few months a year, or added to a bodybuilding routine.

If such a combined weightlifting/bodybuilding program is followed, your personal benefits as a bodybuilder will be radically improved . . . you will gain harder muscularity, greater training pleasure, more power and larger muscle size. Your muscles will get a more rugged quality, one which will give them extra impressiveness. You will avoid sticking points more easily, and thereby make faster, surer gains all-round. Here are the suggested details of the training program.

Exercise 1.
Push Press. Clean a weight to the shoulders, one which is heavier than you can press in strict style. Or, if you prefer, you can take this weight from a pair of stands. The important part of the exercise is NOT getting it to the shoulders, but what you do with it after you have it there. Once the weight is held at the shoulders, bend the knees slightly, and then, straighten out the legs. At the same time, push or press the weight to arms’ length above the head. You can bend back slightly in this exercise, if in doing so you can handle more weight. After the initial body-thrust, the bar is put to arms’ length with pressing power, as this is not a jerk. Lower the weight to the shoulders, and repeat. Doug Hepburn can raise 450 pounds over his head in this manner. With practice and effort over time, anyone should be able succeed with more than 200 pounds.

Exercise 2.
Repetition Snatch. Start this exercise with a barbell on the ground, in front of the legs, as in a dead lift. Bend down and grasp the bar, making sure that the grip is quite wide, and perfectly balanced. Now, with one drive of power, pull the weight straight up, to about the height of the chest. At that point, split with the feet, extending one foot to the front and the other to the rear, and dip under the weight. Hold the weight in this position and straighten the legs, arriving at a completely standing position with bar overhead. Then, lower the weight to the ground, and repeat. A squat style of getting under the bar can also be used. John Davis currently holds the record in this lift with 330 pounds.

Exercise 3.
Repetition Clean to Shoulders. This exercise is performed identical to the last one, except instead of pulling the weight to above the head, you only pull it to the chest. Norbert Schemansky has cleaned 412 pounds to the shoulders. With practice and effort anyone can succeed in time with over 200 pounds.

Exercise 4.
Repetition Jerk. Clean a heavy weight to the shoulders, or take it off stands. Sink down a few inches by bending the knees, and then, briskly straighten them again. While doing so, push the weight up and off the chest. When the weight has reached the top of the head, split with the legs fore and aft, sinking down under the bar and catching it at locked arms’ length overhead. Come to a complete standing position. Then, lower the weight to the chest only, and repeat the jerk again. Saksanov, the 132-lb. Russian lifter, has clean & jerked 305 pounds. Anyone should be able to succeed with a 250 pound jerk over time.

Exercise 5.
One Arm Clean to Shoulder. In this exercise, stand with the barbell in front of the legs, bent over, with one hand holding onto the bar, in the exact balanced center. Now, straighten the body, and at the same time pull the weight up. When it is slightly above waist level, squat down and catch the weight at the shoulder, using the free hand to help you to hold the weight at the shoulder, as shown in the photo. Then, stand erect, straightening the legs to do so. Lower the weight and repeat. After you have gotten used to this exercise, which will at first feel strange to many bodybuilders, DO NOT use the free hand to help you catch and balance the weight at the shoulder, but do the exercise entirely with one hand, resting the free hand on the thigh to give you greater pulling power. Armand Tanny has cleaned 300 pounds to the shoulder in a correct, one-arm style. Anyone who puts in the time and effort should be able to accomplish 150 pounds.

Exercise 7.
Continental to Shoulders. This exercise is the KING of power lifts. Practice of it will give you all-around power unmatched by any other movement. Norbert Schemansky has succeeded in raising 450 pounds to the shoulders in this manner, one of the greatest feats of power ever performed by a man of his bodyweight. To practice this movement, you need a strong, well-made lifting belt with a big buckle in the front. Raise the weight from the ground up to this belt, making certain the bar is securely held by the belt. Now, bend the knees, then straighten them out quickly, at the same time pulling up with the hands, lifting the weight to the shoulders. Lower the weight to the ground and repeat.


The very first workout you take with these movements will find you sorer and stiff . . . just like a beginner, even if you have been bodybuilding for some time. Your trapezius, lower back, hips, sides and legs will all be sore. BUT – you will feel a new glow of power, an ambition to get ahead in these new and wonderful exercises. Every workout will find you stronger . . . able to use more weight in the movements. And to match this increase in strength you will notice a more solid musculature over time. These movements are quite tough and dynamic, but they can definitely be rewarding.