Using the Arms to Best Advantage in the Snatch - Charles A. Smith 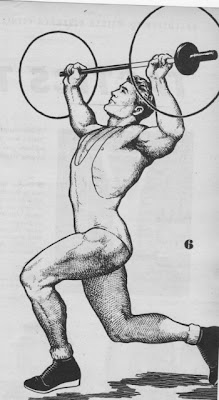 Using the Arms to Best Advantage in the Snatch
by Charles A. Smith (1954)


I was once asked why I call this series “The ABC’s of Lifting”. My companion was a famous international authority, and he was of the opinion that the title was a little over the heads of my readers. “Smithy,” he said, “I doubt whether 20% of the men who read your articles will appreciate the reason, the real meaning I should say, behind that heading. Why have you used it when something more to the point and less obscure would have served the purpose just as well?”

My reply was to the effect that the title was entirely in line, that the articles were written not for advanced men but for beginners, fellows who had to learn to lift step by step. When we start school, take our first English lesson, we don’t have Webster’s dictionary, Roget’s thesaurus and a volume of synonyms and antonyms thrown at us. Instead, we are first taught the alphabet, then simple three-letter words, the simple rules of grammar and so on, stage by stage.

We learn that words are not single things in themselves but are made up of letters and syllables. And, later on, if we become weight lifters, we soon find out that there are more things to the Iron Game than grabbing hold of a bar, picking it up, and putting it down. We learn that every action, every single movement COUNTS, that a press or a snatch is made up of a hundred and one things, each of which in its own way influences the lift as a whole.

I do not agree that the title is above the heads of my readers. I feel that all who read these articles will appreciate why it was chosen above a more catchy phrase. It has been said that knowledge is power. The more we know about a subject the more thoroughly will we understand it. The more we know about the basic, simple things, the better will we be able to understand the more difficult phases. It is impossible for us to READ if we cannot learn the alphabet. It is impossible for us to lift efficiently and make the most of our strength in a particular lift unless we thoroughly understand what effects our actions have on that lift, why we are guilty of certain faults, and how these faults can be corrected.

It is impossible for any man to know too much about lifting. And it is impossible for any man to know everything there is to know about the game. Unfortunately, there ARE certain individuals who CLAIM personally they are the greatest coaches of Olympic lifting in the world. Rather should the attitude of these individuals be . . . “The more I learn, the more I realize how LITTLE I know.” There are some fortunate lifters who are athletes by birth and instinct. To these men, the three Olympics come as natural as breathing. But the vast majority of us have to work very, very hard for what we want, and every pound gained on a total represents long hours of tough training, lifting grinds and sweat. It is to these men that this series is dedicated, not to the man who has every natural advantage.

You must forgive me if I constantly harp on the same old theme, but I believe it is most essential to hammer home the point that CLOSEST ATTENTION TO SMALLEST DETAILS IS WHAT MAKES A MAN A SUCCESS IN ANY FIELD OF ENDEAVOR. I believe that these articles serve a definite purpose in that they help the beginner to learn a good style in less time than it previously took. And as I’ve said before, I’ll be more than satisfied if but a single strength athlete profits by them.

In this article I’ll deal with arm action and its importance in the Two Hands Snatch. Remember, this lift is a coordination of effort between the arms, back, thighs and shoulder girdle muscles. If one of those groups acts out of line with the others, then you are not going to lift your best poundages.

Most lifters think arm and leg actions are separate, that one can be thought of apart from the other. This is, of course, a mistaken idea and we’ll see now exactly what part the arms play in the lift. Some of you may have seen lifters who started the pull with bent arms, or else pulled the bar more with the arms at the start of the lift so that the weight was already as high as the hips or waist before the back had hardly started to straighten out in the pull.

Starting the pull with bent arms is seen more often in the lifter who uses a DIVE instead of a GET SET stance. Usually he dives so fast and with such vigor that his hands bang on the bar, unlocking the elbows and causing him to commence the pull in a wrong position. Bent arms at the beginning of the pull makes the muscles of the back and thighs start from a slightly different position (Illustration 1), and altho the difference may not be noticeable, the muscles have to work over a greater range. To illustrate what I mean, hold a dumbbell in each hand. Stand on a box. Sink down into a DEEP squat, the bells traveling each side of the box. Then recover to upright position. Now, sink to a PARALLEL squat and note the greater ease of recovery. The same principle applies to deep squats and half-squats. A greater strain is placed on the back with a bent-arm start in the snatch and the main force of the pull is lost through lack of coordination.

Another common fault is the second (Illustration 2) in which the lifter makes the major pull with the arms, and then attempts to speed it up with the back and legs. The consequence of this fault is wrong pull direction, the bar traveling out and away from the body. For the benefit of readers, I repeat the correct “get set” stance (Illustration 7). Actually, when you begin the snatch, there should be no deliberate effort to pull with the arms, since these are ropes or cables which transmit the power of the back, thighs and shoulder girdle to the weight.

Leg and back drive take the weight approximately waist level. The task is then boosted by the muscles of the shoulder girdle, the deltoids and trapezius. If you’ve been following my bodybuilding specialization articles, you’ll know that the deltoids raise the arms to shoulder level position, while the trapezius muscles raise the shoulders themselves. TRICEPS AND BICEPS SHOULD BE RELAXED. If they are not they will interfere with your pull.

If you keep the barbell into the body, you will do so because your wrists and elbows are playing a correct and very important part in the action. Many lifters make the mistake of pulling the elbows back. Illustration 3 shows the correct position of the forearms and elbows. From this point the lifter should concentrate on pulling the bar as HIGH as he can and maintaining the pull. He must NOT STOP PULLING AT ANY TIME.

One fault the lifter is liable to make is to pull the elbows back before the weight has traveled high enough. This raises the forearms from their almost perpendicular position with the floor to an almost horizontal position (Illustration 4), and causes a swing OUT away from the body.

When the elbows have reached the highest point sideways and UP, the wrists then take over the task of maintaining the pull and getting the bar into a locked out position. At all costs you should keep them ABOVE or level with the bar as long as possible. I believe Al Murray has already pointed out this somewhere in my memory does not fail me (Illustration 5). The feet are splitting at this stage and the body is dropping down, but that pull MUST be kept up.

At this stage the forearms and wrists are “flipping” the bar up and the forearms are assuming a perpendicular position, this time with the bar on top. Care should be taken that the flip doesn’t thrust the bar too much to the rear (Illustration 6) and cause you to lose the lift. Don’t forget to keep the trunk upright and the arms thrusting straight up from the shoulders. Don’ let them “angle” back, even though slightly, or you might find yourself dropping the weight back of you, especially if your shoulders are extra flexible.

As I’ve pointed out before, all the muscle groups taking the weight to arms’ length MUST WORK TOGETHER. No on group should play a major role but all should complement each other, otherwise there will be a lot of work thrust on one group with little to show for the effort. In a future article I’ll discuss the role of the hips. In the meantime, practice correct snatching position and arm action. Just as the muscles work as one, so technique and strength back each other up. Neither is any good without the other.