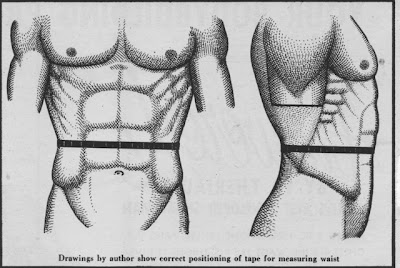 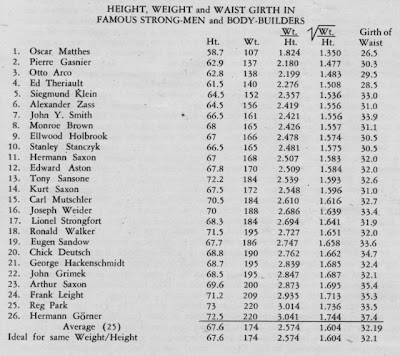 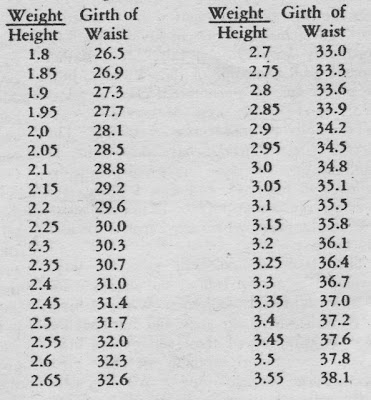 Is Your Waist Properly Proportioned
by David P. Willoughby (1954)


One respect, at least, in which the average bodybuilder of today does not equal the development of the best-developed oldtimers is in the muscles of the waist and abdomen. While it is true that today’s bodybuilder has at his disposal a more extensive assortment of apparatus than ever before, it is equally true that he has a tendency to concentrate on certain parts of his physique at the expense of neglecting (or at least giving insufficient attention to) other parts. That this is so is proven by the relative development of various parts of his body as indicated by their measurements. At no time in history have physical culturists, as a class, been able to show such a great development of the chest muscles as compared with the waist muscles as is the case today. Whereas the ideal ratio of chest girth to waist girth – when a proportionate amount of exercise is given to each of these parts – is a 4 to 3, or 1 and 1/3, in many of today’s bodybuilders the chest/waist ratio is 1.40 or 1.45, and in some cases as high as 1.50. In other words, where a man with a 30-inch waist ought to have a 40-inch chest, actually he may have a chest that measures anywhere from 42 to as much as 45 inches.

In some quarters the difference that a bodybuilder can show between his normal chest girth and his normal waist girth is taken as a basis of comparison, and the greater the difference thus shown, the better-developed is the model considered to be. This is a mistaken notion. While an excessive chest-waist difference may in some few cases be the result of a disproportionately large development of the chest (usually only the external muscles), in the great majority of such cases it is due rather to insufficient development of the muscles of the waist. That is to say, rather than to consider that a model with a 45-inch chest and only a 30-inch waist has a chest 5 inches too large, it is more likely that he has a waist which is insufficiently muscled and which is 3 or 4 inches too small. It cannot, in this writer’s opinion, be stressed too often or too strongly that the big chest vs. small waist proportion (to which many a present-day bodybuilder apparently aspires) is a false ideal. Rather than to look upon one of the V-torso boys as an example of phenomenal chest development, it is equally easy to regard him as an example of midsection weakness. The average wrestler would have no trouble in standing one of these wasp-waisted bodybuilders on his head, and this, I think, is a practical argument in favor of robust waistline development, which any capable wrestler has to have.

The classic examples of powerful waist development are, of course, the statues made by the old Greek sculptors. While I have never read where any critic has felt that the chest development of these statues was inadequate, nevertheless in them the chest girth measurement averages only 1 and 1/3 times the waist girth – the same as in the modern ideal athlete. But even these measurements do not tell the whole story, since below the level where the waist girth is taken one may have either adequate or inadequate development of the straight front and external oblique abdominal muscles. In many a modern bodybuilder the muscular development of the latter parts is conspicuous by its absence. Yet in the ancient Greek statues, without exception, the abdominal and oblique waist muscles are shown as being of a massive, solid, exceedingly powerful development. Either the old Greek sculptors exaggerated the development of the waist muscles in their statues, or the models who posed for the statues actually possessed a higher degree of development of the waist and abdominal muscles than do strong-men of today.

However, if we take for comparison with the Greek statues the best modern examples of waist development, it will be seen that the latter models come sufficiently near to the Greek ideal in the waistline muscularity to at least indicate that such muscularity is possible. But is should be noted that the modern models who come closest in their abdominal development to the ideal depicted in ancient statues are men who gave a great deal of attention to their waist muscles. Most of them were capable exponents of the bent press and two hands anyhow lifts, and both these lifts put a great tax on the muscles of the sides. Oscar Matthes, Pierre Gasnier, Eugen Sandow, Edward Aston, Lionel Strongfort (Max Unger) and Arthur Saxon and his brothers Hermann and Kurt all possessed splendid waistline muscularity and were constant performers of the bent press and other side-developing lifts such as the one hand snatch, one hand swing, and so on. Again, certain other athletes who did not specialize in the bent press nevertheless attained superb waistline development by giving much practice to special exercises for the waist and abdominal muscles. Among these models may be mentioned Otto Arco, Staff-Sergeant Tom Moss, Siegmund Klein, “Samson” (Alexander Zass), Monroe Brown, Tony Sansone, Carl Mutschler, Chick Deutsch, George Hackenschmidt (at 195 pounds), Reg Park and Hermann Goerner. There is no more satisfying attainment, or no more important possession from the standpoint of a strong-man, than a fully developed set of abdominal and side-waist muscles.

We have witnessed a period during which extreme emphasis has been given to the development of the chest and upper arms (extensors). This, in turn, may be attributed to certain exercises that have come into special popularity during recent years, such as the bench press, wide-arm chinning, lateral raise lying, pressing on the incline bench, etc. Now, that records in these lifts and exercises have reached a sufficiently high level to last for a while, how about giving the triceps, the pectorals and the latissimus muscles just a reasonable amount of exercise and no more, and concentrating, for a change, on the abdominal and side-waist muscles?

It will be noted, in the table shown above, that the actual average girth of the waist in the 25 subjects selected corresponds almost precisely with the predicted ideal girth for the same bodyweight per inch of height. But it should be further observed that this correspondence has been obtained only by including a number of subjects having large muscular waists as well as others having relatively undeveloped muscles in this part. If the only subjects used in the study had been present-day bodybuilders, the average waist girth would be at least an inch smaller than it is.

Relatively, the smallest-waisted model whom I have included in the list is Ed Theriault, whose waist is a full 2 inches smaller than it should be for his weight/height. Next is John Grimek, whose waist is 1.7 inches too small, and third is George Hackenschmidt, whose waist when he weighed 195 pounds and was in trim muscular condition was about 1.3 inches too small. On the other hand, of large muscular waists the relatively largest was that of Hermann Goerner. whose 37.4-inch waist was 2.6 inches oversize for his weight/height. Second was John Y. Smith, whose waist was 2.5 inches too large. It is significant that both Goerner and Smith had extraordinarily well-developed lower-back muscles, and these to some extent doubtless accounted for their large waist girths. Thirdly, Siegmund Klein had a clean-cut, muscular waist that was 2 inches too large relative to his weight/height. Would he have been as strong all-around if he had a waist 2 inches too small rather than 2 inches too large? Yet the “wasp-waist” ideal persists in the minds of many uninformed bodybuilders, particularly in this country and in England. In most European countries no such view is held, and one German authority has criticized my ideal standard as having the waist too small. Nevertheless, some bodybuilders would have a waist 2 inches or more smaller than by standard!


The best remedy for the present tendency to small waists is a return to such lifts as the bent press, the two-hands anyhow, and one hand lifts such as the snatch, swing, and jerk (particularly the one-hand clean & jerk). Specific exercises in the gym, such as abdominal raises, side-bending with a weight overhead, etc., will go a long way toward developing a strong waist region, but they will not altogether take the place of heavy one-arm lifts overhead in which the side-waist muscles are compelled to balance the body (and so to become strong and well-developed from all angles).

The second chart shows what a properly-sized waist should measure in relation to a man’s bodyweight per inch of height, in conformity with the average of 25 models of waist development used in my table, and also in accordance with my ideal standard based on strongmen and bodybuilders generally. To see what your waist should measure, simply divide your weight in pounds by your height in inches and find in the left-hand column below the figure corresponding to this. Opposite that figure, in the right-hand column, will be your proper waist girth. If your bodyweight per inch of height comes to some figure in between those listed, take as your waist girth a proportionately in-between figure in the right-hand column.