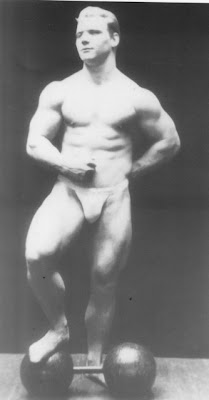 Strength Improvement
by Richard A. Berger (1972)

An improvement in strength occurs by increasing the size of muscle fibers and/or by recruiting more motor units during a contraction. Training to achieve muscle hypertrophy and greater recruitment involves progressively increasing the load lifted as the muscle improves in strength. The ideal training program seems to be specific to the individual, however, there are certain limits within which “ideal” programs usually fall. Some of the limits have been disclosed by research studies which compared different numbers of sets, repetitions, sequences at which various loads are lifted in sets, and numbers of training days per week. One drawback in these studies was that the experimental period never exceeded 12 weeks. The research conclusions and the studies supporting them are here presented.

1. Training for three sets each session, three times weekly, is more effective for increasing concentric strength than one or two sets per session (2).

3. Overload training with weights of about 80 or 90% of maximum, twice weekly, and maximally once weekly, is as effective for increasing strength as training maximally three times weekly (4) (5).

4. Improvement in strength will occur similarly by training with light loads and working up to heavy, or vice versa. (6) (7) (8).

Since these results are limited to college age males with little, if any, previous experience in weight training, and to 12 weeks at the most, they are not necessarily valid for competitive lifters who have been lifting for several years or more. However, it is probably wise to train within the limits established by research, i.e., keep the repetitions between three and nine most of the time, and perform at least three sets. The number of sets for best results is not known, but for most lifters the sets should number at least five or more, working up from lighter loads to assure a proper warmup. Certainly, a minimum of three training days a week is necessary with an extra session or two a week, provided the lifter can sufficiently recuperates between sessions. The object is to accomplish as much work as possible with heavy loads and, therefore, improve in the physical qualities of strength and endurance.

Research findings in strength have provided some interesting training implications. Berger and Hardage (1) showed that LIFTING A MAXIMUM OR NEAR-MAXIMUM LOAD FOR EACH OF 10 REPETITIONS WAS MORE EFFECTIVE FOR INCREASING STRENGTH THAN PERFORMING 10 REPETITIONS WITH THE SAME WEIGHT. To maintain a maximum load for each of 10 repetitions, the weight had to be decreased after each lift. It is possible that training for 10 repetitions with maximum loads each rep is more effective for increasing strength of experienced lifters than lifting the same weight as is usually done. Apparently, training maximally each rep has more effect on muscle hypertrophy and/or in the recruitment of motor units during a lift.

One advantage of training with 10 maximum or near maximum repetitions is that a greater “pumping” effect occurs in the muscles than when 10 reps are performed with the same weight. This happens because maximum contractions require more energy and result in a large accumulation of waste products. Also, the need for nutrients by the muscle cells to replenish the energy resources is greatly enhanced. To remove waste and deliver nutrients to the muscle, a large blood supply is necessary. It is this accumulation of blood that gives the “pumping effect.” There seems to be a relationship between pumping a muscle and muscle hypertrophy, based on empirical evidence of bodybuilders, when loads are heavy and reps are limited to 15 or less. However, the relationship has not been substantiated by research.

Another advantage over training with the same weight is that more motor units are recruited per rep on the average. It is possible that training which elicits more motor units each repetition will condition the neuromuscular mechanism to make readily available a greater recruitment of motor units during a single maximum effort.


One way to train for more recruitment of motor units involves STRETCHING THE MUSCLE BEFORE A CONCENTRIC CONTRACTION. A muscle will contract with more force, as a consequence of greater motor unit recruitment, when it is stretched first. Therefore, to elicit greater recruitment in training, stretch the muscle as much as possible before a concentric contraction. Here I am not referring to static stretching before exercise, but the actual stretch position of the muscles before a lift. Although the increased stretch of muscle also increases motor unit involvement, this does not mean that more weight will be lifted. The leverage may become less favorable as a consequence of stretching. There are many examples of improved performance by taking advantage of stretched muscles and their greater force in contraction. Backswings in tennis, in throwing a baseball, in shot-putting, and in jumping forward vertically are a few activities where stretching muscle tissue increases the force with which the arms are moved forward and, thus, improves performance.

Another way to increase motor unit recruitment in training is by CONTRACTING A MUSCLE CONCENTRICALLY IMMEDIATELY AFTER A FAST STRETCH. Research has shown that this permits more weight to be lifted than when the weight is stopped for several seconds before lifting. Many movements in weight training are made which take advantage of a fast stretch followed by a concentric contraction to lift more weight. When doing a bench press, lowering the weight from extended arms to the chest, and immediately extending the arms permits more weight to be lifted because of greater recruitment of motor units. The same effect is observed in a standing press when the load is lowered from an overhead position to the shoulders, and then lifted. Lowering the weight stretches the triceps, while raising the weight is done with a concentric contraction of the triceps. There may be some bouncing effect off the chest or shoulders which may add to the amount lifted, but this effect is in addition to the effect caused by increased recruitment of motor units.

Taking the effect of possible bouncing and fatigue due to the first press into consideration, notice the differences in the first and second reps of a standing press. When performing a set of three, the second rep is sometimes easier than the first.

Perhaps if weight training programs emphasized training techniques which maximize the recruitment of motor units, more improvement in concentric strength may occur than by the present methods of training. To summarize, increased recruitment occurs in overload training by:

1.) Maximum or near maximum, concentric contractions performed each repetition in a series of repetitions.

2.) Stretching a muscle prior to a concentric contraction.

3.) Fast stretching of a muscle immediately followed by a concentric contraction.

Much research needs to be done to test the hypothesis that training emphasizing motor unit recruitment, employing heavy loads, is most effective for increasing muscle strength.

1. Berger, R.A. and Hardage, B. “Effect of Maximum Loads for Each of Ten Repetitions on Strength Improvement.” Research Quarterly, Vol. 38, Dec. 1967.

6. Henry, C.G. “A Comparison of the Effectiveness of Two Methods for the Development of Muscular Strength.” Unpublished Master’s Thesis. State University of Iowa, 1949.