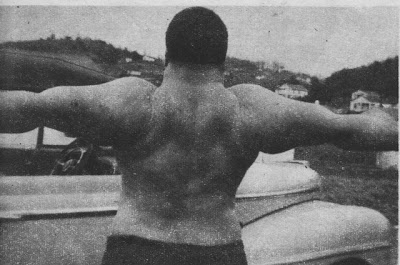 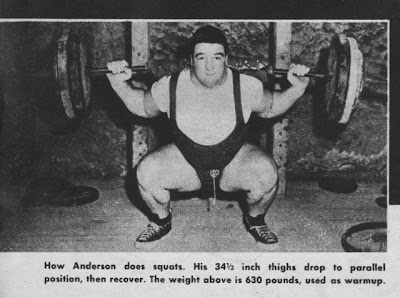 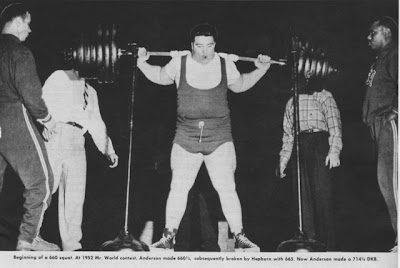 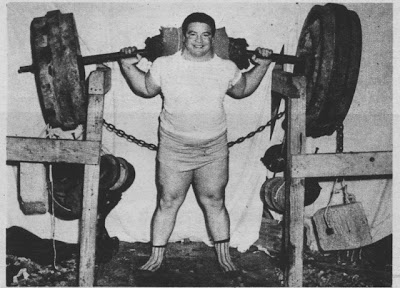 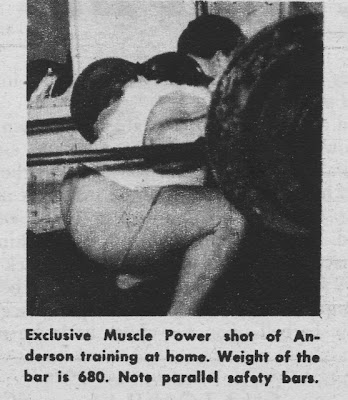 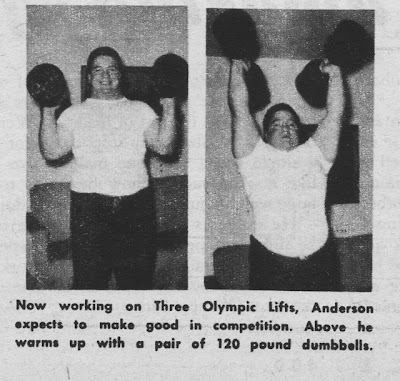 
In relaying to my readers a brief factual picture of the greatest strength sensation of modern times, let me first mention that Paul Anderson, a 20-year old lad in Tennessee, has arisen from obscurity to world fame in a little over one year’s time. But, Paul is an exception for he was born to be powerful. At present writing he weighs 295 pounds. When he was 12 years of age he weighed 160; at 15 he tipped the scales at 200; at 16 he was around 210; at 17 his weight went to about 230; at 18 he weighed 250; and at 19, 270 pounds. So, you can see that he was a mighty husky kid and was obviously destined to become a human powerhouse. His parents are of average build and come from larger parents themselves, so Paul may possibly inherit size from his grandparents.

His stocky build at 5’ 9” in height is one item and his tremendous power is still another. To give you an example of his natural strength, he first touched a barbell in February, 1952, and he tells me that when he made his initial attempt at a squat he suddenly found himself under a barbell that was fully loaded and upon a rack, and which weighed 400 lbs. Paul got under it. Mind you, he had never attempted a squat. However, upon once adjusting to this 400 lb. barbell upon his upper back, he made TWO full squats with this amount of weight. This first feat offers concrete proof that Paul’s legs were naturally powerful and so was the rest of his body. Were this not so, it would have proved absolutely impossible for him to perform even a single squat, let alone making two – just because he felt like it. And such is how he trains today – works with his huge weights just because he enjoys doing it and feels like it.

Anderson exercises every day and three times daily. However, he limits his program to but two repetitions at each of his thrice-daily training periods. He works his legs exclusively every other day and then, on the alternate day he practices the three Olympic lifts, which is something he but recently adopted, as his interests in training are spreading beyond the bounds of pure squats. His squats have been done because he liked them ever since he made his first attempt and so, these squats becoming like play or enjoyment to him is why he has kept at them for a little over one year. And during that time his legs grew considerably more powerful so that, today, he uses 650 lbs. on the bar for two of his daily squatting periods and then uses 680 on the third occasion. The mere glance at such record-breaking poundages is instantaneously impressive, but when one digests them after a few extra thoughts, they become absolutely amazing.

I try to imagine what the world’s reaction would have been if I had written, a few years ago, about someone being able to squat with 680 on the bar and perform a deep full squat at that! People might have considered me as a bean soup burper, or else a bit screwy in the noodle; yet here are the words in living form of a young fellow named Paul Anderson. And not only does he perform one squat with such a tremendous weight – he does it at each training period, not to show off, not even to give a thought to a record, but because he LIKES to do it.

It was with difficulty that I induced Paul to talk, for he is extremely modest and a bit on the shy side. His amazing feats are as nothing to him except that they bring him enthusiastic elation because of the actual enjoyment he derives from training in such fashion.

Not knowing actual records in similar attempts, I might state that I don’t anyone in the world has ever shouldered 1,570 lbs. as Paul has done via a one-third squat start. To accomplish this, he first loads the bar with special and huge plates which weigh 775 lbs. He places between these plates and which hide between the grooves, four 12½ lb. plates and one 15-pounder. Then, to the 45-lb. bar he ropes and chains two 100-lb. dumbbells, two 55-lb. rollers, two blocks of concrete weighing 85 lbs. each, plus a barrel filled with weights which add another 75 lbs. The strong chains must also be considered for these weigh about 30 lbs. So, if you total the above figures you will get a poundage of 1,570 or thereabouts, as I have not mentioned the slight weight of the heavy padding which Paul uses on his upper back. And to further show you the modesty that this lad possesses, he gives out the total poundage which I have outlined as only 1500 pounds. He forgets all about the chains and the hidden small plates between the extra-large ones. And if I were to predict at this point that Paul Anderson will, one day, perform this exact lift with one ton loaded upon the bar, I sort of feel that my congregation will be inclined to believe me. And if I also predict that Paul Anderson will, one day, perform a full squat with 800 lbs. on the bar, will you doubt me? I make these statements because I honestly believe that he has not, as yet, learned his full power nor does he realize his potentialities. (Anderson recently made a DKB with 714 lbs. Editor).

Lately he has added a few other movements to his training, as he is becoming interested in the three Olympic lifts and has decided to try his luck with them. In other words, he is beginning to enjoy them, too. His initial attempt at them was in December, 1952, which is five months back, at my present writing, yet last March, 1953, he entered the Dixie Championships and did a press of 300, snatch of 250, and a C&J of 325, all of which were done in sheer strength, power-style, without much of any leg work. He won the C&J event. Just imagine what Paul might accomplish if he could master the timing of the leg splits! He did all his lifts without moving his feet. And to further his latest enjoyment with the three lifts, he does a little dumbbell pressing with 120-pounders, just to limber up. But he rather seriously is interested in dead lifting and has added that to his training days with Olympic lifting. And just recently he has become slightly interested in bench pressing and as might be expected, is now using 410 lbs. However, I once more predict that this poundage will soon leap to around 500 because I recognize the latent power within this remarkable fellow. In plain words, Paul doesn’t actually, as yet, know his own strength. He will probably find out what it is when he buckles down to seriousness and competition as a change from pleasurable activities. Can you possibly imagine how wonderful it would be if Paul Anderson, John McWilliams, Doug Hepburn and Mac Batchelor could all train together! If such could only be possible, there would be world’s records made which would stand for a long, long time, for enthusiastic competition would drive their marks higher. Now it seems to be up to Paul to blaze the trail without being forced to try harder week after week.

Paul also tells me he does not eat too much – about average, he thinks. However, he drinks seven quarts of milk daily, not to put on weight, but because he likes milk.

He plans to enter professional wrestling but not until he has first tried out Olympic lifting. Paul figures that in about two more years he ought to be able to master the quick leg splits and style so essential for the Olympics, rather than add pure power as he uses today. Again my readers will have to stretch their imagination as to what Paul might accomplish at such time. All of us have to wait, watch, and learn. Meanwhile, the suspense is awful.

He is certain that he will “take” to wrestling for he says he likes the thought of it, so when that day comes, I am sure that he will make good right from the start. In fact, I have spoken to several wrestling promoters and from what I have related, he is practically booked right now.

Here is an honest fellow who would rather tell people that whatever he does is really less than it actually is. He claims to be his own most severe critic and therefore, does not believe in fooling even himself, so when he lifts 1,570 lbs. and tells others that it weighs 1,500, he sort of believes the latter himself and forgets the trivial extra 70 pounds. And so it is with his bench pressing. He uses the same grip with that as he does with an overhead press and this grip is a medium one with his hands about 20” apart. The fact that he is not a bit concerned with his present totals of 850 of so, and allows them to be known, proves that he owns inward confidence and enthusiasm for great betterment which will surely become a reality. In considering the power of Paul Anderson, I am held astounded! And I am also mystified by the way he can support, after the heave-ho, that 1,750 lbs. and stand facing the camera and smile! Also, to think that he only does such a lift to strengthen his legs and hips and thereby makes it a commonplace exercising movement. Anyway, I feel that the name and photographs of Paul Anderson will disturb the minds of everyone just as they have to my own. His accomplishments seem to haunt you!