"Thousand and one Exercises" - George Walsh 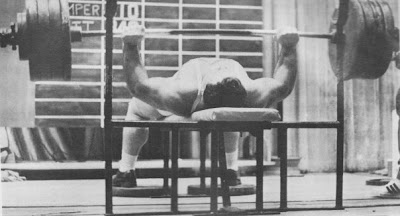 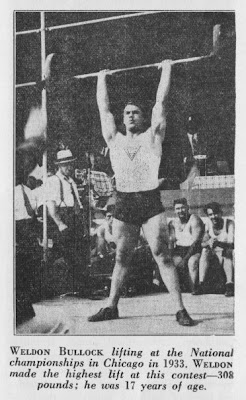 “Thousand and one Exercises”
by George Walsh

A famous American authority urges bodybuilders to practice what he calls the “thousand and one exercises”. By this, of course, he means that faster and better results will be achieved if an enthusiast becomes an all-rounder in training and devotes at least some attention to every good exercise he encounters.

Another American authority advocates the selection of four or five “fundamental power” movements and declares that, if wisely chosen and concentrated upon with sufficient patience and determination, they will carry the lifter to the utmost limit of his possibilities.

Neither authority, in my view, is correct. But I have to admit, in all fairness, that neither is completely wrong.

There are certainly at least one thousand different exercises which can be carried our with weight training appliances alone; and many of them are good. A man whose repertoire of lifting movements numbers fifty is quite likely, at the peak of his career, to be a more complete and perhaps a better developed athlete than the man who knows but ten.

I say it is likely! It certainly isn’t inevitable. Versatility and frequent changes of routine are beneficial for most and absolutely essential for many lifters; but they have no virtue in themselves. There must be some degree of continuity in the practice of any exercise of arrangement of exercises if they are to produce the maximum of results; and no lifter can ensure the required continuity over the range of a thousand different exercises, however long his training life.

Four or five movements – whether you call them “fundamental” or not – are certainly sufficient to bring a man to the limit of his possibilities. Two, in fact, are sometimes sufficient, as the remarkable achievements of Indian athletes who practice only squats and press-ups have so often proved. One exercise alone might do it – though it would, I imagine, require a degree of patience surpassing even that of the Indians for a man to refrain from all but one solitary exercise.

But a bodybuilding exercise isn’t and cannot be a static and unchanging movement like a conditioning or corrective exercise. If it is to be effective the resistance must be increased or the number of consecutive repetitions multiplied. In the majority of cases – especially where weights are involved – after a time such advances can only be secured by an alteration in position. And so, in fact, it becomes a different exercise.

The truth is that there is no one exercise which is essential to the building of a strong physique.

Touni’s gigantic musculature was built by the practice of the three Olympic lifts and one or two associated movements. Sandow’s revered physique owed nothing at all to the Olympic lifts – of which, save for a very crude version of the press, he was entirely ignorant – but was fashioned by the handling of weights in a style which the Egyptian strongman has never attempted.

It has happened more that once that two splendidly developed men have presented themselves before me in a physique contest having in common only a near approach to perfection and not, apparently, the slightest similarity in the exercises they have performed to reach the finalists’ stage. Out and out Olympic specialists – men who have never practiced anything but an Olympic lift or something closely associated with it – have ranged before me by the score.

I have examined – and sometimes appraised most highly – men who have used weights only experimentally or under protest. I have often accorded my vote to a man who had never, in regular training, lifted anything more than his own or his partner’s bodyweight!

So, though it is true enough that four or even lesser number of exercises are sufficient to bring a man to the limit of his possibilities, it is quite obvious that no one group possesses this quality exclusively. Not any group of four, but certainly many quite different groups will do the trick.

I have known major bodybuilders who avoided the chief danger inherent in the “thousand and one exercises” creed (that of using an exercise for too short a space of time for maximum results) only to make the mistake of following routines which are badly balanced. I have known still more, of course, who completely ruined their chances of success by selecting and following for a considerable period a limited number of exercises which, together, formed a badly balanced schedule.

It is comparatively easy for a novice to avoid the dangers lurking behind both the training schemes I have mentioned it he is clear in his mind about what constitutes a well balanced routine.

The Two Hands Snatch is considered by most authorities to be the most comprehensive of all lifting exercises and even regarded by some as a complete schedule in itself.

The man who likes variety, therefore, can accept the general principles of the “thousand and one exercises” creed provided that (a) he keeps to one particular routine for a sufficient length of time for it to produce results, and (b) that each new routine is well balanced on the basis outlined above.

The man who prefers simplicity can be quite sure that a minimum number of exercises will take him to the limit of his possibilities. But he, more than anybody else, must be quite sure that his chosen routine satisfies the training requirements typified by the Two Hands Snatch.