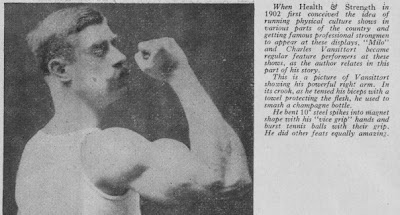 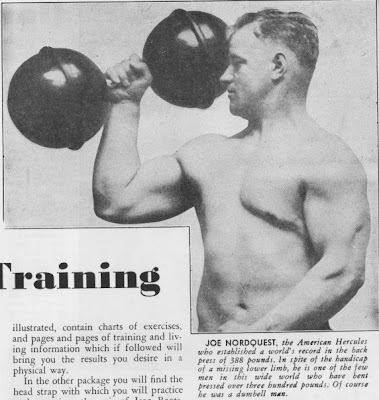 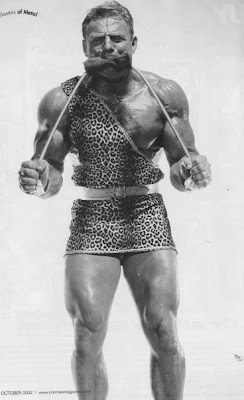 My Friendship with Arthur Saxon
by Thomas Inch

It was not long after my arrival in at the age of 21 that I met a world-renowned weightlifter who was fated to have a great influence upon my strength career, the late Arthur Saxon.

I lived in Fulham where the local music hall is a small but not unimportant one as the “Granville.” Visiting the hall one evening accompanied by my wife, I first saw the act of the famous Saxon Brothers – Arthur, Herman and Kurt. I immediately realized while watching the great Arthur that I was looking at a real strongman, one capable of feats which, at that time, no other man in the world could accomplish.

The feat of holding up a genuine 300 lb. barbell with two heavy men seated thereon and at the same time supporting upon the feet a long heavy plank with about a dozen men clutching each other for safety upon that insecure seat was most impressive, and everything was done with such ease and lack of effort I felt astounded. I made up my mind to make this superman’s acquaintance.

This I was shortly after enabled to do through the editor of a physical culture magazine commissioning me to visit the , Clapham, and take with me a scale with which to test Saxon’s claim that he was raising 300 lbs. overhead single handed twice nightly.

The Saxons had no inkling of my intended visit but I was pleased to find that they placed no obstacles whatever in my way; they seemed only too glad to believe that at last something was being done to establish their claims.

This was because at the time it was quite customary for so-called strongmen to outrageously exaggerate their lifts, one 10 stone (140 lb) lifter calmly claiming a Bent Press of 336 lbs. whilst the bell probably weighed only 140 lbs. or so.

I found everything in order, the thick handled bar being a little over the weight claimed. It was NEVER less than 300 lbs. all the time I knew this great lifter.

Once, indeed, at Battersea, the card read 286 lbs., but the bell, of course, was a good 300 as usual. Asked what this meant, Arthur, to my surprise, said, “We have lost the 300 lbs. card and they cost money, but we have a nice 286 lbs. card.” Such behavior had never been known in the lifting world before.

The Saxons believed in hard work and plenty of it.

Even when appearing twice a night with this laborious and trying set of feats of strength they practiced for two or three hours in the morning and seemed tireless.

Thus the Saxons had what others at that time lacked – the method of daily hard work which has got the champions of today where they are. But in this system they stood alone, others did as little as possible and the general standard of lifting was low at the time.

I am often asked about Saxon’s measurements and his best lifts. They were as follows:

Saxon’s muscles were tough, also his tendons and sinews, tuned over a period of years with really prodigious feats of strength. He was once a good wrestler but gave this up save for an occasional bout of Swiss wrestling (i.e., wearing a strong belt with leather rings). This style, which he taught me, required strength above all, and it suited him well and he was probably the best in the world at that particular style.

His best lift was, of course, the Bent Press, or a Two Hands Anyhow with Barbell and Ringweight, the barbell to be pressed single handed and not jerked and changed to one hand (the style which I introduced for the first time in my match with Aston). Arthur Saxon’s British record was 336 lbs. Bent Press and 411 lbs. Barbell and Ringweight. These were performed in strict conditions. He always seemed capable to me of doing substantially more but was never lucky when the attempts were made.

For instance, Peggy Bettinson. if the National Sporting Club, gave permission for Arthur to attempt to raise 350 lbs. Bent Press on the occasion of a big fight at the club when the late Lord Lonsdale was present. This was to settle a wager I made of £50 with a well known lifter.

Unfortunately the barbell was loaded to 353½ lbs. and perhaps this would not have mattered (the odd 3½ lbs.) but Arthur chose his stage barbell instead of a disc bell. It was loaded with sand and the globes were filled, they had no dead point as we say. Thus there was nothing in the very thick and perfectly straight bar to prevent it rolling in his hands and this it did each time it went to a straight arm, six times in all, so there was nothing left for me to do but to pay and look pleasant.

Arthur left the club in a fit of depression which was somewhat relieved when we reached my home where he was staying and I asked him to produce and inspect the leather bag which I had handed him in the club ring with suitable praise as a testimonial from his British supporters.

Arthur was always looking for justifiable stage by-play and had thought that there were a few silver coins in the bag for the sake of effect. When he opened the bag and poured out the contents – over £50 in golden sovereigns – it did much to make up for his big disappointment.

He tried again later but again was unlucky.

A claim was put forward that he had raised 370 lbs. when on the Continent but I am afraid that this lift was not checked properly and could hardly be accepted as a strict record.

At the same time, in spite of the fact that I had made a special 370 lbs. bell at his request and that he failed to press it, I would not put such a figure beyond him under good conditions with just that bit of luck which such a tremendous weight requires.

At one time the so-called friends of the Saxons claimed that he had, in the early hours of the morning, and after discarding all clothing until he was quite naked, raised over 400 lbs. bent press after commencing with a very much higher weight.

I can say now that Saxon himself never wished this claim to be made; he always gave me to understand that it was much exaggerated to say the least and in spite of threats from interested people as to what will happen if anyone dares to doubt this rather preposterous story I say that it was just nonsense and the actual weight of the early morning lift will never be known.

His feats were wonderful enough in all conscience without being stretched and Saxon was a most truthful man who never wished to receive credit save for actual feats.

He only showed me a 311 lbs. Two Hands Clean because he was not a fast lifter and there was a lot of “push” in his jerks.

I saw him do well over 280 lbs. Two Dumbells Clean and Jerk and when the bells came to the shoulder first attempt one slipped back to the side of the thigh, the left hand bell over 140 lbs. weight. Making a laughing remark Arthur calmly curled the bell back again and then half pushed and half jerked them.

The best Two Hands Press I saw was between 250 and 260 lbs., accomplished as if he had a lot in hand and let it be known that he did not bend back an inch or sway or move in any way, just forced the bell up with sheer power in a perfect “military” style of press as we then called that style of lift. He could have raised much more by leaning back.

I saw him Right Hand Swing 187 lbs. using a straight arm and a bell with discs evenly loaded (no back hang). This he did in the bent press position and with practice would probably have exceeded 200 lbs. I have seen him Snatch over 200 lbs. right hand in perfect style and it was his practice just before the curtain went up for his show to do a perfect Single-Handed Military Press with a barbell of 126 lbs. and the only reason he did not do more was because that was the only weight available.

He had two ringweights, solid, 150 lbs. each, the handles very close to the globes. He would swing one up and then stoop down and swing up the other. This 300 lb. lift he made the subject of an offer of either £50 or £100 and needless to say he never lost his money.

He was not a very big eater, he left that to the young brothers Herman and Kurt who were remarkable trenchermen. I could tell unbelievable stories of their gastronomic performances at my home which would be difficult to credit.

Arthur, however, was certainly a heavy drinker and once when a Fulham crowd at the Red Lion endeavored for a joke to get him drunk so that he could not go through with his show, he drank some 50 glasses of beer and had the last laugh as he never performed so well as that night at the “Granville.”

When he ascertained what had been intended he roared with laughter and told the plotters that he had been ‘weaned on beer.’

I trained with Arthur and the two boys at for the World Middleweight Championship, which I won at the German Gym defeating Billy Caswell. Using heavy weights to keep pace as far as I could with these champions, I made great strides modeling my Bent Press on Arthur’s style and my jerks on Herman and Kurt – who even then used the style of today, the special hold with the elbows high at shoulders and the fast split, etc. Their method was to start very low, with say a 100 lbs. bell, and work up until first one and then another dropped out leaving Arthur the champion every time. Of course, I was the first to cry “enough.”

Yes, I have much to thank Arthur for.

For his part he always credited me with being outstanding at feats of grip and never succeeded in lifting my challenge dumbell or closing my record gripper. It was this knowledge, during 15 years of practice together, that made me so confident that I would never lose my money. And if a champion with lifting brains like Arthur never found anything in the way of trickery or ‘secrets’ in my solid thick handled bell I think that is sufficient answer to the charge in a physical culture magazine that Inch knows a secret without which no one can lift the £200 challenge bell. The secret was a 15-inch forearm, unusually developed will power and constant practice.

Arthur seemed to have an objection to going to bed at a reasonable hour and often sat up right through the night smoking, playing billiards, even lifting at three or four in the morning. Of course, it is evident that we never saw the best of him and that, properly trained as we understand it today, he could have done very much more than he ever did. He was never extended and to this day his Bent Press and Two Hands Anyhow are unbeaten.

At the height of his career Saxon met with a serious accident. Through no fault of his own a heavy wooden bridge loaded with a large motor car and a number of people fell on him whilst he was supporting it. He was in hospital a long time, iron bolts having been driven in at several places.

He recovered but died at about 43 years of age from pneumonia.