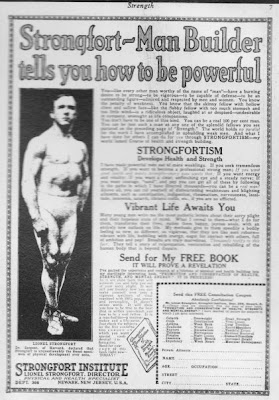 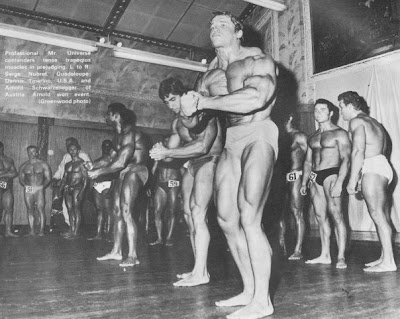 During the years of 1920, ’21 and ’22, very lean years in my life, I still managed to procure in some manner most of the courses which were being offered in the physical training magazines of those days. I have complete sets of such magazines as Strength, Correct Eating and Strength, Arena and Strength and Physical Culture, Bernarr McFadden’s magazine. I have every copy of the McFadden Muscle Builder which was published from 1922 through to 1925. I have bound copies of the Strong Man and a great many copies of Sandow’s magazine and the British Health and Strength.
Our own magazine, Strength & Health had its beginning in 1932. We purchased the rights to Strength which had its inception at the beginning of the century and at one time I had every copy of this magazine. I have the first copies of Sandow’s magazine which started in 1898, the year I was born. I have the first copies of Physical Culture and the first copies of Muscle Builder. Let us see who was advertising in those golden days.

The young, slender Bob Hoffman was reading these advertisements trying to learn how to build strength and muscle. There was a double page spread of Lionel Strongfort, who died at the age of 92. A few weeks before his death he wrote to me and asked if I would like to offer his course for sale. It was still a good course and he believed that I would do well with it. It was called Strongfortism, The New Science of Health Promotion. He said nothing about apparatus.

Another advertisement was by Bernarr McFadden. He offered to add 15 years to your life.

Charles MacMahon, who apparently was with the staff of Strength magazine, had a course of his own and a full page ad. He offered to help you get muscles like the fellows in the photos – Grimbach, Simms, Rotan and Geiser. MacMahon, whom I came to know well, was one of the three in the famous barbell ad. The others were Matysek and Tauscher. MacMahon had another full page ad for his wrestling book.

George F. Jowett had an ad. Although he was one of the strongest of men, a good wrestler, tumbler and hand balancer, he offered a pair of 15-pound dumbells and showed some really outstanding men who had taken his course.

There was a Milo Barbell ad showing Owen Carr. There was a Eugen Sandow ad.

There were five full pages concerning the Earle Liederman course. At time he had 12 full pages and he was the leader in the train-by-mail field. He had two Rolls-Royces and a Hispano-Suiza. His usual advertisement asked, “How would you like to walk up Broadway with Earle Liederman?” He was offering an elastic rubber exerciser. Earle is still with us and writes for Muscular Development and Strength & Health (1970).

In those old magazines there would be a full page ad by Hobart Bradstreet offering a spine motion course of training. Jimmy DeForest offered a 20-week boxing course with the heading, “Wanted by 10,000 fight promoters, men who can box.”

Siegmund Brietbart had a full page advertisement concerning the offer of “Brietbart, the Superman of Strength.” His book was called Muscular Power and after a few weeks of free hand exercises he offered a spring made with a number of layers of steel having the same action as our crusher grips of today. I had his course and his springs, and liked them but it would do little more than build good pectoral muscles. Years later while driving a spike through a board, it slipped and entered his flesh. He died of blood poisoning.

Michael McFadden (no relation to Bernarr) had a 2/3 of a page ad in the old Strength magazine. His advertisement was headed with the line, “You too can have muscles bulging with power.” His medium of power and muscle building was a cable exerciser which he said was manufactured and sold under patents awarded and pending in all countries. Infringers would be punished by law! (cables were used 50 years before in .)

The Weil Company offered a rubber belt that looked strangely like our “heat belt” of today. They advertised, “New self-massaging belt makes you look many pounds lighter and inches thinner the moment you put it on. Actual fat disappears as quickly and as surely as though under the hands of an expert masseur. No dieting, no drugs, no exercise. A wonderful new invention that not only gives you an instant appearance of slimness but actually reduces your bulging waistline to normal in an amazingly short time is now being used by thousands of men who were formerly overburdened with an excess of fat. With this remarkable discovery it is no longer necessary to resort to heart straining exercises or weakening diets and few men can take the time or pay the exorbitant fees charged by a professional masseur. As everyone knows, the masseur, by skillfully manipulating the loggy tissues right at the spot sets up a vigorous circulation that seems to melt the fat away.”

The Weil Scientific Reducing Belt operated on the same principle. Made of specially prepared rubber it not only reduced your waistline from four to six inches the minute you put it on but it was so constructed that every movement you make, every breath you take, imparts a constant, gentle massage to your abdomen. it massages away the abdominal fat so quickly and easily that it seems almost like magic. In a few weeks inches and inches of fat should actually disappear.

The ad said, “Thousands of men who were formerly burdened with bulky, disfiguring fat, have not only vastly improved their appearance at once with the Weil Reducing Belt but have quickly acquired a normal waistline.”

Free proof – Try the Weil Reducing Belt at our expense for ten days. Take your waist measurement before and after this ten day period. Note the difference in inches. Feel the improvement in your general condition. According to the terms of our guarantee you must be satisfied or you pay nothing.”

The price in 1924 was $9.95, which was a great deal more money than it is now. The Weil Company’s advertisements appeared in the next ten years of Strength magazine. I do not know what happened to them after that.

The Weil Company had competition, competition that would now get the advertiser into considerable trouble. Another company, the Sanden Belt Company advertised their belt as a source of strength and vigor. They advertised, “If you seek that perfect health, strength and vigor which makes men also powerful and magnetic, or if you want to get rid of rheumatism, nerve weakness, lame back, lumbago, poor circulation, dyspepsia, sleeplessness, kidney, liver, bladder weakness or other distressing chronic complaints, then send right away for out free booklet telling you about the famous Sanden Belt. This is your opportunity to become well, strong and capable without the use of drugs. The Sanden Hercules is the best in the world and has thousands of satisfied users. Sold by the Herculex Company, .”

These advertisements would make you wonder just how good these belts really were. The Weil Belt somewhat resembles the BH Waistband, more often called a “heat belt.” Although some strong statements are made considering the performance of these belts in the past they could not operate as well and the BH Waistband for it is made of an entirely new rubber-like material which generates a fantastic amount of heat.

We receive fabulous reports concerning the services these belts render and these reports verge on the incredible. Not surprising to us, however, for many years I have stated that heat, massage and exercise are the best ways to avoid athletic injuries and to overcome injuries which have occurred.

I was talking to S & H editor Bill Starr and Tommy Suggs and they both agreed were it not for the BH Waistbands and BH Kneebands, they would not be lifting today! Both had knee and sacroiliac injuries which put them out of weightlifting until the BH bands brought them back into the game.

Tommy Kono tells us the same thing. If he had knee bands sooner he would not have had to give up weightlifting and turn professional. A report I received recently from an enthusiastic user of BH Waistbands and Kneebands stated that it was the greatest invention since the revolving barbell. It is a piece of equipment that well-dressed weightlifter and athlete should wear and serves well for Mr. and Mrs. Average American.