My First Quarter-Century In The Iron Game - Siegmund Klein 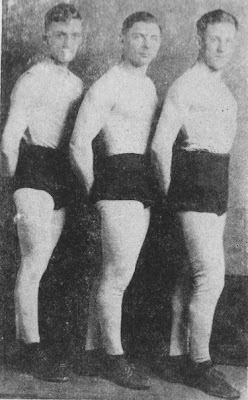 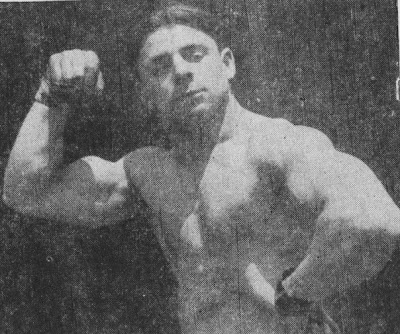 Unlike many Physical Culture Teachers, I am proud to say that I have always been a healthy child and realized at a tender age that I was considerably stronger than my friends. I would delight in testing my strength. At school I partook of the exercises with great delight, and was usually chosen at act as leader in the various sports.

My father was gifted with more than usual strength, and I would like nothing better than to listen to some of the stories he would relate to me. On many occasions, he would lift a 112 pound ring-weight with his little finger from the floor, and place it upon an ordinary table, then return it to the floor again.

I would, oh, on so many occasions, watch my father washing, with his sleeves rolled up, or without his shirt on, and never tire of watching his muscular arms moving during this period. Then I would go through the same movements, in front of my mirror, but in vain; my muscles did not look the same. My age at this time was about twelve. Even at so tender an age, I was “muscle-conscious.” I did want to get muscular and strong.

One day, while a carpenter was fixing our windows, new cords and window pulleys had to be installed. I kept my eyes on the old ones and wondered if the carpenter was going to take the pulley weights along with him. Much to my delight he left them, and these were my first set of iron “dumb-bells.”

I trained with these weights, going through the various movements I had learned at school with wooden dumbells. My enthusiasm could not be kept secret and soon some of my friends were invited to exercise with me in my “little gymnasium.”

Up to this time I did not know that Physical Culture books or magazines were published.

At school our physical training teacher took delight in teaching some of the more enthusiastic boys tumbling. Soon a trio – Mike Ritter, Yale Sharp and myself – was formed and we would give tumbling exhibitions at school displays and field days. We would attend the vaudeville houses in , and would usually see some “hand-balancing” or tumbling acts, then go back to our school gymnasium which was at , and try to do some of the more advanced stunts. I being the strongest of the trio would be the “bottom man” or supporter of the other two athletes, when such stunts required it. I was getting stronger and it was not long before I was able to lift Mike, the lightest member, overhead with two arms.

As enthusiastic as I was about hand-balancing and tumbling, I felt that this was not exactly what I wanted. My “dumb-bells,” which I kept exercising with, were getting much too light for me. I did not know of heavier weights at this time.

Our trio attended in , but would go back to for our practice periods.

At East Tech I was always happiest when gym period was at hand. Professor Kern, our gym instructor, was indeed a very good teacher.

Fate, however, had other plans for me at this time. My older brother who had a bake shop could not get sufficient help, so after school I would work in the bake shop until late in the evening as well as all day Saturdays and Sundays. This of course put an end to my attending the Prof. Kern “after school” gym class. My father thought that this would be the best for me. He wanted to send me to a baker’s college after completing high school.

While working for my brother, many opportunities presented themselves to “show off” my strength. When for instance supplies would be delivered to the bakery, I would, to the delight of the truck drivers, help them. I would take two jelly pails that weighed thirty-five pounds, “muscle-out” one of them, and walk into the shop. Or lift a sack of flour that weighed one hundred and forty pounds overhead with two hands.

It was about this time that a friend of mine, who knew my interest in strength, showed me a “Physical Culture” magazine. I was all eyes. I hoped that the magazine would have been published more than once per month. Each month exercises would be illustrated, and I would practice them faithfully. Tommy Faber posed for many of these illustrations, and little di I know at the time that Mr. Faber, who was, as I learned later, a professional hand-balancer, never obtained the shapely figure he had from practicing those particular exercises. From time to time Charles Atlas, Earle Liederman, William Waring and other well known athletes posed for these articles.

In the pages of “Physical Culture” magazine advertisements appeared such well known Physical Culture Teachers as Lionel Strongfort, Adrian P. Schmidt, “Prof.” W. H. Titus, Earle E. Liederman and Anthony Barker. Each of these advertisements showed a picture of the teacher and some featured one or several pupils. Most of them mentioned that for as little as ten cents (some gratis) they would mail you their booklets and therein describe what they had to offer you in detail.

I at once sent for the booklets. This was done without my parents’ knowledge, and when the booklets started to arrive, I was of course questioned about this, and my father was a bit perturbed, telling me that I was “strong enough” without taking any such courses. This was, as you shall read, only the beginning of trouble with me.

To take a “course” I was determined. Reading and re-reading the booklets, I could not make up my mind which course to purchase. Some o the teachers kept their system a secret until purchases, others would show pictures of the apparatus that was sold, with glowing terms of praise and informing you that if you followed this particular course you too could get the development shown. In fact, you could become a Sandow.

Up to this time I did not know or hear much of Sandow, save that he was reputed to be the “Strongest Man in the World.” I did see a picture of Sandow on a “strength testing machine.” It was his famous column pose.

Though this “machine” with Sandow’s picture was quite a distance from our home, I would, whenever the opportunity presented itself, go there.

This pose was to me, the greatest, most magnificent display of sheer muscular beauty that I have ever seen. Sandow’s well-shaped head, his handsome face, powerful and muscular arm, his well-molded torso, his capable looking legs – all inspired me to greater heights. Here, I thought, was the athlete that I would pattern myself after.

Knowing that Sandow was a weightlifter, and if Sandow obtained such a fine development by using weights, then I too wanted to train with weights.

None of the booklets I read advocated barbell training.

In 1919, an advertisement appeared in “Physical Culture” magazine that attracted my attention. Some pictures of a “Muscular Marvel,” Edward Goodman of , graced the page on which appeared a notice that subscriptions were being accepted for a little magazine called “STRENGTH,” and that this magazine was being published again, having discontinued publication during the World War.

After what seemed ages to me, the magazine finally arrived. I could hardly wait to get it out of the envelope. I read and re-read every page of that little issue of STRENGTH. Here, for once, barbells were being advocated for exercise!

A few days later a catalog arrived with illustrations of the various types of barbells that the Milo Barbell Company of sold. Inside were photographs of strongmen showing their fine development, and testimonials by these athletes mentioning that through the use of barbells they obtained their strength and development.

This was exactly what I had been looking for. The urge to send for the barbells was only dampened by what my folks would say or do if I purchased them, and had them shipped to our home. I did not dare ask for permission, knowing full well what the family thought about my training.

With determination, off to the post office to mail my money order. Together with the information sheet all filled out, I sent for a One Hundred Pound Barbell Set, and instructed the company to ship the weights by freight (so that I would call for the weights at the freight station). Though I was never aware hat it would take considerably longer than by express, it was nevertheless the wiser method.

Being seventeen years of age at this time, another discouraging thought occurred to me. Would this company accept my order without the consent of my parents?

A few days later a letter arrived confirming the order and that my set of barbells would be shipped as requested in a few days . . .