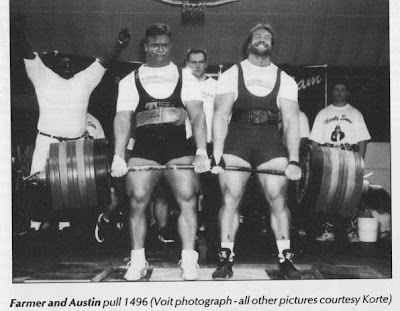 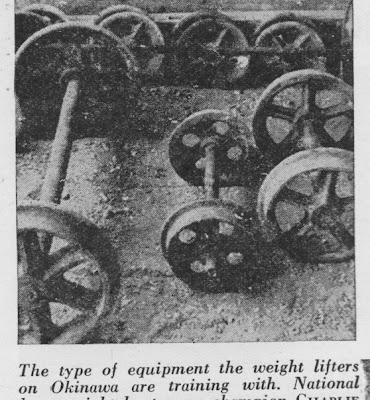 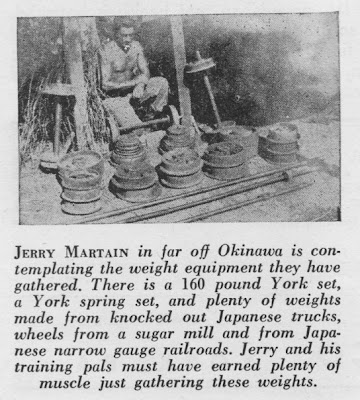 The Bob Peoples I Knew
by Bob Hise II
Some lifters have bulging biceps, some have massive chests. Bob Peoples had robust rhomboids, a spinal column encased with spinal erectors the size of forearms; a back highly developed from the head bone to the tail bone, atlas to coccyx, with ligaments and tendons that could be equated to steel cables.
In the 1940s he deadlifted 728 lbs. weighing 178, minus drugs, wraps and body suits. This was done using a cross hand (knuckles out) grip. He wore no shoes (only socks) and was the forerunner of ballet-type deadlift shoes.

In 1937 the Tennessee State Olympic Weightlifting Championships were held at the Frye Institute (a for the Iron fraternity) in . Bob Peoples, an unknown lifter from the eastern part of the state was entered. If memory serves me right he did a 190 press, 215 snatch and a clean & jerk of 265. He used a powerful pull and shallow split in snatching and cleaning which denoted tremendous back strength. When the competition was over he asked to put on a deadlift exhibition. With no warmup he opened with 500 which he did for 4 reps. Bob went on to do 600 and 650 with much to spare at a bodyweight of 175. The most unusual part of his lifting was the way he gripped the bar, a straight no-cross grip and a steady, no pause lift from the floor to a strong stand up finish. We became friends from then and continued until the end when I served as a pall bearer at his funeral.


Many were the times that we visited in each others homes and discussed lifting. His many innovative training philosophies, routines and inventions guided him as he became the world’s greatest deadlifter. His early training was done with crude objects. Two barrels with a heavy pipe attached, large timbers were placed in the ground and were used for supports of this huge apparatus. The barrels were filled with rocks, each having the weight painted on them. This was one of Bob’s first training devices.
Sinking Creek ran in front of the Peoples’ home, and a suspension footbridge skirted the creek. Bob would load up his barrels, take them off the racks and walk across the swaying bridge, turn around, walk back across and place the weight on the supports. I’ve seen him use 500 lbs. for this feat. He called it building ‘super-strength’.


For deadlifting he would place the barrels on the ground and use different height platforms to stand on – which gave him different lifting positions with bar touching insteps, to medium, and a high finish position.


The only conventional pieces of equipment he owned at that time were a 150 lb. standard plate-loaded barbell and two solid dumbells (one 60 lbs. and one 75 lbs.). He would do one-arm swings, presses, and snatches with dumbells. Of course, Bob later acquired conventional equipment – a Jackson Olympic 400 lb. set. He had the local foundry cast four 100 lb. weights to use in his various exercises.

Peoples was much in demand for deadlifting performances and I accompanied him to , , and other areas. Many times we would have to take extra weights because the sponsors would not have adequate barbell plates. One of these times was an event at the Nashville YMCA, an Olympic lifting contest, plus an exhibition by Pudgy Stockton and Bob’s deadlifting. I had recently been discharged from World War II days in the Army Air Force and had an Army Jeep. Highway 41 was being worked on and we had to detour over the mountains via (home of famed western film star Tom Mix). Logging and mining trucks had left the road in horrible condition and driving at a reasonable speed carried you all over the road. With weights in back and makeshift bed on top where my wife Billy was sleeping and Bob in front with me shivering, we made the lurching journey as fast as possible so Bob could get back to work. I asked Bob to drive ad get warmed up – his reply, in his usual dry wit, “No, I might get the Jeep in jump gear and we’d really have a disaster.”

Bob, along with Pudgy, stole the show. He lifted 728 weighing 178. No wraps, wearing only socks on his feet. To quote Bob, “It gave me better leverage.” He used his underhand grip here because it is the natural way to lift. Ask any beginner to lift a barbell and they’ll start in this manner. He used both styles of gripping but always thought this was the best way to lift heavy weights.

Bob was always cold and when I walked him to the passenger boarding train platform his knees were actually bouncing together from the extreme shivering. He had to catch the Southern Railway train “The Tennessean” and get back to for work that afternoon.

This reminds me of when Bob and his wife Juanita visited us in (which as you know is not a cold area). Bob asked me if I’d turn on the forced air furnace so I adjusted the temperature to a good warm setting and opened the vent wide in their bedroom. For the first time ever the thermostat malfunctioned and the burners cut off – blowing cold air into their room. Bob never believed this wasn’t intentional.


Some of Bob’s training methods were unique. He built a bouncing platform of two oak 2x12” boards, 8’ long, nailed barbell width apart on 4x4” timbers underneath at each end. By using the lift on his tractor (extending a lowering/raising mechanism which he could operate by placing his head against the actuator) 800 lbs. would be lifted to an upright extended position, and he would lower this, with a bounce, and attempt to get the bar to his knees. This would build great starting strength (50 kg. Mav-Rik bumpers can be used for this type of training). Bob also did a lot of eccentric movements by using his tractor lift to raise an excessive weight and then lowering it himself.


I witnessed him doing cleans with two 110 lb. dumbells for ten reps, one from the floor and 9 dead hangs. He used no straps which showed his great gripping and tremendous back strength. His theory: you start most every lift with the hands so they must be strong. I think many power and Olympic lifters neglect grip strength training.


I’ve never known a man who did so much: worked in a rayon mill (changing shifts every week), a member of the Johnson County Road Commission, farmed, and still trained, and I mean HARD TRAINING – many times at 2 a.m. after he finished his evening shift of work and had a bite to eat.
Bob bought another farm with a huge house sitting on a hill. Here he built his basement dungeon gym. Not only did he train here, but he trained Paul Anderson as well. Peoples was really an organized man.
He was a mild man, but did have a flare up temper at times. His wife Juanita told me of times he would get so angry with himself because he wasn’t progressing that he would actually carry his weights from the dungeon and throw them down the hill – swearing never to lift again. A few days later he would lug all the weights up and back to the dungeon and train harder than ever. A real layoff.

Yes, Bob Peoples was ahead of his time. His photo is enshrined in the Tri-City: , denoting his position in the Tennessee Athletic Hall of Fame. He was a graduate of the and won honors as a livestock judge.

Yes, Mr. Peoples was a great lifter, a fine gentleman, and a true friend whom I miss very much.