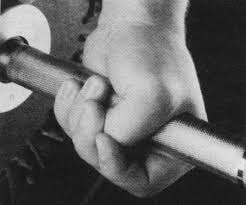 In media coverage of weightlifting competition, rarely is there a mention of the function of the hands during the course of the lifts. Much emphasis has been placed upon the tremendous leg, hip and back, and shoulder strength of weightlifters from Tommy Kono to Naum Shalamanov. The recognition of grip strength as a necessary part of success in lifting has been severely neglected. What good is all that power if the means by which it is attached to the barbell is overlooked? The snatch, for example, requires exceptional grip strength since the hands are placed at such an angle that optimal gripping efficiency is compromised.

In order to improve gripping efficiency, weightlifters developed the hook grip. This is performed by clinching the index and middle fingers tightly over the thumb which is bent under the opposite side of the bar. It is not unusual to find the smaller lifters growing the thumbnail out to improve the leverage of the middle finger in this grip. The use of the hook grip is especially beneficial in all pulling movements and is universally taught by weightlifting coaches around the world. Initial attempts at using this grip usually result in painful thumbs, but the serious athlete will persevere until it is mastered.

Many weightlifters are not aware of when to abandon the hook grip. It is a double-edged sword since it requires a tight clinching of the hand which is ideal for gripping, but inhibits the hand from making rapid movements.

Boxers and athletes in other punching type sports are aware that tightly clenched fists inhibit hand speed. Therefore, they do not form a fist until immediately before the expected point of contact. Weightlifters need to realize that while the hook grip is advantageous during the pulling phase of a snatch or clean, it is inhibitory during the lockout of the snatch and the racking of a clean. This is due to the accompanying tight contraction of the wrist flexors.

To correct this problem, weightlifters must learn to “pop” the thumb out once the pulling phase of the snatch is completed and the “push under” portion of the lift commences. This will result in a more rapid descent under the bar. In the clean, the release of the thumbs must take place in order to facilitate a rapid forward racking of the elbows. For man lifters, the release of the thumbs during the clean is not a problem since they are incapable of racking while maintaining a hook, but in the snatch, a conscious effort must take place to change from the hook to a more relaxed grip.

In some very extreme cases, I have observed lifters maintaining the hook grip not only through the racking of the clean, but also into the jerk portion of the lift. This will inhibit a speedy upward arm drive and lockout of the bar overhead. In the majority of cases involving my own athletes, I encourage them to actually relax their grip upon the bar during the jerk phase in order to facilitate a snappy arm movement.

If we are to look at weightlifting (and indeed athletics) from a neurological standpoint, we can differentiate it from bodybuilding and powerlifting in its necessity to utilize both neurotransmission and neuroinhibition, that is, contraction and relaxation. During a snatch or clean and jerk, numerous muscular contractions take place, but just as importantly, many muscles are required to relax in order to allow their antagonists to function at maximum speed.

The much maligned term, “muscle-bound” is actually a description of a condition in which the athlete is incapable of relaxing the antagonistic muscles during the performance of a given movement. This principle holds true for the muscles of the forearm as much as it does for the prime movers of the legs and hips which are frequently cited for their roles in the success of the weightlifter.

n order for the athlete to correctly learn to release the hook grip, some help from a coach or a training partner will be needed. This particular movement will not require a sophisticated coaching eye, but rather a monitoring as to whether or not the hook has actually been released. Once mastered, the results should be snappier pushes under the bar and rapid racking during the clean.