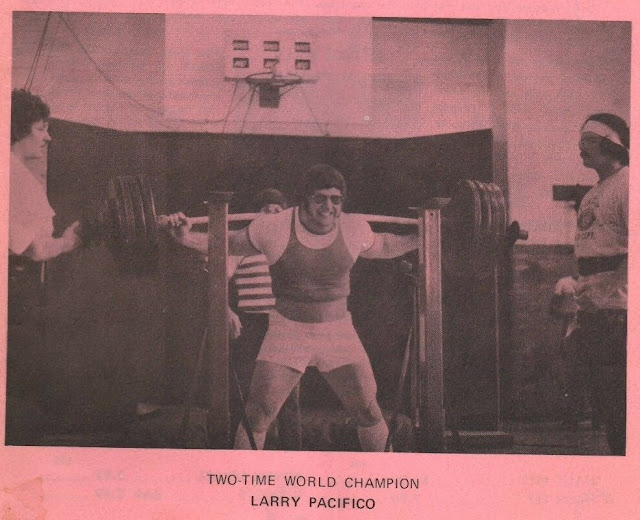 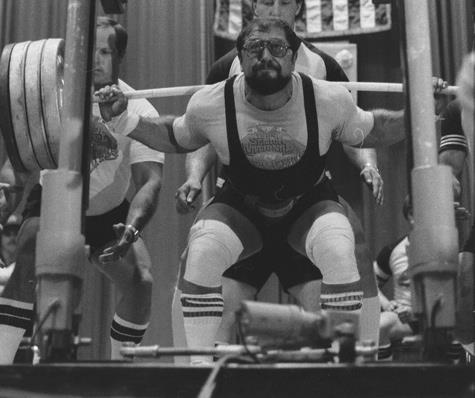 This is the second of three parts of my reminiscing the years 1965 through 1975. Without hurting anyone's feelings, I hope, I'll try to describe people I met as I saw them.

Received many calls and more letter on the first part of my article. Most were happy with it, and wanted me to mention people like Don Blue and Russ Fletcher. I know very little about these people. We have met, but I never has any real personal contact. I do know, as most of you do, that they were great lifters.

Don was not as good a burglar as he was a lifter, however. To my knowledge he is back in prison again.

Carl Snitkin won the 242s that year. Carl was riding high in the late '60s and was always a threat at 198 and 242. After '71 his lifting didn't seem to improve. We lifted at many of the same meets and got to be friendly. I always thought he could do better with proper training, but we never really talked much about sets and reps. Now all of a sudden this man is right back on top! I don't know what happened, but it's great to see it. He's a real competitor, and will have a shot at winning in Dayton.

Sometimes a lifter will go on for years lifting with average success, then all of a sudden they blow the power world's mind. I have found this to happen several times for usually the same reason: "Love" - It's true. I've know many a lifter who improved when they met that special person. On the other hand, I've seen them plunge if a problem occurs. Frame of mind is important to a lifter. How can one concentrate if there is depression and/or rejection from the one you care about? A job can be as much a factor for improving or declining, too. I know, however, if you find someone who cares about your lifting as much as you do and encourages you and pushes you, then count on much improvement.

A couple of people come to mind on this subject. Walter and Julie Thomas. Both very good lifters before they met, but look at them now. I've always said this at my seminars; that Walter Thomas may bell be the strongest man ever. He just needed something to click. Well, I think it was Julie . . . she will be World Champion in England for sure. I could make several more examples, but most of you know what I'm talking about.

Because of many business duties and health reasons, I've dropped out of the chairman's race. Also, after seeing what the job requires, I'm not sure any one man can handle it. I thought Joe Zarella did a great job. He had endless energy and no one loved the sport more. 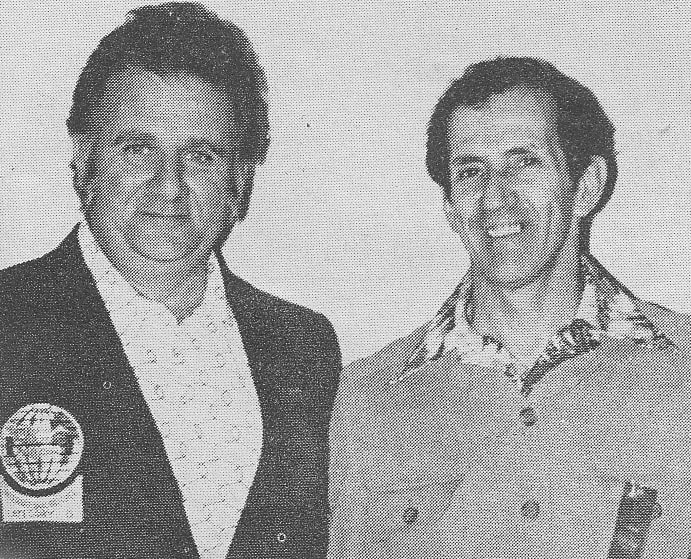 
There are several good people running for the chair, but I'm not endorsing any of them as I think they all are capable. I do want to point out that we're paying $500 a month now to the acting chairman when Joe did it all at his own expense. Keep that in mind before you judge Joe Zarella. His business and health deteriorated while in office. Seems no matter what he tried to do, half the people were for him and half against. Many of the problems came from TV contracts. Joe and Terry Todd put together a good deal with NBC at the start, but when CBS got involved this caused many changes that affected Joe. I think we should have stayed with NBC to begin with. They took a chance with us in 1977 in Australia, then we shut the door on them. Enough said.


Speaking of Terry Todd. A lot has been said and written and many rumors were flying around about him. Let me start from the beginning. I met Terry at the Chattanooga Open in 1974. Jan was there as well and we became good friends from the start. Over the years Terry had much to do with my success. He encouraged me on many occasions and talked me out of retiring in 1975. We traveled all over the world together and did several seminars in the States. He was the main force behind the success of powerlifting throughout the world. He, alone, negotiated and got us television. He did the book Inside Powerlifting.

He got us in Sports Illustrated. He not only helped me, but others. Kazmaier for one. He took Bill under his wing. Brought Bill to Auburn, got him on the team in 1979 after he bombed out at the Seniors. Bill went on to win the Worlds Strongest Man contest. He got Bill into the Highland Games in Scotland. He negotiated and got Bill the Bell Telephone commercial. He got Bill into Diversified Products which led to Bill opening his gym in Auburn.

Now, I've had my differences with Terry Todd, but I would never publicly badmouth him. Our problems were more personal than professional. He's done too much for me and powerlifting for me to say or do anything to hurt him. Certain people should be careful of who they step on on the way up because they may meet them again on the way down.

I was talking about NBC and did some work for them in the past. They sent me to Tokyo, England, and several places in the States for different lifting events. I enjoyed the work but never thought I did very well. I tend to stutter a bit . . . especially when 20 million people may be watching. Anyway, they called me just before the 1981 Women's Nationals and asked how to get in touch with Pam Meister. Although I would have liked to have had the job, I think this was a great move for NBC. Pam made women's powerlifting records acceptable to the public. When she lifted, she was cute, exciting and very photogenic. 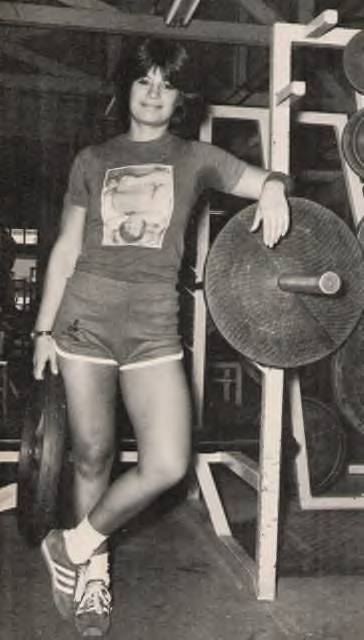 Her next move could easily be in the movies. I'm not kidding. I knew Pam when she lived in Canton, Ohio. She was a very strong 105 lifter but lost to Terry Dillard in her first Nationals. However, she later won that class when Terry bulked up to 114. [It's not really, but it sounds weird. Bulked up to 114.). In 1979 Pam moved to Santa Monica to train at Golds. There she met Dave Keaggy and he rounded her into shape to win the best lifter award at the Women's Nationals. Pam is now retired from powerlifting and lives in Florida where she is bodybuilding. I hear she will doing the women's classic in Vegas for NBC. Currently she is doing color on NBC for the World's Strongest Man Contest.

I mentioned Terry Dillard earlier. She is another who adds class and style to women's powerlifting. Educated and beautiful, Terry chose lifting over other things. She cares more about her training than most women I've met. She, for a time, would drive from Ames to Des Moines twice a week to have proper training facilities. Never having lost before, Terry is on her way to winning yet another world title in England in May.

Adding one more note on women lifters. In 1980 at the Worlds for Women in Hew Hampshire, I met a person I won't soon forget. I remember I arrived late and walked into the Holiday Inn lounge and joined several friends who were about three beers ahead of me. It's Rude to Stare!

At that time I had never met Bev Francis, nor had I ever seen a picture. All I knew was that she could bench 300. Anyway, she was soon pointed out to me. Well, I was a bit taken aback I must admit, and of course, was convinced that I was being put on. Within just a few minutes word got to Bev that I was there and she turned around and looked at me a moment. I continued to look at her in disbelief as now I could see her frontally. She was the most muscular, hard looking female I've ever seen. 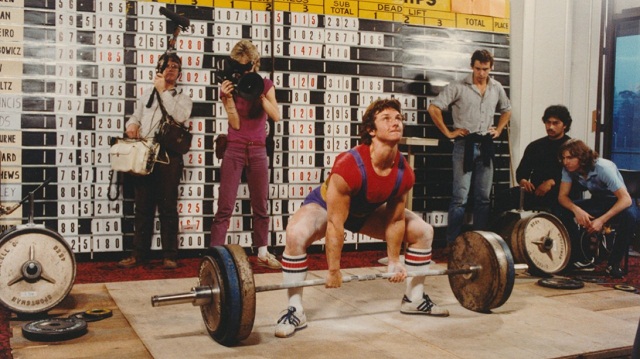 She had short hair and a square jaw. She soon smiled and said, "Well, well, the great Larry Pacifico." I replied in a similar manner but I bounced my pecs for what reason I don't know.

She then proceeded to turn completely around and said, "That was pretty good, Larry, but watch this." Well now . . . I thought I had seen it all, but how wrong I was. She bounced her pecs in an alternating fashion that left me and my friends with our jaws hanging open.

She then challenged me to arm wrestle, which I declined as I put my jacket on and slipped quietly out of there to my room.

The two best trips I took were Perth, Australia and Turku, Finland. In Australia I had a great time because I was not injured going into the meet. Plus, we had a day layover in Hawaii. What a time! Terry McCormick always impressed me. He made both trips. In Perth he was hurt but in Finland he was well and was World champ. Terry was always a gentleman until the platform. He made several friends in Perth and I know he was hurting but remained up and supportive to his team members.

I roomed with Doug Young in Perth and I'll go into more detail on that in the third part. A year later in Turku, McCormick went head to head with Hannu Saarelainen.

Hannu is a unique, hard looking Viking. A man who likes his liquor and lifting, both of which he could handle a lot of. Always taking second, it seemed, but always improving. He was his strongest in Turku, Finland being his homeland. But Terry, I think, hit 8 for 9 (as he does so often), and easily won.

But in the bar later Hannu took on all challengers. When I arrived at the party, he pulled me over to his table and insisted that I drink. He handed me a bottle of Tequila. "Drink, Larry, Drink."

Being the social one, I took a swig.

The next thing I remember was landing in New York. I swear I don't remember getting on that plane. Hannu is a guy you don't say no to. He will be world champion I think,some day. Very little is known about him, but he is a very wealthy business man, and we have been friends for years. 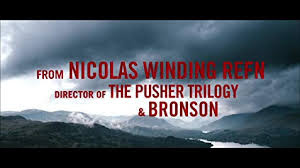 George Zangas passed away in October of 2011. He had a heart attack while benching in his garage. They found him with the weight still on his chest. For more on his training approach, go here:
https://johnwelbourn.powerathletehq.com/2012/01/18/coffee-guns/

George has good platform sense. If you will notice some of the guys he helps go 9 for 9 often. McCormick, Grudzien, etc. George is a good lifter himself, but chooses to develop his team and sponsor lifters and powerlifting itself.

I make frequent trips to L.A. and George always makes me feel comfortable. My best memories are going to a Greek restaurant called Papadakis. It has to be the best in California. George has a beautiful home and a fantastic family and they always treat me warmly. I will visit L.A. again in June and discuss new things for the powerlifting world that sound exciting.