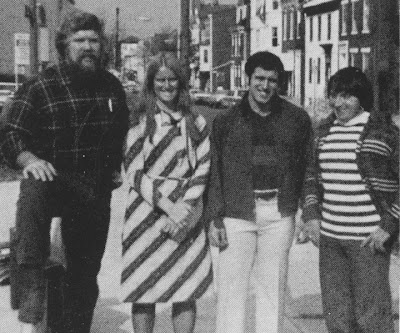 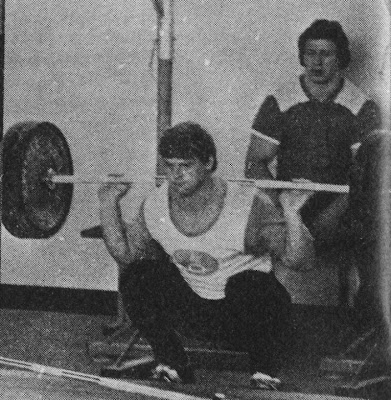 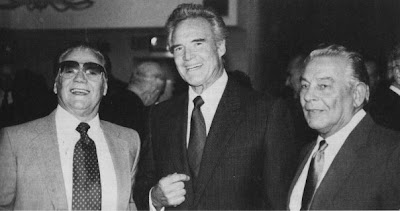 
To be honest, I’m getting more than a little bit sick of Ron Collins. Seems to me that a man a man with any decency at all would realize how he makes the rest of us retirees feel as he goes into his 43rd year stronger than ever and winning his fifth world championship with a new world record total. Has he no sympathy for those of us who have to suffer through dozens of conversations such as the following:

“Hey there, aren’t you Terry Todd?”
“That’s me all right.”
“Wow, I’ve read your articles. Are you here to cover the World Championships?”
“Yes, I’m here for that and to visit with some of my buddies.”
“What about Ron Collins last night?”
“Too much. He’s too much.”
“I’ll say. And to think he’s 42 years old.”
“Yeah, it’s amazing, I’ll admit.”
“How old are you, Dr. Todd?”
“Almost as old as Jack Benny.”
“Late thirties, huh?’
“Thereabouts.”
“Do you still compete?”
“No. No, I haven’t competed for ten years.”
“Well, after seeing Collins lift, why not?”
“Look, you’ll have to excuse me; someone’s calling me from the other side of the auditorium. Nice talking to you.”

After all, why can’t he just lie back like the rest of us, do a little light training, get together with other oldtimers at the big meets and lie about how much he lifted in contests past like we do, and just sort of take it easy? Instead, it looks like he’s going to keep on making it hot for us ex-heroes for quite a while yet, as he plans to continue competing as long as he can continue making gains. I guess all of us other senior citizens of powerlifting will just have to learn to put up with him.

Being really honest, everyone in lifting, ESPECIALLY those of us who’ve racked it up, love and respect Ron Collins, for in him we see, or like to see, what we could all be if we only had the will and the passion to live as Dylan Thomas urged.

“Do not go gentle into that good night / But rage, rage against the dying of the Light.” Which is how, just how Ron Collins lives and how he lifts.

How did he begin, this man whom age does not wither? In a long talk we had in York following his most recent world title, he told me that at the age of 28, and at a bodyweight of 145 pounds, he began to train with weights to increase his ability in soccer. Always naturally strong, he enjoyed training immensely, and, after a year he jilted soccer, for twenty years the love of his life, and fell heavily into the arms of the Iron Maiden, where he’s been ever since.

By 1962 he was already strong enough to qualify and win the British National Strength Set Championship (Squat, Bench Press, Curl), but he was busy with his job and did not enter. By 1966 the curl had been replaced by the deadlift and Ron was ready to enter, and win, his first National Championship. Since that time, ten more National Championships have been held and Ron has won every one of them, creating dozens of world records in the process.

What routine could produce such regular, amazing, relatively injury-free progress? In our talk, he described his favorite routine, along with the maximum poundages he used prior to the 1976 World’s.

Wrist Curl – light weight and high reps, rolling the weight down into the fingers.

The same as Monday except that he works up to a 5-rep limit in each of the three lifts rather than for triples or singles. His bests for five reps are: Squat, 680; Bench Press, 390; Deadlift, 650.


Ron follows more or les this same routine for six weeks prior to the World Championships in early November, after which he takes a complete layoff from all exercise until January, when he will begin with light bodybuilding. From this, he gradually increases the poundages and narrows his focus so that finally the three powerlifts once again dominate his schedule. His weight has never exceeded 189 and he likes to keep it no higher than five pounds over the 181¾ limit. Weighing around 187-188, his best practice lifts (750-440-690) give him a gym total of 1880, and he was hoping to be near that at the World’s. Figuring to lose quite a bit on the squat as he lost weight, and to lose a little on the bench press, he was confident of having the strength to make 722-435-722.

In my opinion, and the opinion of his good friend and coach Tony Fitton, he DID have the strength, as his 711 squat and 424 bench press were strongly done, even though they each drew two red lights. In the deadlift, of course, his 722 was done with power to spare. He feels, and I agree with him, that he is capable of a 1900 total as a lightheavyweight. That is his immediate goal. After that, he is considering increasing his bodyweight and competing in the 198¼ pound class. As I said earlier, the boy ain’t studying no retirement.

Concerning the proposed Super Bowl between him and Larry Pacifico, Ron feels that Larry couldn’t compete effectively at 181 and that at 198 he (Collins) would have to train for A COUPLE OF YEARS before all the extra weight would begin to really work for him. Suggestions have been made that they split the difference and meet one another at approximately 190 pounds, but this is impractical since it might conflict with either of their yearly training cycles. Should they work out the details and agree to a head-on match, it would be the stuff of which legends are made.

An extremely calm and thoughtful man, Ron works as an engineer. He’s been with the same company for almost twenty years, and they are very understanding when he needs time off for his travels. His wife and son also support him strongly in what he does, and see that gets the sort of food he needs to continue his remarkable career. Regarding diet, he tells me that he takes very little supplementation other than Vitamin C, but he eats lots of meat, fish and the whites of eggs.

Through my years of Collins-watching, I’ve come to have a deep and abiding respect for this small but gallant man. Some of us in lifting tower over him by a foot or more, but he towers over all of us when it comes to that one crucial aspect of being a champion that Hemingway said was the most important. True champions, Papa said, had “GRACE UNDER PRESSURE.’ No one in lifting has this as Ron has it.

In closing I’d like to quote several passages from a previous article of mine. The passages deal with Ron Collins’ lifting in 1975 in the World Championships in England. They seem to capture the unquenchable spirit of this man who burns with a cool blue flame.


At 622¾, Collins emerged to virtually ice down another world crown, and as he strode to the bar, his muscles bulging tightly under his fair skin, his long, jet-black hair surrounding his youthful face, no one would have guessed he was forty-one years old. He hauled the 622¾ from the floor in a surge of strength that brought shouts of certain victory from the crowd. The effect, however, caused Collins to cramp badly, and the cramps, plus a slight injury he apparently suffered in the squat made it necessary for the spot-loaders to carry him off stage.

Meanwhile, Collins had recovered well enough back stage to hobble back onto the platform to take a 672½ second attempt which, if successful, would give him a new world record total. He limped out, chalking up as the crowd cheered him on, then bent, set, heaved, and the record was his. It caused him to cramp so badly the he could once again barely walk away. As he limped off, I’m sure that most people felt that the injury, the cramping, the new world total record and the world title would mean that he would forego his last attempt, but then Ron Collins does not think now, never has thought, and never will think like most people. And so he asked for 700 pounds to be loaded onto the bar. To describe this dramatic attempt I will quote exactly from my notes as follows.


He steps painfully onto the platform for the 700. I think he’s got a shot at it. The crowd is shouting, helping to psyche him for the effort. He limps to the bar, pain showing on his face, but he is careful not to rush the lift. As he bends to grip the bar, he has only ten seconds left on the clock. He sets, looks up, pulls, and simply masters the weight; and as the weight goes up, so does the crowd, brought up by the awesome courage and tenacity of the man. And I, for the first time in my life, at a lifting meet, feel tears come unbidden to my eyes as I join in paying tribute to this man who has as much right as any man ever had to be called history’s greatest powerlifter. The ability to make such a lift with only the pressure of pride driving away the pain moved me as I have never before been moved by a lift. Perhaps it is partly because in winning, he won for Great Britain, who had worked so hard and provided so well and generously to stage the contest. For them to have at long last a champion of their own seemed to redeem the British team and create a proper mood for this great meet.


In that contest, Ron was chosen Champion of Champions – Best Lifter – an honor he won again in 1976. If any man has ever deserved it more I’ve yet to see him. To me, that phrase serves better than any other to describe this wonderful, ageless athlete – he is, indeed, the Champion of Champions.