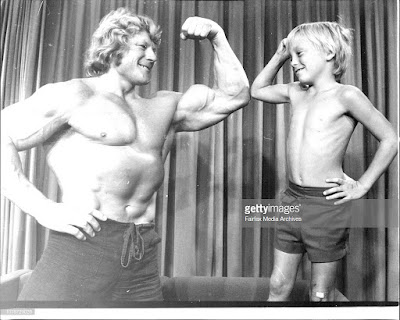 When I first became interested in muscle building years ago, I could think of nothing more than big arms. This is something all beginning bodybuilders are guilty of. My early routines consisted of curls and dips, dips and curls. Many days were spent pushing and pulling my poor triceps and biceps.

In a year's time I had developed a pair of good arms by virtue of this "priority" training. With the tape showing a solid 15" I felt my efforts were not in vain. And by this time (after twelve months of curling and dipping madness), my shoulders and chest showed signs of accidental muscle growth. This spurred me on to expand my training, and by the end of the third year I was socking it to the entire upper body.

Slowly but surely things were shaping up and, fortunately, my potential had now become visible. I say "fortunately" because it was then that I met the master of the bodybuilding world - Joe Weider. I awkwardly stumbled into the Weider Barbell Co. in New Jersey, asked for a pair of 20-lb. plates and wound up with a career, fame and glory.

Joe was completing a workout with Leroy Colbert, in the storage area. He introduced himself and Leroy, and insisted I remain for a workout . . . and the rest is history. Joe took my 200-lb. body and through skillful programming, transformed it into something worth of two major physique titles.

For Joe the upper body was routine. The basic formation was there. All that was needed was a little more training sophistication. Apply flushing here, priority there, a half dozen new angle movements, proper nutrition and - BINGO - the "Blond Bomber" . . . or, at least one half of the Bomber.

But there was the conspicuous lack of leg development to contend with. I had avoided leg training like a longshoreman avoids milk. A short run three days a week was enough to save my guilt of neglect but not enough to build my leg muscles. They presented a real challenge to the world-famous trainer of champions. To put my thighs in balance with my accelerated upper body would require long-term planning and years of hard work.

The plans went into effect immediately. Size was the first consideration, power the second. I did full squats and half squats until my vertebrae pulverized and my thighs exploded. In eighteen months there they were - two huge and powerful tree trunks measuring 28.5 inches. I must admit they were mean and meaty; yet, they lacked the symmetry essential to the good physique.

And so, into effect went phase two of this long-term thigh program. I was now ready for the sculpturing techniques similar in effect to those already being successfully applied to the upper body. But exactly what combination of techniques and routines for maximum benefit was yet to be determined. And this is where the real science of bodybuilding comes into play.

I planned a applied countless methods of operation. Some failed completely, some failed partly. I was groping for that routine that would do the trick, give me the shape, quality and muscularity I needed and needed fast. Finally, out of sheer desperation I incorporated an exercise we had seen performed by an avid ballet student in a New York gym. This movement, combined with an advanced tri-set technique, proved to be the 'magic combo' my thighs required to respond to in every way. New shape was apparent in less than a month. The muscularity I lacked was soon a thing of the past. I regained my lost power and developed my endurance. By the end of one year I had accomplished what I set out to do.

The routine is far simpler than its worth indicates. It is comprised of four exercises performed in a rapid manner; it's demanding yet not all-consuming. For your convenience I've listed them in order and briefly explained their execution.

This is a unique movement performed with the feet some 18 or more inches apart and the toes pointed outward to the extent that they are in line with each other. Squat down to a half-way position and return to an UNLOCKED starting point. 6 sets of 10-12 reps of this exercise will prove effective - if you use the heaviest possible barbel held across the shoulders.

Though it is an unnatural movement, you'll find the leg muscles especially powerful in the position. Alter foot width for varying effect.

This is the FIRST EXERCISE IN A TRI-SET . . . to be followed by leg curls and sissy squats. It is the most effective combination of exercises for thigh bombing when shape and definition are goals.

The front squat is performed with feet 12 inches apart, slightly pigeoned and heels raised on a 3 inch high block. With a bar of moderate weight supported across the front delts, squat down to limit and return to an UNLOCKED starting position. The exercise will striate the front thighs and give shape to the vastus internus. Sets of 8-10 are ideal.

This is the second part of your tri-set. They will work the leg biceps strongly. Best performed in sets of high reps (12-15), they will add total development to the legs. For the maximum in biceps growth complete each set with rapid half-rep burns. 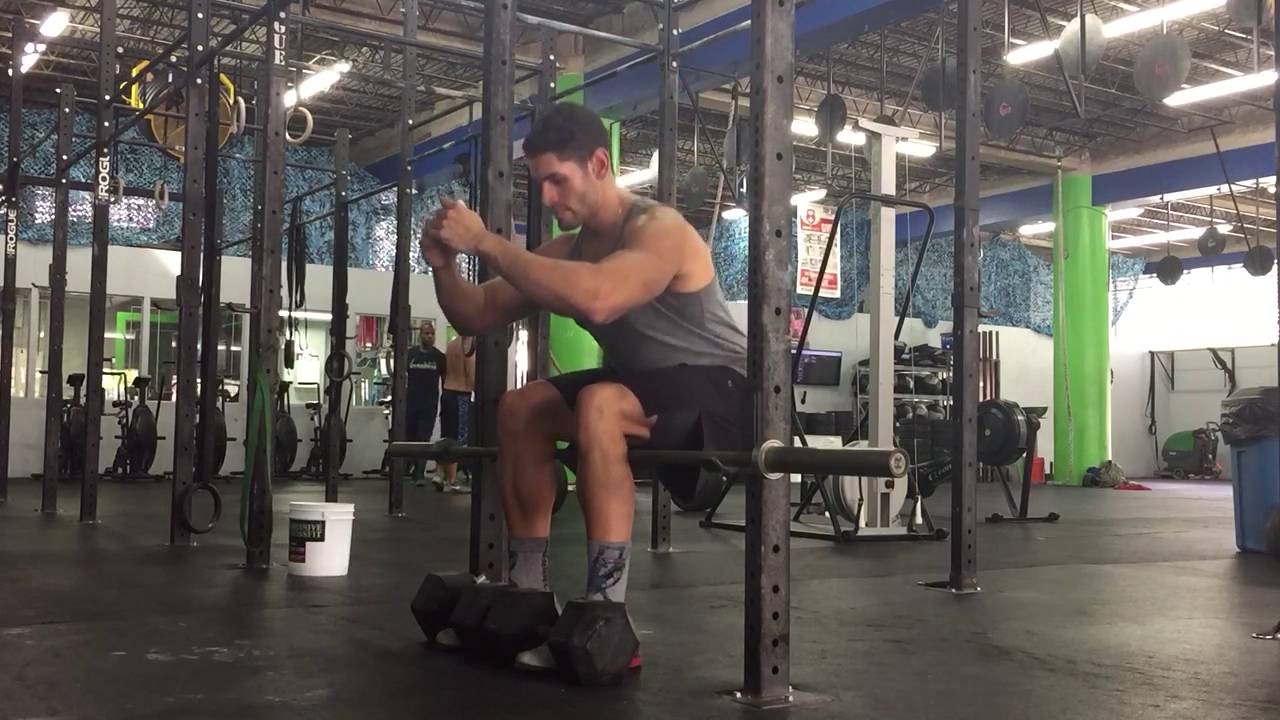 This is the last part of your tri-set, providing a sophistication to your routine and thigh development. To perform the Roman Chair Squat, assume your position on the apparatus, feet anchored, backs of the knees against the support, barbell held across the shoulders. Now squat down, but squat down as far as you sink.

To perform the Sissy Squat, place the feet about 18" apart, heels raised, and drop slowly to the knees, bending backwards as you do. Keep the upper body and thighs in a straight line - a peculiar movement to master, but once it's accomplished it's yours forever.

So much for the blitzkrieg tri-set. 4 or 5 rounds of this combo should suffice. Move along quickly, allowing no more than 45 minutes for the entire routine. The word is BURN!