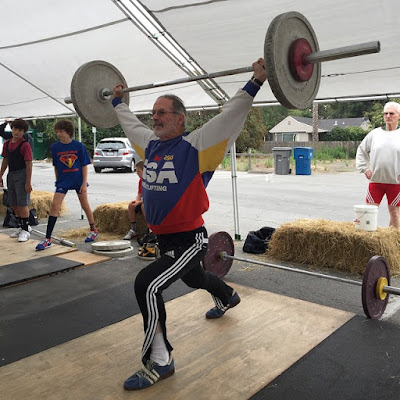 We each lift weights for varying reasons, and I am often asked. why and when did I start weightlifting? It was June 27th, 1960. I took up weightlifting in order to build myself up to be better for football, basketball, and baseball.  I noticed that the best athletes also had the best bodies and were bigger, stronger, and faster than the rest of us.

In those days very few people lifted weights as it was thought to make one slow and to develop large muscles that weren't supple and mobile, commonly called "muscle-bound." Here it is 57 years later and more people, men, women, and children are lifting weights than ever before. It's long been proven that weight training, and especially Olympic-style weightlifting, only enhances athletic performance.

However, many things influence why we lift the way we do. Why do some prefer CrossFit, powerlifting, bodybuilding, strongman, Highland Games, Olympic-style weightlifting, or any other sport that tests and requires great strength? Some of the reasons are to be physically better for a chosen sport, to look better, and to be healthier. But why choose one training method over another? Just as we are all different physically, mentally and emotionally, we have different tastes, likes and dislikes. That's why there are so many different sports and physical activities.

The main reasons for choosing a certain sport over another are that you like the sport because you are good at it, it's fun, you feel good doing it and you like the challenge - or maybe by chance you were introduced to it. Consider the new popularity of Olympic-style weightlifting. Many people are doing it just because they like it, it makes them feel and look good. Now, I think this reasoning is true for all the strength sports, but I'm g to concentrate on Olympic-style weightlifting here.

Many years ago there was a competition called the U.S. Olympic Festival put on by the United States Olympic Committee for all the Olympic sports. It was a fantastic, week-long event and was held annually from 1978 until 1995. The top four weightlifters per weight class were invited to participate, plus coaches and officials, all expenses paid. One year, I think it was 1979, we brought in the Hungarian national coach (I can't recall his name) for a series of clinics, and he shared a lot of great training information. What I remember most was what he said the most important motivating factor for the Hungarian and Eastern European weightlifters, was:

Money. They do it for the money. It's their job.

Up until around 1992, the U.S. had pretty strict amateur rules. Some of our lifters would get a small stipend of about $100 per month from the York Barbell Company, plus travel and lodging at national championships. My club, the

http://www.nevertoostrong.org/
would hold fundraisers to help defer some of the costs to the various championships. I remember at my first meeting on the IWF Executive Board in 1993, the secretary general, Dr. Tamas Ajan, said to tear the page on amateurs out of the rule book. You could now openly get paid to lift and not under the table, as it had been done.

The good news that now U.S. weightlifters can get paid, and many have sponsors so they can train full time. Also, some colleges offer scholarships for weightlifting.

The top weightlifters around the world are largely all professional and now the USA is also able to pay its top lifters.

After money, what motivates someone to want to lift big weights? Even though top lifters are able to get paid, they are a small and elite group. You have to train and compete on your own resources until you reach that high level. I lifted to get bigger, faster, and stronger in order to play football, and it helped. I was able to play at San Francisco State University from 1963 to 1967. I started as a 175-lb. fullback, but was switched to defensive tackle as I bulked up to 200 lbs. and wasn't quite fast enough to be a fullback.

I did a combination of Olympic lifting, powerlifting, bodybuilding, and fitness and conditioning training, but it was Olympic lifting that gave me the power and explosiveness to be quite good. I was defensive team captain, MVP, and All Far Western Conference. A funny thing happened on the NFL draft day in 1968: the Atlanta Falcons called me and said they had drafted me in the seventeenth round. I had to tell them they had called the wrong number, as it was another player on our team with a similar name.

After my senior year, I knew my football days were done and since I had competed in weightlifting a few times in 1966 and 1967, I wanted to pursue weightlifting.

I wasn't motivated to do weightlifting for any other reason that I liked, it felt good to do, and I wanted to see how strong I could be and how much I could lift. No money was there, and I had no chance of being a national champion or an international lifter. That was the prevailing motivating reason for us and why so many of us lifted and tried to lift more back then. We knew that, weightlifting is fun and lifting more weight is fun! We liked it, and our motivation was to set personal goals and try to hit them.

The first goal I remember was being able to clean and press bodyweight at 160 pounds, and then it was a 300 pound bench press and a 400 pound back squat. Once you hit a goal you would move it up. Eventually I wanted to bench press 400 pounds. It took me years and I had to gain a lot of bodyweight, but one day I did it and I wasn't motivated to go any higher. It was very heavy and hard and took a lot of work to get there. After that I was always satisfied with whatever weight came without too much effort - I wasn't motivated to push so hard.

That's what's really important: when the weights get heavy you have to be really determined to give as much as you can to your training to push through the barriers. When you reach your maximum and just can't break through, you might have reached your peak. What you do here is back off, rest, and build back up again and try again and keep trying until your body tells you that is as high as you can go. We all have limits, but you'll never know what they are if you quit or back off with your first or second or even third effort. You must keep trying until your body just won't do it. Hopefully you don't push through to injury. Pain and injury are the indicators that maybe you've reached your potential.

When I start someone in weightlifting, I always just say, let's see how good you can be. I don't say, you'll be a national champion or anything too lofty. I say, let's train hard and smart and see how it goes. I have so many examples . . . Ken Clark, Mario Martinez, David Langon, Than Nguyen, Rachel Silverman, Giselle Shepatin, Anne Lehman, Jo Ann Aita, and one in particular that I want to talk about, John Bergman. I was their first weightlifting coach, whereas Dan Cantore, Ken Patera, Bruce Wilhelm, Tom Stock, Butch Curry, Tom Hirtz, and Carol Cady came to train with me after they had already been coached and lifting for a few years. I always stress: 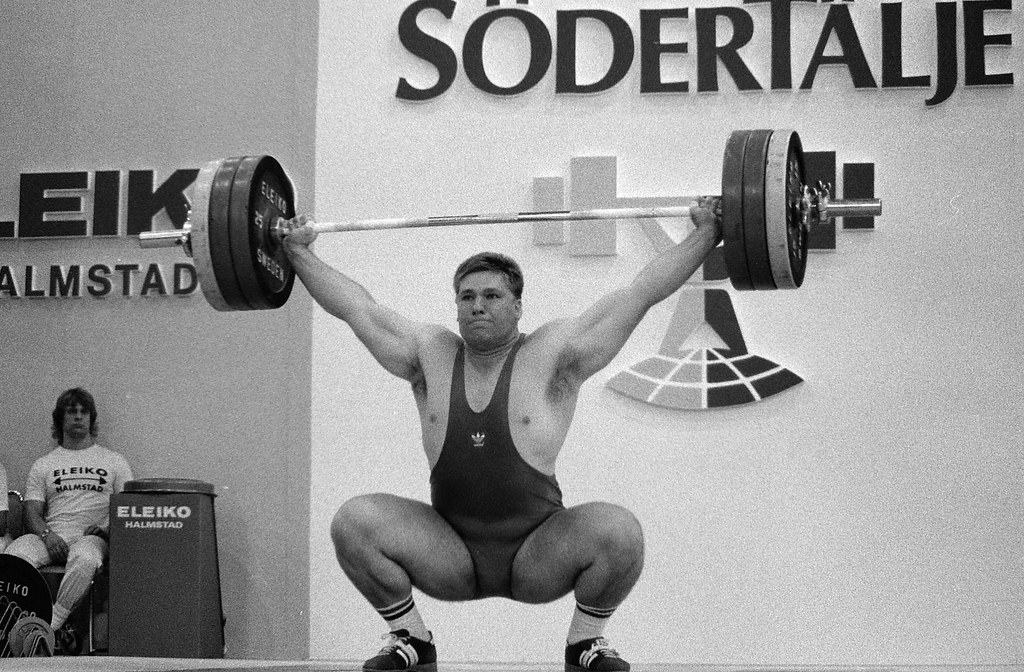 John (above) didn't start out motivated to be a national champion and to compete at World Championships and the Olympics. He took up weightlifting for football and fell in love with weightlifting and never played football again. He was pretty good, he liked it, and when he saw that he could be a national champion and compete at the world championships, it excited and motivated him. This was in the 1980's and there definitely wasn't any money in weightlifting. You had to pay all your training, travel, and competition expenses. He was motivated to see how good he could be, and he enjoyed training and competition.

John could do 175 and 215 with no problem, but when he would go over those weights, his body would just break down with little nagging injuries. It was very frustrating, nothing serious, but enough to slow down or stop progress. We would back down, train light, and build back up, trying to avoid the little tweaks. It was frustrating because he was mentally and athletically capable of really big weights, but his body just couldn't take it. He was motivated and determined to make the 1988 Olympic Team; he might have made the 1984 team, but he couldn't hold the needed weight overhead.

From 1985 to 1988 John plugged along, getting up to the heaviest weights he could handle without causing injury, then backing off, recovering and starting over. Super compensation and periodization, and it worked: he lifted enough to make the 1988 Olympic team. From looking as if he were going on to some really big weights in 1985, he limped along and achieved his goal of making the U.S. Olympic Team in 1988. I would say that due to John's motivation and determination to make the Olympic Team, he endured a lot of painful and disappointing competitions, never achieving what he was capable of - but once an Olympian, always an Olympian, and it is a very worthwhile goal.

Another question I get asked a lot is, what motivates me as a coach and why do I still lift? First, there has never been money in coaching weightlifting. Today, a coach can make some money by charging for coaching, seminars, and clinics. Some may have sponsors or are on the staff of colleges and universities that have weightlifting programs. Many coaches support their weightlifting programs by teaching CrossFit sessions or through running strength and conditioning gyms. For 49+ years, I've supported myself and my weightlifting program by owning and operating a gym/health club and doing personal training.

Why have I done it and continued to do so?

I have asked myself why so many times and thought, weightlifting must be a disease and I have a chronic case. The answer is, I love it, and it's great for you, it makes you feel great, a I love coaching it and actually still doing it. For years I wondered, what's wrong with me, why am I spending hours in the gym coaching and lifting for almost no money and my contemporaries are out on the golf course? Their vacations were in Hawaii, and Europe, mine were in Russia, Hungary, Cuba, China, Mexico, and about 35 other countries for weightlifting competitions. Actually, my travels and experiences with weightlifting were and continue to be fantastic experiences and 100% worth all the lonely hours in the gym and money spent to travel to competitions. I totally enjoy all those who are new to weightlifting and love it, and I hope it will be as meaningful to their lives as it has been to mine.

Lifting more weight, winning competitions, becoming a national champion, representing your country by making an international team, then winning medals at the highest level, the Olympic Games, that's the ultimate. Not everyone can be a champion, but everyone can lift and enjoy it. Maybe you won't be the best, but you must always try your best and you will have a successful weightlifting experience