A Veiled and Far Reaching Training Tip from Larry Scott 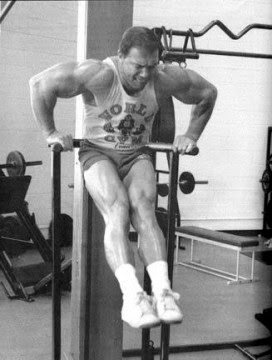 "Why do you place your hands and elbows in that position?" Paul Barlow, a future Mr. Utah, asked me. "I've watched you do those dips that way several times now and I have meant to ask you if there was some particular reason you are doing them that way."

I had noticed Paul watching me closely while I was doing Gironda Dips, but I was hoping I wouldn't have to take the time during my workout to explain what I was trying to do.

Now that he had taken the initiative to inquire, I felt obligated to explain how this exercise was superior to many chest exercises.

"The first thing you will notice, Paul," I said, "is that the bars are not parallel but form a V-shape. This is important because it allows the palms to be reversed so they face out, rather than facing in when one is doing conventional dips on parallel bars."

We want the palms to face out because this allows the elbows to move through a much greater range of motion. Remember, chest works only when elbows move. This palm position also allows the elbows to be thrust forward to where they are even with the shoulders, rather than behind the body. As the body is lowered, instead of keeping the back in an arched position, the chest is held in a concave position and the feet are thrust forward rather than back.

Yes, I know it sounds strange, but once you place your body in this position on a properly designed set of dipping bars, you are about to strike a vein of pure gold.

Slowly lower the body, keeping the feet thrust forward, the chest concave, the chin on the chest, and the elbows forward. The moment you reach the bottom, you'll sense the joy of the pick biting into yellow metal.

Don't push with the pecs. Pull with them, pull those arms to a straightened position. And remember to keep the chest concave and the chin down on the chest even on the way up. Don't be tempted to arch the body or let the elbows stray to the rear even when upward movement almost stops. Keep the elbows forward and pull yourself up. It's incredible!

There are a few signposts I must point out to help you find the mother lode.

First, this should never a beginning movement in your workout. Do this exercise after you have done 60-70% of your chest routine. You need blood already pumped into the chest for this to work.

Second, doing dips in this fashion is an unusual exercise. The pecs won't quite know what to make of this movement so they must grow to avoid the extreme stress. And because it is so unusual, the pecs will quickly grow stale on it. Therefore, don't expect to experience this amazing pump and burn, or even more important the burst of growth, for more than one week.

Switch back and forth using this exercise for about one week out of every six.

Some nice tips in that short article! And an opportunity to realize the bodybuilding genius of Larry Scott, may his beatific soul rest in eternal peace. Advanced lifters of the bodybuilding persuasion never fail to amaze me. For a time, after training since the late '60s,  I thought I knew something about individualizing exercises for specific goals. Not even close to knowing most of what there is to learn yet!

Elbow placement and arc of movement make a world of difference in chest training for the bodybuilder. Just as they do for the powerlifter's bench. One of the primary differences between strength training and physique training is of course . . . wait for it . . . drum roll . . . THE GOAL!

It's highly probable that each of us would see our way sooner to that city named Succeed if we'd  bloody decide . . . What Do We Want From Our Lifting?

Varying the leverage points, the angles of attack you might call them, can lead you to realize some great gains in a much shorter time, in both of the basic lifting disciplines. Strength. Physique. Olympic lifters have the goal of increasing their Snatch and Clean & Jerk. That's it. Thar she be, Matey. The destination is clear from any distance. Row, row, row your boat closer and closer to that high total over time. They spend enormous amounts of time and energy dissecting and reassembling their form in order to get one step closer to perfection in the lifts. Similarly, the intelligent bodybuilder will likewise spend time refining his exercise execution, altering hand placement, leverage points, etc., in order to better isolate the muscles in an appropriate way. Mastery, Matey. Now where's them singin' sireens to steer we a bit off course.

Of course, and this still makes me laugh. Not "Hahaha" laugh, though. More of a bitter laugh, more along the lines described by Charles Baudelaire in "The Essence of Laughter . . ." Powerlifters, Oly lifters and Strongman competitors hone and tweak their technique, always looking for even the slightest edge/advantage in their form. However, it's rare to see bodybuilders spend much time or energy teaching themselves how to come to realize the form required in a specific exercise movement variation that will enable them to get what they're after with it. It's usually swept under the rug, due to laziness and/or frustration, and instead the goal becomes more . . . More . . . MORE weight on the bar.

The bodybuilder, without question, can use strength gained in positive ways en route to his dream physique. However, strength is a secondary goal. A form of strength that we might call "isolative" strength can help reach that goal. Gironda Dips are a perfect example of isolative strength. The body is intentionally placed in a very "weak" position in order to stress the pectorals in a specific fashion, and it takes a different kind of strength to reap rewards from an exercise such as this.

"Hooey, baloney and balderdash," you say? Remember, I can hear you. "A muscle works much like a door on a hinge." Really? "It doesn't matter what position you place yourself in or the angle of stress created by varying the leverage points. You cannot isolate a part of a muscle." The white labcoats and their ilk continue to pimp their papers, while time and time again industrious human examples willing to truly experiment ignore them and proceed to show the exact opposite.

Several decades ago, likely as a backlash to the Golden Era volume approach to bodybuilding, the short term popularization of HIT training, certain fictitious training routines in muscle mags, the false claims of supplement companies and finally perceiving the full impact of anabolic steroid use, the idea that strength-based training would result in a bodybuilder's physique for almost anyone become a popular belief. Again, the same mistake. There's that history deal with us humans again. We can't seem to stop believing there's one and only one right way to do anything. If THIS isn't it, then THAT must be. The one right way to train for a better physique, to eat, to be a "success" or to live life "properly" before we stop breathing and it all means naught. Each new generational wave realizes too late and hits the rocks, finding too late that yes, they were indeed stillborn and the illusion of a "new" generation birthing exceptional redemptive ideas was just that: illusory and destined for death on arrival. The most important thing in the Universe is life. Here's to life, Life, LIFE! More of the same in different guise. Cheers to cycles, Cycles, CYCLES! We're all dead but don't yet know it.

Where the hell was I. Oh yeah, sirens, waves, rocky shores, life's grand illusion of change and all that. When I type the word "sea" and you read it do you smell the sea? More's the shame if ye do not. Words, symbols that for most elicit only the image. Rose. The image of a rose. We do, after all, have five senses. Rose, The scent of a rose. Rose. Velvet to the touch. You see where I'm going here. Go there yourself. Or don't.

Right! The appropriate and intelligent manipulation of our leverages, based upon the lifting goal, can lead to the improvement of our genetic placement on the totem pole.