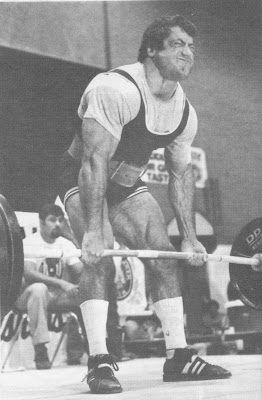 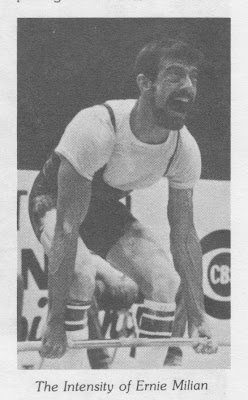 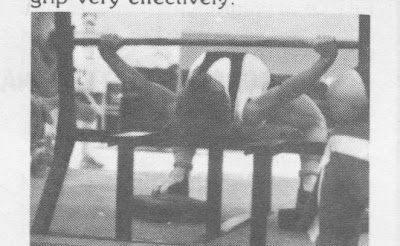 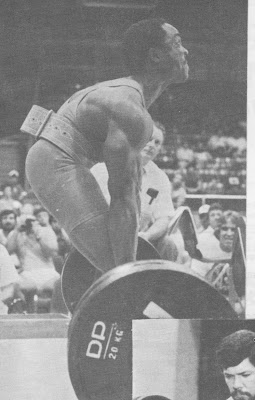 Ripped for Powerlifting
by Clarence Bass ( 1981)

When I learned Bill Ennis had reduced his bodyfat to 5.5% and increase his total from a respectable 1731 to a superb 1906, like you, I wanted to know how he did it. Bill told me the most important thing he did was to use body composition tests. He was already at the top of his weight class. To increase his total while staying in the 198 lb. class he knew he would have to replace fat with muscle. In other words he had to put more muscle in his 198 lb. body. For every pound of muscle he gained he had to lose a pound of fat. Underwater weighing (hydrostatic weighing) told Bill how much of his bodyweight was fat which could be replaced with muscle.

Bill's first underwater weighing on April 15, 1980j, showed his bodyfat was 9.8%. Vicki Dillon, founder and president of Body Accounting, explained to Bill that 15% bodyfat is considered good. For males over 20% is obese and under 10% is lean. At 9.8% Bill was already quite lean, by normal standards. Some male athletes, however, have reduced their bodyfat to 3% or lower. The body must have fat to protect the internal organs and assist in the functioning of brain and nerve tissue. The fat that's necessary for good health is called 'essential fat'. Exercise physiologists generally consider 3% to be the essential fat level. Fat in excess of 3% is 'storage fat' and can be lost or replaced with muscle.

Bill's first weighing showed that his 204 lb. bodyweight was 20 lbs. fat. He needed 6 lbs. of essential fat (3% of 204). He targeted the remaining 14 lbs. of fat storage for elimination. To accomplish his goal he refined his diet and training program.

At the time of the first test Bill's diet was mainly milk, meat and cheese, i.e., high protein, high fat and low carbohydrate. He lowered his fat intake and increased his carbohydrate consumption while keeping his protein intake moderately high. To reduce the fat in his diet he switched from red meat to fish and chicken and eliminated egg yolks. He continued to eat 9-18 egg whites a day. He dropped milk but continued to consume low fat cottage cheese. To up his carbohydrate intake he ate plenty of raw vegetables and fruits. He routinely ate 6 oranges and 6 apples daily. He kept his total calorie consumption stable, because he wanted to maintain his bodyweight at 204. His switch in emphasis from fat to carbohydrate gave him more energy so he could train more intensely. Bill's training sessions were short and heavy, 45 minutes to an hour. He concentrated on one lift each training session. This is basically the same training session Bill used before. In the past, however, after hitting his maximum poundage for the day he would back off and do several sets for reps. He decided that lowering the weight for reps was counterproductive; it cut into recovery ability and slowed his gains.

The result of his change to a more balanced diet and greater training intensity speaks for itself. He lost 8.82 lbs. of storage fat and gained 8.22 lbs. of muscle.

Bill emphasized that body composition testing was the main reason for his improvement. Knowing his exact body composition gave him a specific goal and motivated him to improve his diet and training to accomplish that goal.

As I write this, Bill has just begun his peaking program for the powerlift nationals in July. He's further reduced his bodyfat tot 3.8%! He's going after his remaining storage fat so he can put more muscle in his 198 lb. body. The results from Corpus Christi will show if Bill squeezes more muscle into his 5-lb. bag.