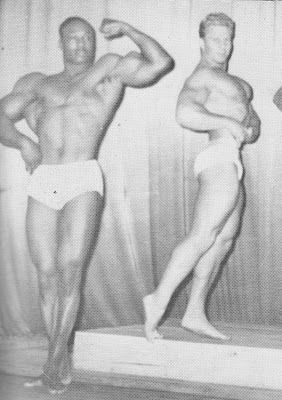 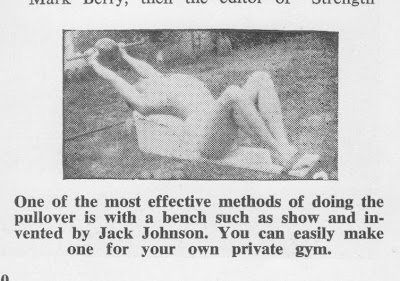 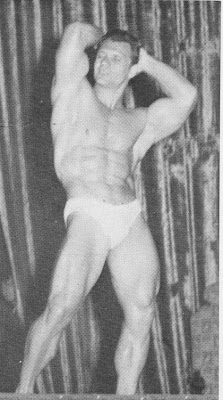 
What are the objects of the "Hise Shrug" and what does it accomplish? My answer to this question is that it works on the "red muscles of posture," reshapes the chest, teaches "costal breathihng" and stimulates the Reticulo-Endothelial system. ( Also called Macrophage System, or Mononuclear Phagocyte System, a class of cells that occur in widely separated parts of the body and that take up particular substances. These cells are part of the body's defense mechanisms. Reticuloendothelial cells are phagocytic; i.e., they can engulf and destroy bacteria, viruses, and other foreign substances.)

The red muscles of posture are those muscles which hold the body erect. Once substantial poundages are able to be used in the Hise Shrug, the soleus and peroneus longus (Peroneus Longus is one of the peroneals muscle group which pass down the outside of the lower leg and turn out the foot) are strengthened and stimulated to growth by keeping the body from falling forward, although leaning slightly forward during the shrug. The thigh group is exercises by keeping the knees locked. The spinal erectors keep the back straight while supporting the weight. The abdominal muscles resist the diaphragm action during the breathing. The accessory muscles of respiration are developed by raising the shoulder girdle and rib box against the resistance of the weight.

When studying exercise or kinesiology, one fact must always be kept in mind. A muscle has only one action. That action is to shorten itself through contraction. The diaphragm is a dome-shaped muscle forming a partition between the thoracic and abdominal cavities. Its origin is an approximately circular line attaching to the upper lumbar vertebrae, lumbar fascia, lower two ribs, and in front to the six lower costal cartilages and sternum. It has a central tendon, which forms the dome. The tendon inserts into the front of the cervical vertebrae. When taking a deep breath, the diaphragm muscle fibers shorten, lowering the dome, and bring pressure on the abdominal viscera. The abdominal muscles and central tendon resist this action. As the contraction increases in intensity, the central tendon and abdominal muscles resist lowering of the dome, so the lower ribs are pulled inward and upward. The straighter the cervical and upper dorsal spine is kept, the higher the diaphragm is held by the central tendon, and the greater pull on the lower ribs. That is the reason the harness or circle should be more efficient on the breathing shrug. A barbell on the shoulders requires one to hunch the shoulders and neck slightly to keep it in place. The diaphragm pulling inward on the lower ribs accounts for the reshaping of the lower rib box (refer to Brown and McKenzie book "Applied Anatomy and Kinesiology" for complete description).


The question was submitted, "Why must the shoulders be raised and the front of the neck contracted on deep breathing exercises?" This question can nicely be answered here in this discussion. We have a group of muscles called accessory muscles of respiration. They assist the diaphragm and intercostals on vigorous inhalation by raising the shoulder girdle and lifting the upper rib box. This gives more space for the lungs to take in oxygen. These muscles are the sterno-cleido-mastoid, scaleni, serratus posticus superior, pectoralis major, and the upper trapezius. Remember as a child how tired the neck became after running a long distance? The above-named muscles were in action.

The sterno-cleido-mastoid originates at the mastoid process of the skull and inserts with the front of the sternum and inner fourth of the collar bone. Holding the neck erect, this muscle on contraction lifts the portion of anatomy where it is inserted. The same holds true for the scaleni which originates on the transverse process of the cervical vertebrae and inserts into the first rib. Mentioning posture once again, it is impossible for the scaleni to sustain and lift the chest when the neck is not held straight. A serious result of a mild case of round shoulders.

By the same process as I have used you can determine the origin and insertion of the accessory muscles of respiration, and learn their action. http://moon.ouhsc.edu/dthompso/namics/respmm2.htm The above paragraphs should also show you the purpose of the towel exercise (wrestlers bridge) and the upright rowing motion.

When studying muscle development another fact must be kept in mind. All skeletal muscles have a tendency to shorten. This phenomenon is called muscular tone. Now then, when a muscle gains greater strength than its antagonists the muscle starts shortening. In the case of the accessory muscles of respiration, these muscles would lift the rib box higher, straighten the neck, and pull the shoulders square. The result is improved posture. You have seen the opposite condition. Over-development of the pectoralis majors with under-development of the trapezius cause round shoulders and neck jutting forward. Medically it is called a cardiac curvature because certain heart cases do assume this posture.

Hise calls this condition "hunchbacks of the beach."

The amount of weight to start with on this form of the shrug will depend on how long one has exercised with weights. The novice can start with about fifty pounds more than he used with the dinky squat. If one has been lifting weights for a year or more he can start out with 250 to 300 pounds. An old dyed-in-the-wool weight man can start with 300 to 350 pounds. I believe that a ten-pound increase per workout will not be too great. The second and third set can be reduced about one-seventh to one-eighth of the poundage used on the preceding set. 50 pounds reduction per set is about right when you attain higher poundages.

Constantly watch the arch of your chest. Almost overnight after reaching a certain poundage, you will suddenly see a very definite reshaping of your chest. I would suggest continuing with this poundage and only increasing it five to 10 pounds per week. Changing the increases to this pattern will enable you to gather the full benefits of the poundage before advancing to greater weight. Everyone who is normal should eventually be using 500 to 600 pounds and a few individuals will be using 800 to 900 pounds in a short time. [A 'short time' by 1949 standards.]

The correct number of breaths on each set will depend on each individual. 20 reps will be right for some, others will need 25, 30, 40 60, etc. The best way I can tell you how to determine the correct amount of breaths per set is by my own experience. It may take five to 12 reps before the action becomes smooth. One of the many reasons for this may be that the bar is not placed just right on the shoulders. After these preparatory repetitions the shrug will move much easier. Suddenly the exercise will become a much greater effort. I would not do over 5 breaths per rep after this greater effort is noted. Remember you are teasing these muscles! The shrugs are followed by bent arm, round-bench pullovers.

I have one suggestion for you to note on the pullovers. Change your position on the round bench until you feel the pull in the first and second rib area next to the sternum. Three sets of 20 reps each are to be performed with the pullover. This exercise is to stretch the costo-sternal cartilages between the ribs and sternum, lift the thoracic cage, and stimulate the cartilage mass.

One set of heavy quarter or hip belt squats is performed next. Eight to 15 repetitions per set. The poundage should be one-half of the shrug or a little more. This is very important because if the legs are not strengthened they will not be able to straighten under the weight which you are capable of shrugging.

Two sets of front shrugs. This exercise is to be done like the breathing shrug except the bar is held racked in front of the chest, as if you were preparing to jerk the weight. The weight is forced up and down both by breathing and deliberate muscular effort. The range of motion may be a little greater than the regular shrug. The hands are held in rather a narrow grip. Possibly a little less than shoulder width apart. The weight will be lighter than in the regular shrug, but you will be surprised at the amount you can handle. I used 325 pounds the first time I tried it. Two sets of seven to 12 repetitions per set. Later, when you specialize, use five sets. The Harvey-Maxime bar http://ditillo2.blogspot.com/2008/11/stability-pull-lockout-power-charles.html would be just the thing for this exercise. Lifting stands or boxes will be necessary if using a regular barbell.

The back press with dumbbells on incline bench with head at the highest end of the board. Two to three sets of 10 to 15 reps are to be used.

I understand this is the pattern you are to assume on the Hise exercises. Concentrate on the breathing shoulder shrug until you hit the peak which should be in six to eight weeks. At that time change the routine, doing only one set of regular shrugs and concentrate on the squat using three sets. When you attain a squat peak change to the front shrug doing three to five sets and only one set of regular shrugs and squats. Eventually you will be back to the breathing shrug.

I understand Joe Hise is now working on exercises for the development of the supportive muscles of the body. The muscles for instance that hold the shoulder blade in a certain position when lifting a glass of water to the mouth. [Lifting the glass to your mouth and then holding it as you drink requires your rotator cuff to perform properly.] These exercises will build terrific body and ligament strength. The Harvey-Maxime bar should be ideal for this purpose. Maybe I will hear from Joe on this subject in the near future. I also understand he has found what he considers the only natural abdominal exercise to dote. These exercises are definitely indicated after attaining the rare benefits of the shrug etc.

In conclusion I wish to state two extremely important requisites. First, is the conviction that this system WILL WORK. I have attempted to provide fact-based reasons why. Second, a high calorie diet is a must with skinnys.

I hope this paper has been of some help on the Hise exercises and theories.