The True Story of Roger Eells - Harry B. Paschall 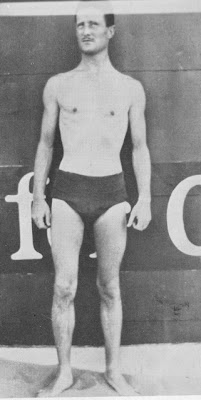 Roger Eells is shown here at a bodyweight of 135 pounds. This photo was taken after he had trained for three months and increased his weight 14 pounds. His left lung was collapsed by artificial pneumothorax at this time (produced by the injection of air, or a more slowly absorbed gas such as nitrogen, into the pleural space to collapse the lung), and remained collapsed until December, 1934. During the entire period from December 12, 1932 until December 1934, Mr. Eells exercised under these difficulties. It is his opinion that he would not be alive today except for progressive weight training. The left lung was permitted to return to normal activity and has remained so for the past five years. One would never believe, to look at him today, that he was a far, far advanced case of tuberculosis given but three months to live a few years ago. 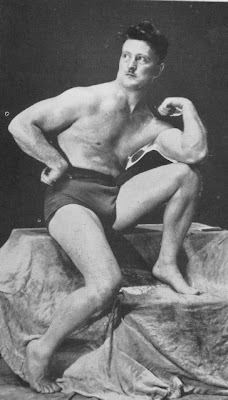 In the above picture you see Roger Eells as he is today weighing 185 pounds. The contast shown between the two photographs does not tell the entire story, however. The top picture was taken at a bodyweight of 135 pounds, but Rog weighed but 121 when he began exercising. A few months prior to this when he was informed by his physician of his tuberculor condition he weighed 109 pounds, dressed, on the doctor's scales.


To many of our readers this will not be an entirely new story, since many of the facts herein related have appeared in printer's ink before, yet I feel it a privilege and a duty to give new readers a brief word-picture of the editor of this publication (Vim magazine); a picture which will give you a better conception of Roger Eells and the ideals for which he stands.

It is always best to begin your story at the beginning, because otherwise some obscure point may be lost which may be important as the plot develops. Roger was born and brought up in a typical small Midwestern town; his parents were strong and healthy, in fact, rather unusually so, because I have often heard Rog remark about the unusual strength of his father, and the ease with which he handled heavy caskets (both his father and brothers were undertakers). He had two brothers who were also unusual physical specimens; one standing 6"3" and weighing 240 pounds, while the other was just under 6' and weighed 190.

Rog was the youngest of these three brothers, and by all odds the smallest and weakest. Being the baby of the family he was unfortunate enough to be petted and spoiled; he grew up on a diet of candy and cakes, and subsequently became a ready victim to every ordinary ill of childhood. At 14, upon entering high school, he tipped the beam at 93 pounds. Before him were the heroic athletic traditions of two husky football playing brothers, and Rog was determined to carry on. The third night of practice a 180 pound avalanche ran him down and he gave up freshman football with four ribs broken and numerous bruises. Next year he loaded up on pie to the extent of 118 pounds, and this season he made the team at end, but the first game saw three more ribs hors de combat, and he finished out the season only by wearing a ten inch heavy belt and enough tape to wrap up an Egyptian mummy. He continued to take this punishment for two more years, without gaining much in either size or strength. The point is, he should not have been playing a bruising game like football with his frail physique, but the very knowlege of his weakness made him want to prove to others that he really was a tough, two-fisted he-man.

Out of school he picked on another sissy pastime; he raced automobiles on dirt tracks, and for a number of years he held the half-mile dirt track record. Auto racing became too tame, and he took up aviation, operating his own flying sevice. Still playing with fire; this time the moth came too close to the flame. He fell into a whirling propellor, severing the muscles of his right thigh and lost so much blood that in his already weakened condition he dropped 21 pounds in three weeks. This was the straw that broke the camel's back. He slipped into tuberculosis. The doctor's examination showed two cavities in the left lung larger than a silver dollar, and twenty more the size of a dime. The right lung had three large cavities and many smaller ones.

The verdict was terrifying. At the outside, three months to live. How many young men would have caved in and given up at the unequal struggle? Yet Rog, having played with Death for several years,m determined to give the Grim Reaper one last strong struggle, and this time he was determined to either die or come back with a truly strong, healthy body.

For six months he battled the plague with his left lung collapsed at the Mt. Vernon Sanatorium. The rest care effected considerable improvement, and he came home to spend another year and a half continuing the cure.

Each day he struggled to spend less time in bed; to gain a little much-needed strength by light exercise such as walking. Slowly but surely he began to come out of the Valley of the Shadow, and his determination grew to develop a strong and healthy body.

Casting about for a means to this end he became interested in physical culture and bar bell training, and on December 12, 1932 he began progressive bar bell exercise, using one the 15-lb. bar of his outfit. At this time he weighed 121 lbs. at a height of 5' 7¾ ". His chest was concave; every bone in his body was visible. Beginning bar bell exercise under these conditions had never previously been attempted. Doctors counselled REST and no vigorous movement; but after two years of agony and weakness, Rog was determined to either kill or cure, to win or lose by a knockout rather than tossing in the towel.

When he started bar-bell exercise his left lung was still COLLAPSED, and breathing was painful and difficult; for weeks and months it seemed like a losing battle against impregnable odds. Then came a day when he started to gain -- in strength, in weight, in muscle. The bones began to lose their jagged outlines, the chest began to lose its sunken appearance, neck and face began to fill out. A true bar-bell miracle was taking place.

In a year Rog gained 41 pounds, increased his chest 10 inches, widened his shoulder three inches, put a solid six inches on each thigh, and added a full inch to his stature. A far different picture of a man than the one who had weighed but 119 pounds dressed when he hears the doctor's verdict of "Three months to live."

It was at this point that Rog came to Columbus to work and study, and since those days we have been very close. We have trained together, lifted together, talked together. I know of no one who is so enthusiastic about bar-bell training and the sport of lifting, and I am sure that no one deserves to be more enthusiastic than the man who was brought back from the verge of the gtrave by the intelligent application of "iron pills".

During the past four years he has continued to grow in strength and size; he now normally weighs around 185 stripped, and bent-presses 250 (has had 270 to straight arm). And furthermore he bent-presses with his WEAK arm! That's what I call results! I know of no one better fitted to be the editor of a magazine devoted to body culture than Roger Eells, because he has startingly demonstrated the benefits of weight training on his own body. And because of his inquiring mind he has made many notable experiments in breathing and weight gaining exercise which have helped hundreds of others to make similar gains.

Members of the medical profession consider his case miraculous. As a matter of fact, some of them don't believe it! Yet X-Ray photographs show that his lungs are absolutely and completely free from scar tissue, and his physical proportions would convince the most skeptical that here is a husky guy who was never sick in his life!