Bodybuilders and the Press - Charles Fraser 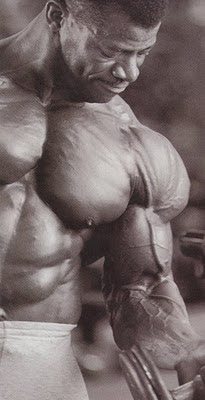 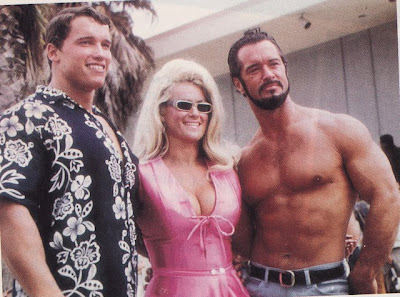 Press On
by Charles Fraser


It was 1958, and we were in Detroit, heading toward Chinatown to get some mu shu after watching one of the three USA-USSR weightlifting contests held in Chicago, Detroit and New York. I found myself squeezed into the backseat of the car between two burly gents, both of whom had the most fabulous deltoids I'd ever seen.

On my left was Norbert Schemansky, the greatest and best-built heavyweight lifter this country ever had. Bodybuilders and weightlifters were in awe of him. On my right was big Jim Bradford, the gentle librarian from the Library of Congress. He waqs one of America's best Heavyweights, not to mention the owner of the most enormous and strongest deltoids in the world, with the possible exception of Paul Anderson.

Jim had just competed against Alexei Medvedyev, a top Russian Heavyweight. Schemansky was sitting this one out becasue he was recovering from back surgery. I had attended the contest as an extra backstage interpreter because I could speak Russian.

On my way to the restaurant we passed Tiger Stadium. An exhibition game was being played that night at which Stan Musial, the Cardinal great, would be present. To make conversation I commented about Musial. Norbert, whom I consider to be one of America's greatest athletes of all time, was bitter about the lack of renown for a four-time Olympic medal winner because he competes in a "minor sport" like Olympic lifting. When I brought up Stan Musial, a participant in what Schemansky regarded as an unathletic, silly ballgame, he grunted, "Yeah? So what?"

"Yeah?" Norb replied contempuously. "How much can he press?"

There was a brief moment of silence, and then the whole carload exploded with laughter. Jim Bradford cracked up. You never knew if Schemansky was angry or trying to be funny, because he always kept a straight face, never spoiling his satiric wit. It made his barbs funnier. Good old Norb! He made you proud to be involved in tghe Iron Game because he looked good, he lifted well, and he had an outspoken pride in his chosen sport. And as I said before, what a set of delts!

I've never seen a weightlifter who didn't possess marvelous deltoids. Those half melons capping the shoulders are built by every motion done in Olympic lifting. Snatching and cleaning are a kind of cheating upright row that works the lower range of delt movement. Presses and jerks work the upper portion of the delt movment.

The function of the deltoid is to raise the arm from the side to an overhead position. Pressing was dropped from international competition in 1973 because it was deemed too difficult to judge fairly. Weightlifters were jolting their chests, torsos, hips and even their legs to impart more momentum to their presses. This enabled them to press almost as much as they could jerk. It was a pity that this demonstration of shoulder and triceps strength was abandoned. It was the grit lift of the Olympic three.

Most bodybuilders still practice the overhead press in some form because it is the best single exercise for the rounded triangle of muscle that caps each shoulder. Many, however, do a lot of be nch presses in place of overhead pressing. The problem is, though, that the bench press doesn't develop the shoulders and triceps as well as the overhead press.

Many bodybuilders believe that the regular overhead press works mainly the front portion of the deltoids. This is not true. Even though the elbow may be angled out to the front, the whole deltoid still works hard to raise the arm. Simple observation will prove this true. Whether you bring your arm forward or to the rear, the whole deltoid muscle turns with the arm as one piece. The middle and rear heads will be working even if the arms are pointed straight forward from the body as in the forward deltoid raise.

In most of the articles on deltoids in the various physique magazines bodybuilders are urged to do delt raises to the front for the frontal heads, to the side for the middle heads and to the rear -- with the body bent forward -- for the rear heads. This does put a little more emphasis on each of the individual heads, but not nearly as much as many think. And none of the deltoid raises -- or all three together -- develop the entire muscle as much as the overhead press. This is because the overhead press is a compound movement; that is, it involves two joints moving, the elbow and the shoulder. When you use two joints and their respective sets of muscles in a lift, you can handle much more weight and you work the muscle much more completely. Working a muscle in isolation never develops the all-around mass that working it with a combination movement does.

We need only discuss a couple of basic exercises to verify this psychological fact. No bodybuilder ever built his or her thighs to their full potential by doing leg extensions, which isolate the quadriceps; however, many have built massive thighs by doing only squats and leg presses and no isolation work. Another example is the bench press. Powerlifters and bodybuilders who practice this exercise develop large, and in some cases huge, pectorals. You can do flying motions with dumbbells for years and never develop your pecs to the extent that you could have with the bench press. Of course, using both will help you develop your pecs to their fullest.

In addition to giving you outstanding delt development, pressing -- particularly any kind of standing press -- will work the trapezius and triceps as well as the deltoids. Also, standing rigidly under a weight and pressing it overhead forces you to control and coordinate your entire body as a pressing base. This improves balance, coordination and the ability to concentrate your whole body into a physical effort. It gives you the feeling that you're working your entire body as a unit.

Here are some good pressing exercises you can try:

STANDING BARBELL PRESS.
This is the premier pressing movement. It's also called the clean and press because you must lift the barbell to your upper chest from the floor before you can press it. After you clean the bar to your shoulders, rigidly tighten your thighs, hips and back. You can do this by slightly moving your hips forward and leaning your torso backward. Your body is locked into the shape of an archer's bow. Now press the weight straight overhead with a strong, steady push. Completely lock out your elbows and shoulders at the top. Then lower the weight to your chest and repeat for the desired number of repetitions. Keep your body tight and steady throughout the movement and concentrate on your triceps and deltoids. Because the standing press requires the rigid effort of the whole body, it is difficult to do high repetitions. For developing mass and strength, do medium to low reps. A good rep progression is 8,6,4,4,4,8-10.

You can perform dumbbell presses in an alternating fashion for variety. Dumbbell presses will demand greater concentration of your two sides because the dumbbell are not connected. This will even out your strength and development if one side is larger and stronger than the other. With dumbbells you'll only be able to use about 85-90% of what you can lift with a barbell, so keep this in mind when selecting poundages.

BEHIND THE NECK PRESS
This movement concentrates more of the effort on your shoulders and less on your triceps. Mechanically it is a weaker position than pressing in front of your neck. The behind-the-neck press forces your upper arms back and out to your sides, a position that created more backward flexibility of your arms and shoulders and puts a stretch on your pectorals. For this reason you should never do it with fast or jerky movements. You can increase flexibility and achieve a greater range of motion for your deltoids and triceps by using a lighter weight and lowering the barbell to three or four inches down the back of your shoulders.

Clean a light barbell - about 80% of what you could use in the front press -- and then press it, guiding it over your head and placing it on your traps and shoulders. Adjust your grip to a few inches wider on each side than what you use for a front press. Start pressing with a slow, steady movement. Do 10 reps down to six, increasing the weight, for three or four sets. You can do this exercise standing or sitting.

WIDE-GRIP BARBELL PRESS
This movement is favored by those who don't like the behind-the-neck press, which demands greater flexibility and can be uncomfortable and in some people cause injury over time. It was used by Olympic lifters who found it improved their regular press by making them stronger at the start. It's a great deltoid developer for bodybuilders -- perhaps the greatest.

You can do this movement standing or sitting. Your grip should be as wide as what you'd use for the behind-the-neck press. The wide grip takes the emphasis off your triceps, particularly at the start. This puts greater stress on your deltoids. Therefore, it's a good deltoid developer, but beware that you do not invite injury by using a fast, jerking start.

WIDE-GRIP DUMBBELL PRESS
For this exercise try to mimic the motion of the previous one but with the following variation. Hold the dumbbells in a horizontal position -- as you would hold a barbell -- instead of parallel. Press them up in a circular motion, moving them out in a lateral arc and spacing them as wide or wider than the grip in the wide-grip barbell press. As the bells pass the midpoint of the arc, bring them closer together until they touch at the top position. It's not necessary to achieve absolute lockout. Lower the dumbbells in the same arcing motion. You must do this exercise fairly slowly and with concentration. It also demands much lighter weights than you'd use for regular dumbbell presses.

BRADFORD PRESS
This movement is named for Jim Bradford, whom I introduced at the beginning of this article. It may be the best exercise for of all for the shoulders. Bodybuilders will absolutely love it, yet I have never seen one perform it. It is a rotary motion that draws on every part of the deltoid and maintains constant tension on the delts during the set. It is a form that incorporates both front and behind-the-neck pressing without the finish, which is mostly triceps anyway. Once a few bodybuilders start Bradding it up in the gym, this press will spread quickly.

Take a barbell that you would warm up with on regular presses. Use a grip that's wider than you'd use for regular presses but not quite as wide as a behind-the-neck press-grip. Press the bar up to hair level, then cross it over your head and lower it to your traps. Touch lightly, and then without resting press the weight back up over your head again for rep two. Keep repeating this with no rest at either the front or back position. After the first set use as heavy a weight as you can for 4 to 6 reps, each pair of presses counting as one rep. After 2 or 3 sets of this exercise you'll know it's a keeper.

Here are some pressing routines for bodybuilders at various stages of development:

These are merely suggestions. Many prefer to do just two of these movements for a few more sets. If that's your cup of tea, the 8,6,4,4,4,8 layout I recommended at the beginning of this article is excellent for more advanced lifters.