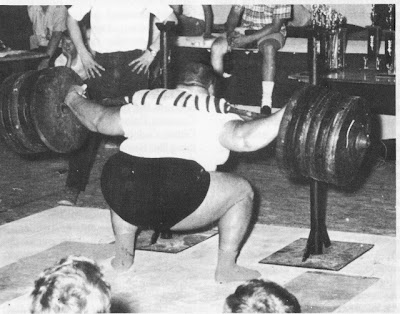 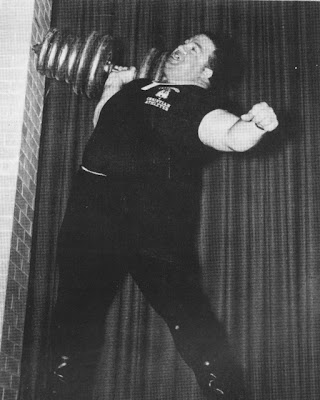 The men in their tweed coats and weather-beaten faces grew restless. "What is this fat man about? Why does this American make a mockery of our Alexander?" The crowd pressed forward. Backstage, the Soviet trainers scurried about. "So, another capitalist ploy from Hoffman. He sends no Davis. He sends no Schemanski. Instead, he sends this fat man to sell his protein powders."

Outside the crowd became disturbed, almost indignant at what was transpiring. Mindless to their thoughts, Paul Anderson asked the loaders for 182.5 kilos his first attempt. 402 lbs. of defiant steel lay at his feet. People craned their necks and stiffened their backs to see. "Who is this interloper who dares ask for this press?"

Alexander Medvedyev, World Champion, peered out behind the curtains. He knew the dangers of lifting in the cool weather. It was raining besides and that made it worse. In the breeze and mist, he had just pressed 321 lbs., some 60 lbs. off the world record, but it was more than enough to win today. Or so he thought.

Anderson laboriously approached the ponderous bar. He addressed the crowd politely, sighing heavily as he did. Bending at his bulbous waistline, Anderson encircled his thickened fingers around the cold knurling. He tightened his 10" wrists.With a grunt and a sudden tug of his 33" thighs, Anderson whipped the bar to his massive chest and arose out of the squat, much like you and I get up off the couch. He set and waited for the signal that would make him a legend.

"Press!" shouted the head judge. Anderson's deltoids and triceps sprang into action and, in about the time it takes a man to turn his head to glance at a beautiful woman, Anderson had the bar overhead. There in the cold Moscovian drizzle, Paul Anderson became the first man to military press 400 lbs.

While it may be true that the Russian hordes couldn't understand the genetic uniqueness of this man's body, one thing they did understand was strength. Immediately the Soviet media pronounced Anderson "The Wonder of Nature". Some referred to Anderson as "Mr. America", oblivious to the fact that the AAU already bestowed that title on Steve Klisanin in 1955. No matter. On that day, in Gorky Park, Paul Anderson became legend.

To hear many experts tell it, Paul Anderson, born in Toccoa, Georgia, in 1932, is the strongest man to ever claim God's Earth as home. While it's undeniable that old strength tales a like wine, getting better with age, in this case the facts do seem to justify most of the claims.

Consider his physical plant. In the early Sixties, when Anderson was at his strength peak, he weighed 370 lbs. at about 5'9". Built on an awesome height-weight scale, Anderson would have weighed roughly 460 lbs. if he was as tall as Bill Kazmaier. Simply stated, the man had great leverage.

He had short arms, good for benching; thick thighs and butt, perfect for squatting, and he had an enormous waistline, also good for squatting. His back was short, which afforded him fairly good leverage in the deadlift, even with his small hands and short arms. It was stated in Muscular Development magazine that no one possessed knee tendons as thick and large as Paul. From top to bottom, fore and aft, to knees, wrists, ankles and breadth of belly, Paul Anderson was well constructed for supporting massive poundages.

By all creditable accounts, Paul was a good athlete with explosiveness ala Jon Cone or Ken Patera. At a bodyweight of over 320 lbs. Anderson standing long-jumped over eight feet, and ran a sub five-second 40 yard dash. Like Kazmaier, he was an outstanding football player, running fullback at Furman while weighing 240 lbs. Talk about your average block of granite!

In fact, when Anderson began training for football, he found out on his first or second attempt at any exercise that he could outlift anyone. Strength fascinated him, just as the piano would if you found your brain possessed the faculty of a Mozart of Beethoven.

In 1951, after about six months of weight lifting, Anderson weighed 275 lbs. He was 19 years old, and had a 20" arm and 32" thigh. During this time he squatted 560 lbs. sans belt or wrap, and the photos indicate he was below parallel. According to the official statistics on such things, this was more than anyone had squatted with, ever.

He continued. In 1953 Anderson was done with football, giving strength and weightlifting his all. A freind convinced him to enter the Tenesse Olympic weightlifting championships, even though he had not practiced the lifts per se. Nonetheless, he did 275, 225, and 325. He also gave a squatting demonstration afterwards, making an unheard of lift of 660 lbs. Then, just eight months after starting the Olympic lifts, he clean & jerked 400 pounds!

In the spring of 1954, Anderson weighed over 300 lbs. At an exhibition with Bob Peoples in South Carolina, Paul squatted 700 lbs. Later in the year he tried 750, but missed, only because the weight rolled over his head. Although his training centered on squats, Paul began working the Olympic lifts in earnest with hopes of making the 1956 Olympic team for the USA. He started to improve rapidly. In the 1955 Senior Nationals in Cleveland, Ohio, Paul lifted 390 lbs. in the clean & jerk. Although he still was in the figurative shadow of the great Norb Schemansky, Ski was slowing with injuries.

Paul went on to win the 1955 World Weightlifting Championships in Moscow. In 1956, leading up to the Melbourne Olympic Games, Anderson stepped up his power training. This included heavy bench presses, half and quarter squats,and dumbbell presses. Going into the Games, he hoped to press and jerk around 440 lbs. and snatch 340-350, but just before the Games he got a horrendous flu which caused inner ear problems and severe weight loss. Nonetheless, Anderson held on to win, totaling just over 1100 lbs. He was fittingly announced to be the Word's Strongest Man. It was at these championships that Anderson became aware of his deep Christian faith.

At the tender age of 24, Anderson said goodbye to trophies and turned professional. He was lifting 1200 lbs. in the Olympic three and could squat with over 800. In 1957, Paul, weighing 335 pounds, broke both Louis Cyr's and Jack Walsh's back lift records, a lift which to this day remains unchallenged and listed by the Guiness Book of World Records as the greatest weight lifted by a human. Unless someone beats it, this lift ALONE establishes Anderson as the strongest man that ever lived.

During the years since 1956, until just recently, Anderson traveled about the country giving strength exhibitions and motivational seminars as a professional Christian strongman. In between shows he trained and ran his youth home in Georgia, which he still does today. It was during the early years after the 1956 Games, when Anderson did a short bit of professional wrestling that he lost his amateur status. This was most unfortunate, and a great loss to American sport.

From 1957 up to 1963 Paul pushed his bodyweight up to 370 lbs. and this is the period in which he did his most outstanding lifting. Unfortunately, none of Paul's lifts were ever performed in official powerlifting competition, which didn't really get going until a bit later. That fact doesn't negate his performances, which were observed by many honest, creditable people. Paul couldn't lift in a meet anyway, because powerlifting was under AAU auspices then and in their eyes he was clearly a professional.

Around 1962, Peary Rader and Armand Tanny were among several people who watched Anderson push-press 500 lbs. at Muscle Beach in California. Later, a young Pat Casey watched Anderson do 10 repetitions in the parallel squat with 800 lbs., all of which Pat insists were parallel. Rader noted that later Paul push-pressed 545 lbs. This feat has only been equaled by men like Ken Patera and the top Russian superheavyweight lifters who use speed and technique to get the weight up. Paul's move was considered to be stricter than the way most people pressed in the early Seventies!

Over the years various people claim to have seen Big Paul parallel squat with between 900 and 1100 lbs. Such reports are hard to localize and define, although pictures do exist of Anderson squatting 900 to parallel effortlessly. After all, anyone that can carry a full grown steer and lasso a runaway locomotive, as Anderson did in an early Rowan and Martin movie, has to be able to squat that much!!!

Powerlifters aren't necessarily skilled in the Olympic lifts, but a man such as Jon Cole or Bill Kazmaier, properly trained, might have lifted what Andy did in the Olympic three and Kazmaier, of course, benched and deadlifted more. I also believe Kazmaier could have push-pressed as much with proper training. Hechter, Moran and Kenady all squat comparably considering the differences in depth, but which lifter could do all of these lifts, without wraps and a belt, twenty years ago, and without steroids. Exactly zero, my friends, and that's what makes Paul Anderson so special.

Based on the best available evidence, I would estimate that Anderson could have officially totaled 2250 in the powerlifts back in 1964, his total consisting of a 900 squat, 600 bench and 780 deadlift. I'm of the opinion that, used over the period of 10 years, anabolic steroids add at least 25% to a person's ultimate total. All things considered, if he had so chosen to lift under the sports pharmacology doctrines of some of today's top lifters, Anderson would have totaled at least 2500-2600 lbs. I see no reason why, if Anderson had chosen to specialize on it, he couldn't have benched 700 lbs. before Williams and Arcidi. He had a better structure for it than anyone else.

I'll agree that this is very subjective becuase the fact of the matter is that Anderson's lifts are mostly unofficial and they'll stay that way forever. What you can't deny is that he did everything without any competition, any steroids, any helpful suits and wraps, and twenty years ago.

Dr. Fred Hatfield, who knows a thing or two about strength, says the following: "It's so hard to measure these things. for all-around strength, especially pressing and squatting, or in slow- speed movements, Anderson was clearly the strongest man, but he would have been hard pressed to win the strongman competitions for example, because of speed and structural limitations. Furthermore, I think, given the depth to which he squatted, Kenady, Hechter and Moran are his equal, discounting any effect of steroids or wraps, but then again that may be discounting an awful lot!"

Anderson, from my understanding, didn't do a lot of benching. It wasn't in vogue back then, so we cannot really say what he could have done. I doubt the 625 bench, only because he didn't practice it that much, although he certainly was well built for the bench. Training science is just so much better today. What would he have done today, under present conditions? A shitload of weight, that what! To me, asking whether he was the strongest man who ever lived is sort of like asking who was the greatest boxer of all time. Was it Dempsey, Louis, Marciano of Ali? We'll never know.