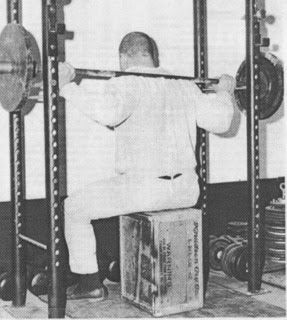 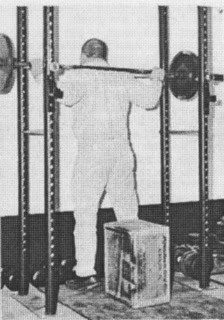 
The chrome steel bar drooping threateningly across the squat rack in Bill "Peanuts" West's Westside Barbell Club was loaded to 900 pounds. Bill himself had always subscribed to the belief that in order to lift heavy weights you had to get used to the feel of heavy weights. 900 pounds at the time was about 400 over his best official squat. All he wanted to do was take it off the rack and do a few partial movements. He was alone. But taking the bar off the rack on his shoulders and moving forward a few inches had never been difficult for him. As he stepped forward this time, his balance was off slightly and a wobble went through him which he easily corrected. Okay. But only okay for a brief moment before a strange thing happened. Another wave of imbalance went through him, coming from nowhere, stronger this time, and he fought it hard. Then the third one engulfed him, like giant ocean waves, made him stagger, and he went down, out of control, as iron plates cascaded all over the place.

It was an embarrassing day for Bill as they hoisted him into the glittering ambulance, rigid as a stick, his back out of whack, conscious mainly of what they were thinking, the neighbors (heh, heh). They had always expected this. He knew they were right. That's what made living in suburbia so much fun. The bizarre tragedies. Not the simple ones like alcoholism, infidelity, or embezzlement.

But the insurmountable Bill had developed a lot of toughness from his years of lifting and he came out of it with nothing more than a badly strained back. That was four years ago. Since then he has created not only a new National Squat Record of 582 in the 198-pound class but also a safe and convenient method of doing partial squats with a heavy weight through the use of his privately designed power rack.

From this mishap he learned one everlasting lesson, and that was never to take any more steps than necessary with a really heavy weight on the shoulders. A squat is simply what it means: feet flat on the floor, lowering to a position slightly below parallel, coming erect, then off with the weight. The body has too many moving parts to tolerate walking with a heavy weight. Bill recalled the way Paul Anderson trained. The big safes on each end of a two-and-a-half inch thick bar, the trench he stood in, the slight knee bends at first, later progressing to full squats, but never, never walking around with the big weight on his shoulders. If mighty Anderson could be careful, why couldn't he.

The body is like a big tuning fork when standing there with 900 pounds on the shoulders. The slightest tap will start it to vibrating, slow of course, like waves, and once that starts no amount of struggle can stop it. Down you go.

The weeks that Bill lay on his back recuperating, all kinds of iron bars cart-wheeled through his brain. He thought of the power rack used in training for the Olympic lifts, but it was incorrect for the heavy partial squats he wanted to do. The uprights were too close together, correct for weightlifters who pulled in a more straight up and down line. The bar didn't need much clearance. But the way Bill pictured it in his mind he wanted to do a box squat with the help of the power rack. The box squat required a lot of horizontal movement so he decided to widen the fore-and-aft distance between the two crossbars to 16 inches and lengthen by several inches the 1¼ inches between the circumferences. The uprights stand eight feet high.

His box is a milk crate beefed up with two-by-fours making it perfectly rigid and still fairly light. It is virtually indestructible. It stands 18-and-a-half 1½ to 2 inches above a parallel squat. This position seemed reasonable for a good bench squat. HIe could use a lot of weight now, much more than his limit squat. There is a great difference between this position and a position below parallel. Any point lower too nearly approaches the regular squat with a drastic weight reduction.

How could he do a bench squat without the crosspins interfering after the first rep? If he took it out of the rack by himself on the first rep, he had to start with the crosspins about seated shoulder height. On the second rep the bar would clang the pins before he had fully settled in the sitting position. The pins had to be placed below seated shoulder height. In this hunched starting position it was impossible to get started with an effective poundage. A spotter was necessary. Just one. Since his 900-pound fiasco Bill has taken 800 off the squat rack, walked backwards four feet, and made a partial squat on an 18-inch bench. He warily had three spotters standing by. But that was a waste of manpower. Using the power rack he needed only one man to assist since assistants are a necessary part of power training. Thus he developed what he calls the Assistant Box Squat Movement. From the sitting position the squatter hunches under the bar. An assistant standing behind bearhugs him under the arms and lifts him to an erect sitting position or even to a full standing position to get him started. The lifter is now on his own. He can assume a full sitting position without the bar touching the crosspins. When he completes the exercise, the spotter can help him lower the bar to the pins.

The whole point of the exercise is to start the lift from a full sitting position. Let the buttocks roll back, and in a continuous movement start forward and up again. You lose the effect if you don't settle into it all the way. If you only sit on the leg biceps, you get too much rebound from the muscle when it contracts. The spotter, as an added advantage, can help the lifter do forced reps by just touching the bar. Even where only a regular squat rack is available an assistant can help the lifter get started on box squats, but extremely heavy weights would not be recommended.

A lifting belt and a towel offers additional support. Tuck the towel under the belt for a more even support through the lower back and around the abdominals.

George Frenn, one of the nation's top hammer throwers and part of the group that trains at the Westside Barbell club, managed to do 5 forced reps on the box squat with 770 pounds with Bill West spotting. Bill said it was pure psychology, that he barely touched the bar.