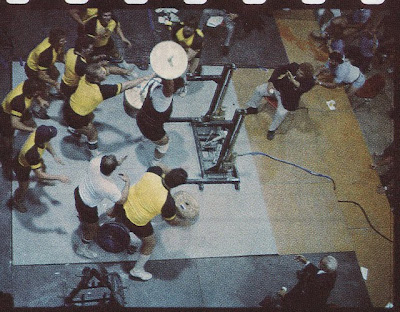 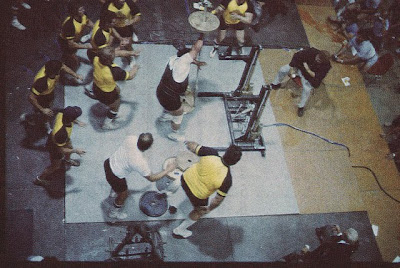 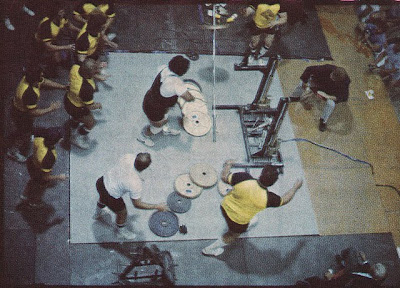 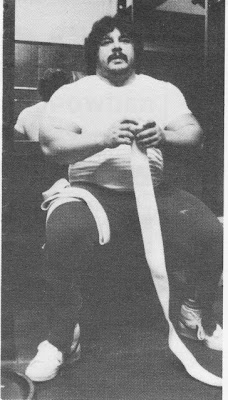 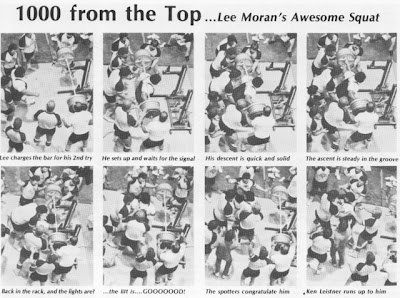 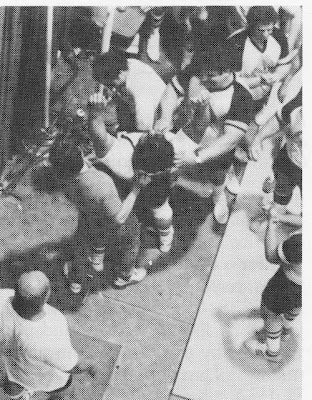 Let me tell you how he did it. It was at the 1984 Senior National Powerlifting Championships in Dayton, where the squatting duel of the century was to take place. Lee Moran, going head to head with Dave Waddington, the first man ever to squat 1,000 pounds. Dave made his historic lift back in June of 1981 at a local meet in Zanesville, Ohio. None of the officials were qualified to judge a world's record, so the Wadd's staggering feat never hit the record books.

Lee, it was rumored, was loaded for bear and hungry for the official title, the Sultan of Squat. The Wadd always hangs tough, though, and it promised to be a spectacle the likes of which the sports world had never witnessed before.

Waddington opened with an immense 942 pounds and missed it on depth. In fact he missed all his attempts on depth, even a third at 953, leaving the door wide open for Moran, if he was an enough to pass through the portal.

Moran backed out of the racks with the same weight Waddington had finished with, 953 pounds. The ponderous weight began to whip up and down, buckling Moran's body. The weight hit the floor with Lee not far behind, however, it decided to take a very ornery path to its resting place, over the top of Lee's skull, nearly ripping the skin off his head in the process.

Undaunted, and some thought outright deranged, the mighty Moran stepped back onstage to give it another try. Bar shaking, body buckling, crowd roaring, the bar was hoisted. Three white lights.

Time for the Big One, 1003 pounds! The bar now bent to its tolerance point across Lee's immense shoulders. He stood waiting for the referee's signal to "squat". Then it happened! All of the sudden plates were sailing through the air. Some from one side of the bar, then the other, causing spotters and officials to scatter for their very lives! With one side of the bar emptied, and the other now far heavier, the lopsided load snapped the bar about its axis over Lee's back like a hickory whip.

Was he dead? No, but witnesses will tell you that it's a miracle he survived intact, to say nothing of the folk standing in the immediate radius!

Of course, this was not Lee's fault. One of the collars had popped loose from the strain of over 1000 pounds. the officials gave Lee the opportunity to try the lift again. By this time the crowd, nearly 4000 strong, was screaming, sweating, and fairly out of their minds while encouraging Lee Moran to write his name in the record book for some time to come.

Maybe they wanted to see blood. It's a fair bet, knowing their disposition. More probably, they wanted to see history being made. They wanted to experience the moment of Lee's vicariously. feeling the crippling weight mashing their vertebral discs together so hard that a lesser man's would turn to bone meal.

Once again, Lee bent the inch-thick bar across his shoulders and set up for the referee's signal. He got the clap. The noise was deafening in the huge Municipal Convention Center as the crowd roared for Lee. Down he went, resting his prodigious trunk against his beer-keg thighs. Then he exploded, bar vibrating, muscles straining, blood gushing from his nostrils in a torrent. The Mighty Moran pushed himself into immortality. The thousand pound barrier was officially shattered forever.