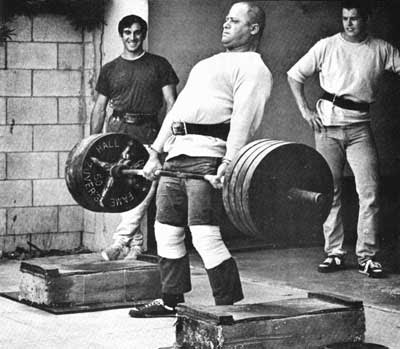 It was Bill West who, through a plethora of articles on the abovementioned techniques, his army of successful gym partners, and his famed Westside Barbell Club, made these techniques popular and basic necessities of power routines and part of almost every modern-day powerlifter’s program. Bill can truly be called the Godfather of Powerlifting.

Bill became interested in gaining size and strength in 1952 when he was 15½ years old. He became associated with Gene Wells who was then current Mr. Pennsylvania and lived near the young West. At the time Bill weighed only 87 pounds. He started training with Wells at John Fritshe’s Gym. Bill and Gene both dreamed about the famous Muscle Beach and Joy’s Muscle House by the Sea in Santa Monica, California.

So strong was this urge to migrate that Bill, with his friend, left for Santa Monica. West arrived in Los Angeles with $1.65 to his name. He purchases a bag of peanuts and a bus ticket for Santa Monica. Upon arriving he was given lodging by Fleurette Crettaz, also known as ‘Joy’ who ran a famous boarding house Called the Muscle House by the Sea. It was here that such greats as Steve Reeves, Jack Delinger and others stayed from time to time.

Bill’s training resumed as did his consumption of peanuts. He ate one pound of raw peanuts, ½ cup of peanut butter and six spoonfuls of peanut oil every day. His bodyweight rose from 87 to 102 pounds. In 60 more days his weight was up to 132; and at the end of the first year his weight had risen to 155. It was during this period that Joy stamped the name “Peanuts” onto Bill’s locker, giving him the nickname which he has carried to this day.

After his third year of weightlifting, Bill had risen to a bodyweight of 180. It the year 1955 and Bill started to compete in various lifting meets. He eventually posted Olympic lifts of a 260 press, 230 snatch and 315 clean & jerk; however, Bill felt that he didn’t have the proper physique nor the skills required for Olympic lifting and on the advice of Isaac Berger, he increased his bodyweight to 198 and pursued the three powerlifts.

Early in his powerlifting career Bill achieved a 355 incline press, a double dumbbell clean & press with 127 pounders, and seven reps with 130 pound dumbbells on the incline dumbbell press. He could also strict curl 175 pounds. Bill later rented a garage to be used as a training headquarters for himself and his friends. This garage had no electricity and was illuminated via candlelight. One evening when an auto accident drove all the members to the street, the Pacific sea breeze toppled over a candle and the garage was utterly consumed in the fire. It was then that Bill converted the garage behind his house at 4227 Neisho St. in Culver City, California to the legendary Westside Barbell Club.

Strong men from all over came to receive Bill’s expert knowledge and training advice. Among them were Pat Casey, the first man to bench press 600; Bill Thurber, American record holder in the bench press and total in the 148 lb. class; Leonard Ingro, the first middleweight to squat 500; hammer thrower Harold Connolly; shot-putter Dallas Long; and the immortal George Frenn, the first man to total 2100.

Under Bill West’s tutelage these strength stars made startling progress. Bill Thurber held American records in the squat, bench press and total in two weight classes; Leonard Ingro broke American records in the squat and total. George Frenn won the 1967 Senior Nationals and later broke myriads of records. Dallas Long won the 1960 Olympics in the shot put. Pat Casey went on to become the first man to squat 800 and total 2000. Another frequent visitor, Steve Merjanian, incline presses 500 lbs. on a 60-degree incline. The list goes on and on and the techniques used by the Westside Barbell Club did well for the master himself, Bill West. At about the same time of the great success of his gym mates, Bill was on a record breaking rampage himself.

In 1968 Bill squatted 600 in the Senior National championships for another record and became the first middle-heavyweight to squat 600. In 1970 Bill made his best official total ever with a 430 bench press, 6365 squat, and 615 deadlift for 1680. This total still ranks in the top 40 lifetime totals according to Powerlifting USA magazine. In personal correspondence with this author, Bill stated that he made unofficial totals at exhibitions of between 1775 and 1825 on various occasions. This total would rank 8th according to Powerlifting USA’s lifetime totals of the Feb. 1979 issue, and 13th of the top 100 of the more recent April 1981 issue.

The tremendous success of Bill and his friends and their revolutionary techniques did not go unnoticed. The famous bodybuilding entrepreneur, Joe Weider, realized Bill’s genius and from 1965 to approximately 1971, Bill wrote a series of articles in Joe’s magazine outlining the techniques that he popularized and that would later be used by virtually every powerlifter from then until the present day. Here is the impressive list of articles which revolutionized powerlifting:


1.) Dec. 1965 – Muscle Builder magazine – “The Touch System”
Bill told of how the touching of the hands on the lifter in all three powerlifts helps him psychologically and physically get used to heavier weights.

In 1966 Bill wrote the following articles in Muscle Builder Magazine:
2.) “The Bench Squat”
How to make attempts feel lighter by squatting on a high bench or box.

3.) “Triceps Power Cheats”
How to cheat on the triceps extension to produce higher poundages.

4.) “Powerlifting Aids”
This was the first written account on wrist wraps, elbow wraps, knee wraps, flat shoes for the squat an deadlift, wide part of the belt in front for the squat and sponge rubber pads on the chest for benching.

5.) “Incline Power Rack Presses”
How to properly use the power rack and incline press to isolate middle sticking points in the bench press.

6.) “The Extended Deadlift”
How to provide a greater range of motion in the deadlift by placing blocks under the feet.

7.) “The Touch System in Bench Pressing”
How to place the hands on the bench press bar which one’s partner is using to assist in a sticking point. This is now called forced reps.

8.) “Using the Touch System in the Deadlift”
How to make one’s deadlift feel lighter by using a physical assist from one’s partner.

10.) “Build Power With These Rack Deadlifts”
How to increase one’s deadlifting using the rack.

11.) “775-lb. Deadlift: How I Did It”
The deadlift training philosophy of Bill West and George Frenn.


This author defies any powerlifter to say he has never used at least one of these techniques at one time during his career. Practically all powerlifters today use a routine of power aid that was popularized by the great Bill West, the Godfather of Powerlifting. Bill’s genuine and unselfish interest in helping others has created a science that has lasted and prevailed even unto the present day, and a lengthy list of records by male and female lifters who have used his techniques. On behalf of every powerlifter who has ever broken a record, personal or otherwise, using techniques whose origins were unknown until now, t his author would like to extend thanks to Bill “Peanuts” West.