What Every Greenhorn Should Know, Part Two - Joseph Curtis Hise 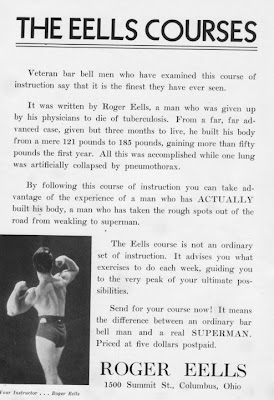 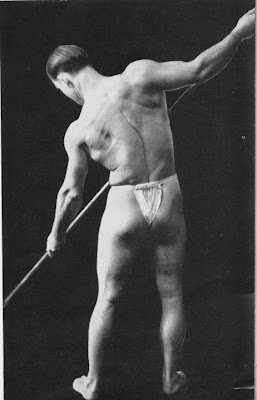 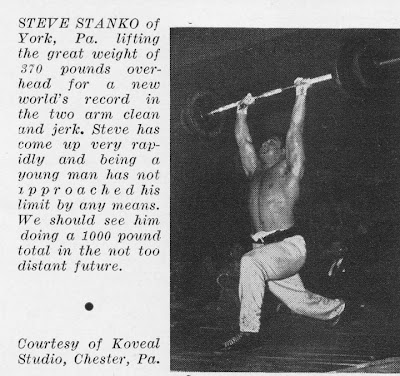 What Every Greenhorn Should Know, Part Two
by Joseph Curtis Hise (1940)

The advantages of early training are of great magnitude. it may change the youth's physique type from a very unfavorable specimen into an ordinary or fair specimen. Grimek changed his slow gaining type of carcass into a rapid gainer through persistent exercise from 18 to 21 years of age. 18 may be too late for the eelskin physique. He will, of course, gain great strength in proportion to bodyweight but his looks will be neither shapely nor massive. If his specimen can be started correctly as young as 14 he will change his type into a more shapely looker for the bystanders. If your skin is stringy looking and the small muscles show no sign of shapely curves . . . you will NEVER have a shapely physique unless you start extremely young. No adult has ever succeeded, although they may increase their chest 15 inches . . . none o their muscles have either CURVES or BULK and yet this type of flesh is the most superior of all in quality. What experts think about it is poor balm to a party who shows on the bathing beach. Ordinary people are the majority . . . experts are the minority!

A beginner's judgement of what constitutes proper physique grading is absolutely worthless. For instance, when I set out to stimulate the manly art of making man I sees the advertising catalog and picks out my champion. One Harry Paschall who is by no means unheard of in these days. He outweights "them days" maybe sixty-seventy pounds and if he looks at that picture now . . . or saw it entered in a contest he would rush out and and buy a demijohn to get rid of the bad dream. It was beyond my hereditary power to ever duplicate in looks Paschall in his more miniature days. So, Mr. Beginner, don't think that your former idols are going to park so high after three or four months experience and study on your part. Unless, of course, you choose some institution like Grimek.

If you are born to develop into a Clydesdale instead of a thoroughbred or Arabian . . . don't join the mob. In the eyes of an expert a Clydesdale is just as wonderful as a thoroughbred. Small wrist bones arer no bar to great size. The writers who prate otherwise are addled over getting the stringy fleshed, shapeless muscled type mixed with bone size. One of my friends totes a six and five/eighth inch wrist and has a chest close around fifty inches. It may be added that he never wasted much time to get it either . . . moreover, he had a six and one quarter inch wrist to start with.

The strongmen of the present day are by no means strong compared to the training methods that many of us know. Very few or our greats owe theirs to unfailing favorable environmental conditions over a long period of time. Those that have spent months or years at persistent exercising are usually the slow gaining type . . . although in many cases it comes from unbalanced exercise.

When one buys a set of bar bells the first thing he should do is bend the bar slightly in the center so that it is not straight . . . this is called cambering. Bar-bell manufacturers should never sell straight bars with their exercise sets. No one can lift record poundages on an exercise set and about 48 out of 50 cannot squat with a straight bar on their shoulders for the reason that the straight bar rolls up and down the skull, neck and backbone, and about the fifth rollover on a poor fellow's neck he swears off all squats and all hope of future improvement at the same time.

There is only one other exercise that is anywhere near the class of deep knee bends at 20 repetitions and has to be used as the last hope for those who donate their knee joints to Deal Old Siwash and are unable to set on their heels. This is the repetition Jerk from the shoulders. This is probably the exercise to which the great Austrian and German giants owed their size and strength. It takes far more energy than does the 20 rep squats and the gains are slower . . . but for a man who has donated his kneecaps to the alumni it is his last remaining hope. Perhaps, as has often happened, his exercising will bring his knee and elbow joints back to normal. The only cures I know of arer among the weight exercisers who turned to this form of exercise in hope of curing their trick joints. One of my friends ha a kneecap split in an auto accident and it took him two years of weight exercise before he could sit on his heels from a one-fourth squat to a full squat.

Almost every proselyting enthusiast for weights that I know was some form of cripple who would have never had improvement through any other means than the curative effects of weight exercising. These "renewed" cripples are the high powered apostles of aggression against the enfeebled humans who form the majority of every continent. The lazy strong philosophers give nothing but advice . . . but these "renewed" cripples force it down as many willing and unwilling throats as they can live to reach.

Good habits are an excellent investment. They pay heavy dividends with a healthy body in middle age and old age. Good care never hurt anyone and bad care has stunted, ruined and killed billions. The advantage of adopting good habits young is that it is one more thing you won't have to learn when it may be too late to do almost anything about it. A strong man may expend much time and energy on unpraised things and still not suffer because his biological power is far above those that go under at an early age from doing the same things. The strong men who are no saints re so few in nubmer that the exceptions are traditions instead of being quite common as among ordinary people. It seems miraculous to the bystander when they see some party who is the talk of the town,the pest of the sherrif and Don Juan of the morons, change in a few short weeks to become what his ex-anxious parents consider a model young man. The stronger and more intelligent a man becomes the more he prizes himself and the more care he takes of his present and future. Psychologists find that the more healthy and alert a person is the higher is his intelligence. Observers of college teams strongly doubt this. This is because intelligent students prize their kneecaps and elbow joints more than the cheers in the stadium. The exceptions who get the publicity and hardknocks never learn the value of good kneecaps and joints until almost thirty years too late. It is an unvarying rule that the duller a man is the more fearless and careless he is. He fears nothing and is willing to learn the same.

Only the wise prize their bodies. As a result, only the enlightened and easy to learn ever take up weights . . . if they have poor instruction they are most likely to never learn any better. If the beginner is properly started on the magic ten-twenty repetitions for beginners, if his diet is generous enough and his leisure is suitable, he will surely gain . . . some fast . . . some medium . . . some slow . . . but GAIN he will!

No beginner is competent to hastily adjudge that he is a "slow gainer" or "hopeless." Many change from one type to another and then back to the first type. As a rule, his "speed of growth" accelerates as he grows older.