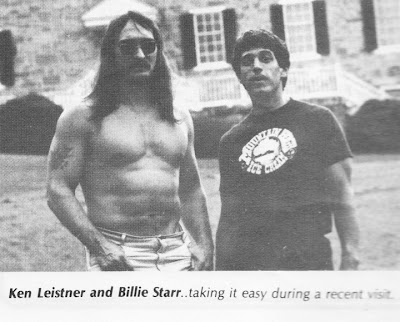 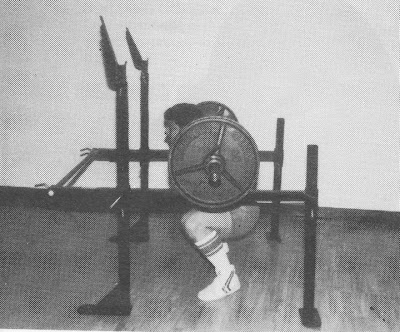 
As older followers of Powerlifting will recall, PL in the early 60’s was popularized by George Frenn of North Hollywood, Ca. Frenn has always been outspoken regarding his theories and their application.

Indeed, he has every reason to be, since his 2100 lb total (853 [actual weight] – 520 – 740) was years ahead of his time. There are some who may argue that there were excessive wraps – even ‘bed sheet technology’, used in the squat and that the depth was not what it should have been, and in the bench press the use of elbow wraps (a legality in those days) might give a rather distorted view of his total.

Regardless of these arguments, few can voice any doubt as to the authenticity of Frenn’s deadlifting and back power. The 775 he pulled was a record, and in addition, Frenn exhibited awesome displays of back power in Olympic lifting movements which enabled him to be a success in that field as well.

Oh, and let’s not forget that he was a bonafide Olympian, who for a time was the ranking hammer thrower in the United States and one of the tops in the world.

Reliable sources indicate to me that he still has the ability to throw better than 225 feet in the hammer and 42 plus in the weight throw (an event in which he still holds the world record!). His powerful back has enabled him to successfully bridge the three rather diverse worlds of powerlifting, Olympic lifting and weight throwing. I had a chance to speak with George at length about back training and here are some of the pertinent points of the interview.


PLUSA (Powerlifting USA magazine): George, from the years of experience that you have described, would you give your views on the deadlift.

FRENN: Basically, there should be one main philosophy behind deadlifting, something that I have shown countless times and that many of the other great lifters have shown. That is, the willingness to continually lift heavy weights. You have to mentally, emotionally train yourself to pull those big numbers, regardless of the time of year it is. A good analogy would be that you cannot train yourself to throw a 16-lb ball 230 feet until you can throw a 14 lb 230 feet. Peter Karpovich was very succinct in his theories – in order to get stronger, you have to lift progressively heavier weights.

PLUSA: Well, what about cycling – that seems to be the most logical approach towards peaking out and avoiding overtraining.

FRENN: From what I know about cycling, I personally don’t believe in it per se. Yes, of course, I realize that one can not (especially in the beginning stages of his career) lift max 100% weights every session – however, even a beginner can respond well to utilizing 85% of max for a certain number of reps. Cycling is fallacious to me because it seems that the environment controls the lifter – you have to control the environment. By building up a physical ‘bank’ of strength and emotion by simply doing the lift with heavier and heavier weights, one can always ‘peak’ for any given meet. For example, I entered (and won) the YMCA Nationals in 1976. Prior to the meet the very best that I had pulled in the deadlift was 585x5 reps. Yet by drawing on these reserves in my ‘bank’ I was able to pull a 765 that day.

PLUSA: Isn’t it true that you don’t do deadlifts that much as a part of your normal power schedule?

FRENN: You bet. If you perform religiously the following four exercises – power cleans, snatch-grip and clean-grip high pulls, and good mornings – your actual deadlifting can be limited to once every ten days. Then you should take a weight about 100-120 lbs less than your maximum and try to get 10 reps with it. I venture to guess that a fellow like John Kuc who can pull 870 plus can easily take around 730-745 and perform 10 solid reps with it. Hey, that in and of itself is one hell of a feat. As far as reps go in the assistance moves, 4-9 sets of 3-5 reps would do nicely.

Notice that the pulling movements give a great workout to all of the muscles involved in the deadlift. Also, lat pulldowns are an excellent finishing movement.

PLUSA: There are some who would concur with that theory, but I can see others who would disagree simply because of the lack of form work in the actual deadlift.

FRENN: I’m glad you mentioned form, because the form on the pulling movements, at least the start of the pull, is, or in my opinion should be, the SAME. That is, close stance, hands outside the knees, flat back and head up. That style helped me break out of the doldrums in the 660-670 range to where I was knocking on the door of 800 lbs. The rounded back move or humpback style throws too much of the pull on the upper back and arms, where the pull should be taken on by the logically stronger muscles – the hips and legs.

PLUSA: Older pictures of yourself have always shown that you used your normal lifting boots even when deadlifting. Any comments?

FRENN: Well, I had an ‘informal’ agreement with Jon Cole during those years when he and I were nip and tuck in our totals that we would not at any time change our lifting costume – so as to have a little uniformity between us when comparing totals – especially when they were done in separate locations. Actually, I believe that a good solid ¾ heel will help the initial leg drive. Hell, I cannot buy the fact that that much space would make any difference in the height of the pull.

PLUSA: Any comments about the Sumo-style deadlift?

FRENN: Forget it. You can print it exactly like that. Guys who use that are fooling themselves into thinking that they can build back power. Sooner or later their gains come to a grinding halt. I have the greatest amount of respect for guys who try to lift heavy, heavy weights with proper style. Take Waddington. Imagine what would have happened if he had slipped during his 1000 lb squat. Hell, powerlifters are literally taking their own lives into their hands. Guys who try to do this with less than 100% style are fooling themselves and will pay for it.

1.) The proper style (in Frenn’s opinion) is with the feet close, head and eyes up and with a flat back position. Reasoning – so that the hips and legs can bear the brunt of the pull, not the upper back and arms.

2.) Reps with heavy weights are the foundation to a long career of deadlifting heavy weights. Utilizing reps of 5-10 is optimal and n this way the lifter is building a sense of long-lasting power.

5.) You control the environment – NOT the other way around!

6.) Always allow at least eight days rest between your last deadlifting workout and the meet.