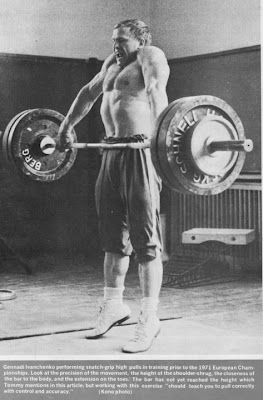 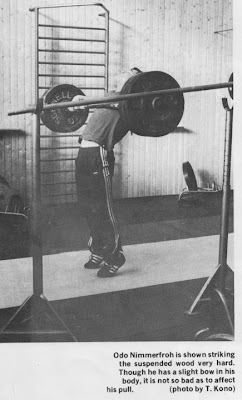 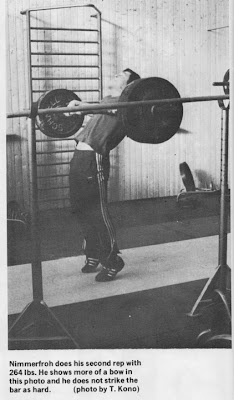 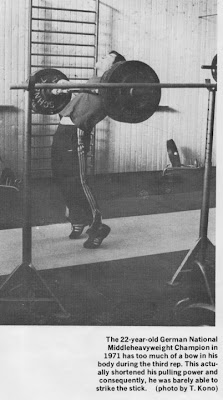 
Every lifter aspires to be a good snatcher just like every bodybuilder desires to possess large, shapely arms. The ability to snatch heavy poundage sets the lifter off more as an athlete for no other lift requires more balance, timing, speed, correct judging of space (height), flexibility and exactness.

The majority of lifters are quite efficient in the press and jerk lifts but because of poor technique in pulling they fail to lift impressive weights in the snatch.

Here is a simple test to perform in training which should give you an idea whether you are snatching in proportion to the power you have for pulling. Work up as heavy as you can in Power Cleaning but make sure you don’t go deeper than a quarter-squat to catch the weight on your chest. Don’t jump your feet apart sideways if possible and don’t use straps in performing this movement. Also, catch the bar at the chest while maintaining a flat back (no hunching). Whatever weight you can Power Clean in this manner you should be able to Snatch in competition; especially if you are a squat-style lifter.

Another simple method of checking to see if your snatching poundage is in proportion to your pulling power is by comparing the Snatch record in relation to the Clean & Jerk lift. If your Snatch is 80% of your best C & J record then you are using your pulling power efficiently for snatching. Of course, there is a possibility that you have very faulty technique in cleaning and this can give you a false index.

I have mentioned in previous ABC articles the importance of starting your pull correctly. We’ve also covered the Theory of Acceleration. In this short article I will explain an exercise which should be a boon to 95% of the “poor” snatchers. Working on this single exercise should teach you to pull correctly with control and accuracy. This, in turn, should help you correct many of the mistakes you make in performing the Snatch lift.

This exercise is the ordinary High Pull using the wide (Snatch) grip but with a little twist added, figuratively speaking, making this a truly effective exercise for developing the “feel” for the correct pulling technique.

In this exercise one of the most important points to remember is to determine the right height the bar must reach for the lifter to make a Snatch. To find this height, have your training partner or coach measure accurately the distance from the floor to the mid-point of your sternum bone while you are wearing your lifting shoes and while standing as tall as possible without going on your toes. Study the accompanying diagram for a better idea of how high this should be. For example, at my height of 5’7” (while wearing shoes) the exact mid-sternum height would be 52 inches high.

The next thing is to suspend a wooded stick approximately 4½ to 5 feet in length between a pair of adjustable squat stands so that the BOTTOM level of the stick measures exactly the height that is the mid-point of your sternum. By now, I believe you have an idea of what we are trying to accomplish.

The stands and stick should be located at ONE END of the bar so when you have performed the High Pull exercise with the correct weight you should be able to strike the stick, You can weigh down the stick on one end by sliding on a 2½ or 5 pound plate close to the squat stand. The other end of the stick will then be free to fly up when you strike the stick too hard with the bar.

Keep an accurate record of the maximum poundage you can use in this exercise and be able to strike the stick for 5 reps. Keep records of the various poundages and repetitions while using the normal (Snatch width) grip, hook grip and while using straps.

2.) It teaches you to start the pull with your legs while maintaining a flat back and straight arms. A lifter cannot explode at the start of the pull with a weight 90 to 100% of his best Snatch weight and expect to strike the stick for 3 reps because the lifter would dissipate all his pulling power at the beginning of his pull.

3.) It teaches you to control the output of your power so that the maximum pulling power comes smoothly. You cannot start the pull slowly and then explode at the knees if you only have two gears (slow and fast).

At the beginning when you first start using the suspended stick High Pull exercise it is essential that a training partner or a coach watch you from the side so he can see you extend your body. If you exaggerate this extending position you may actually be bowing your body, which shortens your height )and pull) instead of lengthening it. Some lifters try to throw their heads violently back and drive their hips too far forward to extend their body (see photo No. 3). This is just as bad as the lifter performing the High Pull and bringing his chest down to meet the bar.

Once the lifter gets the “feel” of extending his body instead of bowing or pulling his body down to meet the bar, he will feel the muscles of his deltoids and trapezius contracting vigorously at the end of the pull.

Study the accompanying photos very carefully. Photo one shows the lifter stretching his body and he is striking against the suspended wood very hard. He has a slight bow in his body but not so bad as to affect his pull. His second repetition is the second photo and he shows more of a bow and he is not striking the bar as hard. The third photo shows the third rep and you can see that there is too much of a bow in his body and he has actually shortened his pulling power by bowing too much. He was barely able to strike the stick with this pull.

A lightweight stick was struck for almost 1½ years with a Snatch record of 260 pounds. I had been trying to help him for the past two years correct his mistake of starting the pull too fast. One day I had him work on the suspended stick High Pulls. He found that he could strike the stick with the barbell loaded to 265 lbs. (using straps) only if he started to pull slowly and used the idea of acceleration. It was the first time in two years that he got the idea clearly that starting with a controlled pull meant a stronger pull. Anyway, in two weeks he officially snatched 265 lbs. Two weeks later he snatched this weight in an international competition.

You can adapt this suspended stick High Pull idea also to the Clean grip High Pulls but naturally in this case you’ll have to locate the lower level of the stick at your navel height.

If your pulling technique isn’t what it should be a month’s work on this suspended stick method of High Pulls should bring about a new personal Snatch record.

Give it a good try and see.