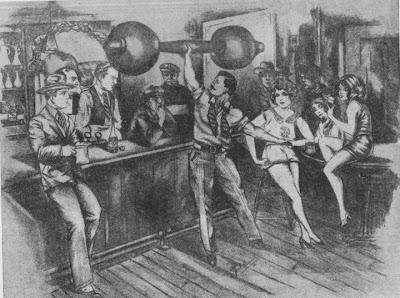 
Before the Olympic lifts became the standard of amateur weight lifters, as far as champion caliber is concerned, the One Arm Military Press was one of the main tests of one’s strength.

If an athlete could properly perform a one arm military with 90 lbs. he was considered strong regardless of what he could do on other lifts. All athletes of strength would try their ability at this almost forgotten lift, for it was a lift that could be practiced by all.

In performing the Two Arm Military Press today (which I have always called the Olympic Press) the athlete is allowed to spread his feet apart, but in the One Arm Military Press strict rules are still followed, and the lift is just what it is called – a press while at military attention.

There are two ways that the lift has been performed. The athlete could use his discretion regarding what to do with his free arm. He could keep it at the side of his left thigh (assuming that he is pressing with the right arm), or he could hold it out at right angles to the shoulder. The strictest way would be holding the arm at the thigh, for that would be more in keeping with “Military Attention.”

For record attempts a dumbell would always be used and the athlete would spread his feet just far enough to allow the weight to be straddled. He would then lean over, and in a rather quick clean pull the weigh to the shoulder, and almost at the same time snap his heels together and start getting his body braced for the lift. Here is where a little so-called “science” can be used.

The elbow is carried back a bit, the handle of the weight must be in line with the chin, and now the athlete can get his back rigid. He contracts his thighs, and at the same time his buttocks. This gives him stability and a firmness which the beginning does not realize is important in all overhead pressing. Here is where the lifter can use discretion as to how he wants to hold his free arm. If he holds it at the side he can, by pressing against his thigh and tensing his arm, give himself rigidness. He can also get almost the same effect by keeping his arm at right angles to the shoulder, and tense his upper back, by pressing it in a downward motion. All this is done by the experienced One Arm Military presser, but it is not apparent. It is just about all the “science” there is to the lift. Eyes are kept looking straight ahead. Some lifters will keep the palm of the hand facing them throughout the lift, while others may turn it just the least bit toward the front, which is also permissible, and may be of some help. Now the weight is slowly but steadily pressed over the head, without the body swaying front, back, left or right.

There are three more very important factors in improving this lift. They are:
Practice.
Practice.
More Practice.

One should start by using a weight that can be done five times. The fifth press should feel as though it is your limit, if you were doing just one lift. The weight should be increased to a point where only four presses can be done, and so on, until you have reached your limit to the point of performing one press.

This routine is only for the One Arm Military Press proper. Other exercises should be done in your regular routine to assist in strengthening your arm, shoulder, and sides:

1.) The regular One Arm Press exercise is invaluable, and should be performed up to fifteen repetitions, to get the most out of development. All deltoid exercises should be practiced as the deltoids play a most important part in this lift.

2.) Using weights that allow for fifteen repetitions (you can work this up to fifteen from a start of ten), hold the weights at the side of the body, with straight arms, raise them out sideways to the height of the head, then lower slowly to starting position.

3.) Now holding the weights at the front of your thighs, with the knuckles up and straight arms, alternate raising them forward overhead and then back to the thighs.

This is a most valuable exercise for the development of the deltoids. Naturally your one arm pressing will require and develop strong triceps, and they should be given plenty of work. If you can do handbalancing, that should be a regular part of your training, particularly hand stand push-ups. Many lifters who excel at pressing have used this exercise.

Sandow has performed 121 pounds in the One Arm Military Press. Saxon has done 127, but I believe he could do much more. I understand that the weight he used was a barbell, and it was one that the Saxon Trio used in their act. Saxon would sometimes ‘warm up’ backstage by one arm military pressing this weight. It was done very impromptu. Since Saxon never cared much about any other record save the Bent Press, he gave his record out as 127 lbs. This he did many, many times, and I have been informed on several occasions that he could quite easily One Arm Military Press this weight three times in succession.

John Grimek has done a One Arm Military Press here at my gymnasium with a 120 lb. barbell three times in succession. He just took his coat off and said, “Watch this, Klein,” and he pressed the first two reps as perfect as possible and then leaned the slightest bit sideways on his third press. It was the best pressing I have ever seen as far as sheer strength of this type is concerned.

Walter Podolak has often military pressed a solid 100 lb. dumbell five times in succession, here at the gym. Jack Kent has done 108 lbs. John Garon has done 100 lbs. These lifters all range in weight from 165 to 210 lbs. I have performed this lift officially with 98 lbs. while at a bodyweight of 146 lbs.

There was a lifter by the name of Meyer who press 145 lbs. in this style: While performing at the circus he would be tied to a post, from ankle to chest, leaving only his right arm free. He would then be handed the 145 lb. dumbell and would then proceed to press it in so-called military style. Naturally he could not do this much free from the post, but the general public thought that he could do much more if he was ‘free’. This was, of course, exactly the impression he wanted to create.

I think that the One Arm Military Press is still one of the best tests of strength, and should be practiced by all lifters. Remember to do it with the left arm as well as the right, even though you may not be able to handle as much weight this way.