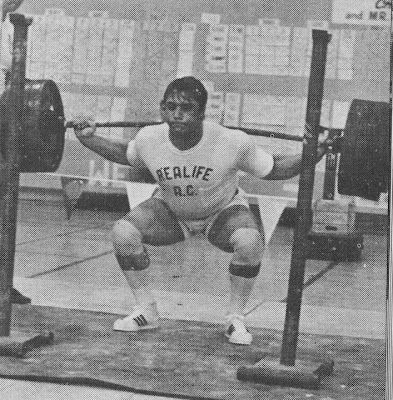 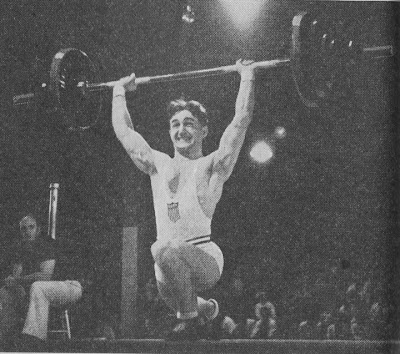 Chapter Four:
How to Do It – A Programme for Action


In the preceding chapter we have shown you, mostly through simple explanations, the best arm and shoulder specialization exercises. One might think the best way to get powerful arms would be to make up a schedule of these twenty movements and go through them daily. Nothing could be further from the truth. Men with perfect arms have learned that too many exercises are just as harmful as too few. And daily exertion is not the way to solid development.

It is true that many top physique stars have used hard daily workouts for a couple of weeks preceding a contest to gain muscular separation, but just as many more have found that this arduous daily toil results in staleness, lack of tone, and even smaller measurements. You will find the daily exercise boys among those who are synthetic strongmen; fellows who simply MUST work out every day because they fear that a lost workout will result in a loss of a quarter inch on their biceps. The pure “muscle-spinners” are in this class. Solid musclemen, like Grimek, need only one or two workouts a week to maintain full size and contour.

This is not to say there is not a place in a specialization programme for daily workouts. Sometimes a short “blitz” schedule may make use of a few exercises and daily work, but over the long haul, the best results will come from thrice-a-week workouts. Through tests with many pupils we have also come to the conclusion that full rest periods about every six weeks are very helpful to continuous progress. There is no profit in going stale.

We believe that it takes real hard work to build bigger arms, but we also see no good reason for becoming slaves to exercise. Three- and four-hour workouts are all right for professionals, but the average chap has to work for a living, and he has only so much energy. Weight training will add to this energy quotient if properly used. If abused, it cannot fail to do harm instead of good. We conclude that six hours per week is enough exercise for the average man, and is sufficient to give him physical perfection. So our schedules will be based on three two-hour workouts weekly, with at least one day’s rest between each session.

Another thing: a great many fellows rush headlong into certain specialization programmes without thought to the body as a whole. Thus, they defeat their purpose. There must be harmonious growth of the whole physique, and unless certain basic exercises are included in even a limited schedule the results will not be worthwhile. We always include one powerful overall exercise in any specialization programme – usually the breathing squat. And we also include some chest-shaping exercises in between our arm routines. The best breathing exercise we know is the one given in our book “Muscle Moulding” which is done without weight resistance.
SEE HERE -
http://www.sandowplus.co.uk/Competition/Paschall/paschall.htm

Several pupils have told us, upon following this type of arm specialization, that their chests have grown several inches, much to their surprise. That is the very reason we include such movements. You cannot get big arms without getting a big chest, too. The two go together like fish and chips. Rock and roll. Sex and drugs. Belief and repetition. The best thing about using a good rousing set of squats at the start of an arm programme is its effect upon the whole bodily metabolism. The body knows it has been working, and demands nourishment for growth. It makes better use of the food you eat, and the arm and shoulder exercises you do in addition to the squat thus find Mother Nature in a good mood to promote growth.

Another reason many pupils fail to get the desired results from specialization training is because they fail to make use of weight training’s most important principle – that of gradual progression. Too many think they merely need to do four, five, or six sets of ten repetitions each of the curl or press, and presto – eighteen inch arms! They try to FORCE the muscles instead of coaxing them. In our own workouts we have always tried to give interest to training by making each succeeding exercise session a little harder than the last. Sometimes we are only able to squeeze out one more repetition on a certain movement – perhaps we are able to add five pounds to the bar – but always we try to show progress. The effect of this on the mind is important, for the mental side of this muscle building business is just as productive as the physical. When using this progressive principle you will naturally come to a point where more weight and more reps are manifestly impractical, and it is then when you should stop and rest for a week and then begin with a different schedule and somewhat reduced weights.

In shaping the muscles, we must not overlook the value of muscle control. The greats of the game have been men who devoted a lot of time to mental massage of the muscle groups. Sandow, Grimek, Klein, Park, and all the other outstanding stars have learned to flex, flick and ripple every muscle band in the arm simply by thinking about it. This mental control has a very beneficial effect on the very shape of the muscles. The biceps themselves learn to leap higher at the word of command. It is well to rest the arms between exercises by flexing them, waving them loosely, making the muscles ebb and flow, ebb and flow, ebb and flow. You can also add to the effectiveness of certain “cramp” movements by exerting this mental control to fully flex the muscle while using a weight. Old-timers like Max Sick and Otto Arco carried this mental control to such peaks of efficiency that their arms were tremendous when measured in the flexed position. Arco had 17-in. biceps when weighing about 140 lb. A point worth remembering, however, is that these short men had superlative all-round development, without a single weak link in the chain. They were just as strong as they looked.

It is beneficial, too, to apply physical massage to the muscles after you use them vigorously. Between exercise, rub, knead and gently pinch the muscles you have been using. This helps to loosen them, allows the fatigue poisons to be carried away, and is an easy way to look like a complete goof in any public gymnasium on any continent. When using the set system, this is not only beneficial, it is almost imperative if the muscles are to be able to do their sets without complete fatigue. And remember, a goofy and carefree demeanor may save you much disappointment later on, around the time you realize that contrary to the popular posturing known commonly as purpose, nothing really mattered or had meaning in the slightest. However,

If you have ever had occasion to watch a celebrated muscleman in action, you may have noticed how often he rests. Indeed, in a two-hour workout, the star spends a good three-quarters of the time lounging around. He will do one set of ten curls, sit down, relax, perhaps even lie down for perhaps two or three minutes. Then he approaches the bar and does another set. He rests again before doing a final set. It may take him 30 seconds to do 10 reps – and he will rest at least 120 seconds between sets. He does this with all his exercises. This is the best way for the average man to approach his training. Don’t rush through it. Work hard when you are actually doing an exercise, but always rest long enough between movements to give your heart and lungs time to return to normal. Some people recuperate faster than others. For one, a minute is long enough between sets. For another, three minutes may be desirable. We have found it wise to sprinkle through our own workouts about ten sessions of forced breathing of from 10 to 20 breaths, holding on to squat rack and forcing the hands down, as in the “Bosco” breathing movement. This has the effect of returning respiration and pulse to normal much faster than if we merely rest, or do nothing. And besides, it is building the chest and getting valuable oxygen into the bloodstream.

Now let us turn to consideration of actual programmes. The three suggested routines following are intended to be used for six weeks each, with one week of full rest between programmes.


The amount of weight to use in these exercises must be left to individual selection. But it is important that you keep adding to the weight each week. This means, naturally, that you should start off with a weight quite easy to handle for the full number of sets and reps. Then, each exercise day, try to add a single rep as you go along, until the beginning of the next week when you add 1¼ lbs. to single arm exercises, and 2½ lbs. to two-hand movements. If you have no discs as small as 1¼ lbs. try to keep on making rep increases for two weeks and add 2½ and 5 lb. weights each fortnight.

After your week of complete rest on the seventh week, begin again with weights very comfortable to handle.