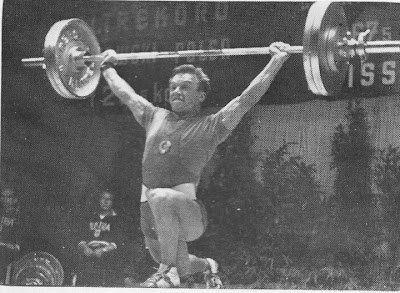 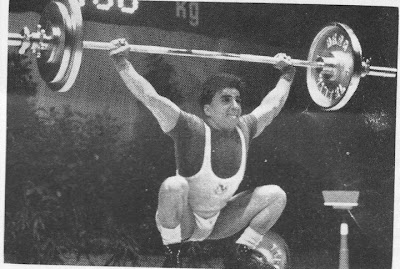 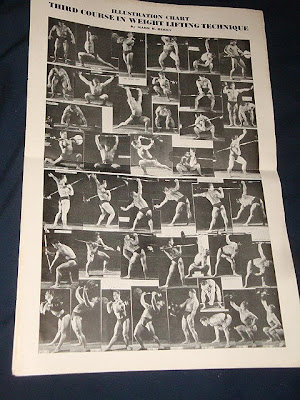 
When first commencing specialization on the three Olympic lifts the first problem to overcome is the correct adaptation of style and technique in each of these lifts. Every individual possesses a slightly different proportion in one or several major areas of his or her body.

Some individuals are gifted with shoulder leverage that is ideally suited to pressing. Others, although lacking in the proportion and leverage of the natural presser, are physically adapted to the quick lifts, cleaning and snatching. Poetically speaking, al mortals are not unlike snowflakes, each one, in some manner, slightly different from the other.

This condition also exists psychologically and it is my intention to elaborate on this very interesting subject in a future article. Let me stress again this all important point. Nothing can retard training progress or the eventual competitive proficiency of a weightlifter more than the adaptation of a lifting style, when first concentrating on the Olympic lifts, that is physically unsuited.

I am speaking from practical experience, for I have coached many weightlifters, both the beginner and the advanced, during my career. One of the first things that I discovered was that it is far easier to promote gains instructing the rank beginner, who has never had the chance to acquire a faulty technique or an improper style, than repair or eliminate faults established by a so-called “experienced weightlifter.” In the case of the trained lifter, muscle habit patterns have been established. In other words, a movement takes place automatically and during a heavy clean of snatch the lifter has little or no control over the muscles so involved. It is an extremely difficult task to break a faulty habit in lifting technique when such a habit has existed for a lengthy period of time. Many experienced lifters refuse to even attempt to alter their style and technique to bring about an improvement because, for even a short time, their efficiency when attempting a maximum poundage would be impaired. Other lifters, when faced with the tedious task of radically changing their style, “throw in the towel” and give up training entirely, or lift competitively in a half-hearted manner. What a waste of otherwise fine athletes.

Not only is it difficult to radically alter the uninitiated lifter’s technique or style, it is, in the majority of cases, even more difficult to convince such a lifter of the absolute need for this change. Stubbornness is often the handmaiden of youth and to quote an old adage, “We get old too soon, and smart too late.” I might also add, that in the case of an athlete, time is of the essence, as youthfulness will ever remain integral to the sport of weightlifting.


There are two basic styles used in the performance of the Olympic lifts. Split style and Squat style. Each method has advantages and disadvantages. For example, when utilizing the split method of snatching, and the bar is elevated over the head to an off-balance position whilst the lifter is still in the deep split body position, the fault (in the majority of cases) can be corrected by shifting the body underneath the bar. When squat snatching and the situation of an unbalanced bar occurs it is extremely difficult, often impossible, to correct the fault, as the ability to shift the body is greatly minimized due to restriction of movement and difficulty of balance.

Conversely, when employing the squat style of lifting there is less movement of the body involved, thus it becomes easier and quicker to position the body under the bar. Getting oneself under the bar, incidentally, is the very essence of Olympic Lifting.

Generally speaking, a short legged individual is adapted to the squat style of cleaning or snatching, provided that such an individual possesses a sense of balance. Most short armed men are good pressers and those with shorter than average underpinnings, above normal squatters. We can draw the conclusion that men with short legs have strong legs due to superior leverage. Logically then, would not the men with short legs make ideal squat style lifters?

When first attempting to squat clean there is usually difficulty positioning the bar correctly across the front of the shoulders. This is mainly caused by the lack of flexibility of the wrists. This stiffness will disappear in a short time, provided that the clean movement is practiced regularly. Large biceps muscles can be a hindrance when squat cleaning, but I believe that this condition has been exaggerated by those who are unwilling to persevere and endure this discomfort until flexibility in the area of the elbows and wrists is achieved. When assuming the low squat position to receive the bar at the shoulders, it is imperative that the upper body be as erect as possible. If this is not done the bar cannot be properly fixed at the shoulders and is either lost forward entirely or extreme difficulty is encountered re-fixing the bar correctly on the front of the shoulders. If a bar is improperly cleaned (shouldered) the chances of succeeding with the jerk are minimized because of fatigue.

I have mentioned these points so that a person, who through necessity must alter his lifting style, will not become discouraged if situations such as I have described arise.

I am convinced that eventually the highest poundages lifted will be cleaned and snatched with a squat style, and this applies to all weight classes. The possibility of exceptionally heavy weights being jerked with a squat style must also be examined. There are some who will disagree with this belief. The proof is in the pudding, and, to date, the highest poundages clean & jerked in the heavyweight division have been accomplished with the utilization of the squat style.

By this I do not mean that everyone should immediately change to squat cleaning or snatching. There are many who have a greater potential if the split style is mastered and adhered to.

An individual who possesses longer than average legs will experience less difficulty arising from the extreme low position of a heavy clean or snatch performed in the split style. In the case of the clean & jerk, many a squat style lifter has managed to shoulder and stand erect with the bar. Unfortunately only half the lift has been performed. I use the word unfortunate because many times I have witnessed a lifter shoulder a bar in the squat style and arise with it only after undergoing maximum physical exertion. True – admiration is due to the fighting spirit of such an athlete but, alas, this individual is so fatigued that the bar hardly leaves the shoulders when the attempt is made to elevate it overhead. In some cases no attempt to jerk the weight is made at all. This event, I imagine, must prove rather embarrassing to the lifter.

Another idiosyncrasy of aspiring weightlifters is to constantly change their style from squat to split or vice versa when the style currently used fails to produce satisfactory gains. In most cases the cessation of gains can be traced to muscular or psychological staleness or faulty technique in the lifts practiced.

The aspiring lifter or the beginner, after reading this article may ask himself, “How do I know whether the lifting style I am using is right for me?”

My advice to a person who poses such a question is this: carefully study all the material regarding weightlifting you can lay your hands on and, if possible, consult either a recognized authority on weightlifting, or a weightlifter who has proven himself and thus has recognized records to back up his statements.