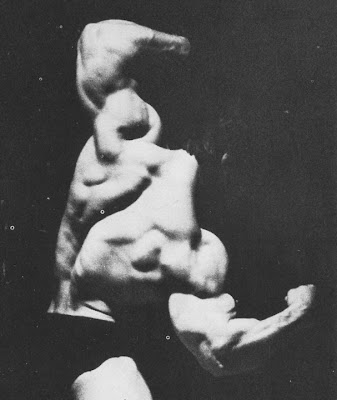 I wish that I could state boldly that this book is written by the “World’s Foremost Authority on Physical Culture”, but I am afraid to make such a categorical statement. After all, I have only been a student of body building and weight lifting for forty years. A lifetime is not long enough to learn all there is to know about this vital subject.

So I shall merely say that the contents of this book represent what one man has learned through close association with the leading men of muscle, through practical, realistic shoulder-to-shoulder workouts in the world’s leading training centers. The impractical methods have been weeded out, and this brief work gives you the gist of accepted practices of the present day. I believe firmly that anyone who puts this information to practical use will be able to develop strong, shapely and perfectly muscled arms and shoulders.

It may be of some small comfort to other muscleheads to know that the author is still as much in love with bar-bells and dumb-bells as he was forty years ago, and still uses them regularly and happily.

On the beach at Cape May several years ago we watched an incident so typical it might have occurred anywhere in the world. A family group was enjoying the salt surf and sunshine, and papa was, like so many others, a camera fan. He trained the lens on each member of the family in turn, and finally focused on ten-year old Junior. The youngster immediately assumed the arms-cocked-at-right-angles muscle pose familiar to Strongmen for generations, and tensed biceps almost as big as oysters. “Look at me, Pop,” he shouted, “I’m Superman!”

It is so natural to think of the upper arms when one mentions the word “muscle” that it must almost be instinctive. As kids in the school yard, we remember gathering around the most athletic schoolboy and asking him to “Let us feel your muscle.” We never thought of feeling the vastus externus, the latissimus dorsi, or the pectoralis major – no siree, Bob – it was always the biceps. Powerfully developed arms remain, through the years, the hallmark of the strength champion, and it is logical that the average physical culturist devotes a great deal of thought and time to the culture of the arms.

The very first training book I bought as a fourteen-year old boy was entitled “Strong Arms and Shoulders”. In forty years I have come full circle. Instead of reading about lumpy arms, I am writing about them myself, and I hope to show you that I have learned something of the subject in the ensuing four decades.

Fortunately, it is impossible to develop the deltoid muscles to their full power and beauty without also exercising the arms thoroughly, so the possessor of broad, rounded, muscular shoulders is invariably fitted with well-developed arms as well. The opposite is also true; it is possible to build bulky arms without an appropriately larger shoulder development – so it is important that the seeker of perfection approach the subject from the proper angle. Remember – shoulders first; arms second.

Let me tell you a little inside story, not generally known, which brings out the truth of the axiom above. Back in 1949, at the Mr. USA physique competition in California, among dozens of contestants there were three outstanding, world-famous bodybuilders: John Grimek, Clancy Ross and Steve Reeves. The latter two were then at the zenith of their powers, and each had been strongly touted as possible winners. Reeves, as a matter of fact, in that year won the Mr. Universe award in London. When posing, under the spotlight, all three men showed tremendous muscular bulk and separation, and presented a problem to the very capable judges. The contest was decided very simply. Backstage the officials observed the men walking about in a relaxed condition – so strutting, no flexion. In repose the full roundness of the incomparable Grimek shoulders was so convincing that all doubt was instantly removed. The only serious question then rose: who would be rated second and who third? This is what caused the long discussion among the judges at that contest, which was commented at great length upon in some of the muscle magazines. Shoulders had won over biceps.

Nature can be trusted as the most efficient of all muscle “carpenters”; she always builds up the proper muscle structure when the body makes the right and natural demand. Well-rounded deltoids are not an accident; they emphasize arm development because of the shortening effect they give the upper arm. The sweep of the Grimek deltoid adds much to the muscular bulk of his biceps. You simply cannot have a perfect arm unless the deltoid is developed, too, because the shoulder is necessary to give power to the arm. The best lifters are noted for shoulder development. You may say, at the point, “who cares about deltoids – what I want is an eighteen-inch biceps.” The point I would like to make is that an eighteen-inch arm (providing you can get it) without comparable deltoid development will not look as big as a sixteen-inch arm biceps which has proper shoulder muscles to go with it.

In carefully considering the impressive points of the male physique, the average judge’s eyes will start at the top. the breadth of the shoulders receives careful consideration before any other part of the body receives attention. In my own experience as a contest judge, I have eliminated many men from the competition at this very first glance because their deltoid development did not measure up to championship calibre. And, again, many other men who did not possess comparable development below the shoulders have been given a chance in the contest because of outstanding shoulders.

What do we look for in the perfect male physique? Certainly our first consideration must be given to that part of their muscular equipment which accentuates maleness. We do not look for the soft curves of the female; we regard with horror the current tendency to over-development of the male pectoral muscles. We do not want broad hips. We look instinctively for wide shoulders; the V-taper from armpits to waist; the swelling outward curve of the thighs and an adequate muscular calf development. And of all these things, powerful shoulders count first.

These little book is intended as a specialized treatise on the arms and shoulders, but we believe all specialization must be considered in the light of the whole physique; each part must be a harmonious portion of the whole. We might interject at this point a bit of advice to the serious bodybuilder. Your chances as a competitor will be greatly enhanced if you constantly check your standard against that of the officials who will judge you. If you have good development in three key places, you improve your position. These three parts are: the shoulders – the V taper formed by the latissimus dorsi of the back – and outstanding calf development. Three equally important drawbacks to the perfect physique should also be eliminated: Under-development of the deltoids in comparison with the arms – an unsightly over-development of both latissimus and pectorals (particularly the pectorals) – and ungainly thigh and hip development (particularly the sagging inner thigh muscles just above the knee).

Having now issued my official warning, after the manner of an arresting officer (“anything you say may be used against you”), let us return to the real meat of this volume – the development of the arms and shoulders. Can everybody secure an eighteen-inch arm? This depends largely upon the individual, for throughout the world there are no two men alike in their potentials. The small man has a smaller potential than the six-footer, naturally. Anyone under 5’ 6” who develops sixteen-and-a-half-inch arms will look just as good as the fix-footer who has 18”. Yet many men around 5’ 6” have developed 18” arms. We offer Roy Hilligenn (Mr. America 1951) as an example. John Grimek stands 5’ 8½” and has full 18” arms. The largest shapely muscular arms of which we have record were those of Louis Uni (Apollon), who possessed over 20” biceps with matching deltoids. Our old training partner, John McWilliams, got his arms up to well over 20”. McWilliams is a strong six feet, and Apollon stood about 6’ 4”. We would conclude that anybody with fair bone structure and leverage who stands 5’ 7” or taller has a potential of 18” arms.

Structure has quite a bit to do with arm development. We have always thought that John Grimek had the ideal muscular leverage, and that this accident of birth gave him a great advantage in attaining his position as the best-developed man of his era. The length of the upper-arm bones in relation to those of the forearm makes the difference between a good “natural” presser and a poor one. Further, the point of insertion of the biceps and brachialis in the bones of the forearm determine whether or not a man will be a “natural” curler. Actually, the poorer your leverage, the greater your potentialities for muscular development to compensate for it.

We have watched many new men come into the gymnasium and start on a standard course of barbell exercise. Some of these men grew like weeds in a garden; their biceps immediately took on shape and size, completely filling the upper arm with a ball-like lump of muscle. Others, using exactly the same exercise, failed to get such development. Why? The reason was the difference in arm leverage. We have also noticed that every individual arm has a slightly different shape. Some have full, thick biceps which crowd the joint, and others have a hump close to the shoulder and a long low space several inches in length at the insertion in the elbow. All anyone can do is to fully develop the type of arm which he possesses.

We are constitutionally allergic to long, dry-as-dust anatomical discussions about bones, muscles and sinews, so now, let us turn to a consideration of ways and means to develop these muscles.