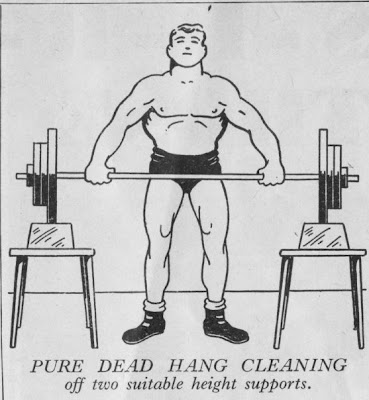 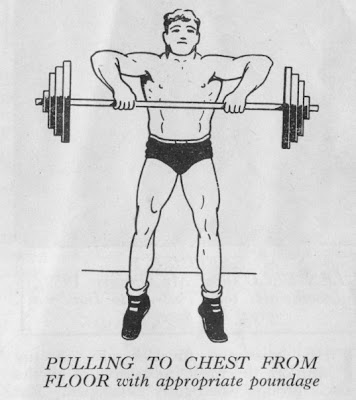 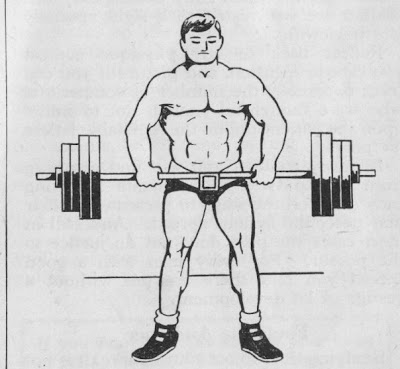 Pulling Power for the Snatch and Jerk
by Jim Halliday (1959)

The Two Hands Snatch is a favorite movement of mine, naturally, because it was the one I was most efficient on. In dealing with the lifts, you will find there is some repetition of former writings, and this is intentional. I feel that these points cannot be emphasized too often, such is their importance.

Whether you use a squat or a split style, there are certain basic principles that apply and must be adhered to, no matter what eventual modifications your physique and temperament cause you to enforce.

In the first instance, the back must be kept flat, and under no circumstances must the pull be made from any other position. Two reasons for this: In the first place, it is the strongest position; secondly, deviation from it could lead to severe strain.

This means that the legs must be bent when adopting the commencing position, and the more they are bent (providing that a comfortable attitude is taken and the legs are not too constricted), the better it is. A really low position not only ensures that the back is flat, it also enables full use of the legs to be made in the initial drive – which is of course of great importance.

The next definite need is that the bar should be guided into as near a straight line as possible. Naturally, a straight line is the shortest distance between two points, and the shorter distance you have to take the weight, the easier it must be. The flat back is responsible for this in the first place, but if you commence to straighten the legs BEFORE pulling the weight you defeat the object.

From this low position the first part of the lift is comparable to a vicious “dead” lift and the arms do not bend until the bar is well past the thighs. Additional points in keeping the bar moving in a direct line are to keep the head in line with the body until the “second pull” begins; and when this does occur, to use the shoulders fully in the action, instead of confining it to an arms’ movement as often happens.

Using the arms only obviously causes the whole of the weight to be taken by them, and this in turn compels the lifter to make a positional change which alters the course of the bar. This is the reason for weights going forward! If the pull is made by arms and shoulders combined – the true line of movement will be preserved and a better pull ensue.

These two factors – the initial position for the pull, and the direction of the pull once the action takes place – are the ruling points in this lift and determine the final result in every instance.

For power-building on this lift, the same procedure again is adopted. If you wish to improve the lift throughout, you eliminate the factor of splitting or squatting and do a direct pull from the floor to overhead, using the exact method as laid down for the orthodox movement. You commence in similar fashion and carry the movement through (including the rise on toes to lengthen the pull), concluding with as little a “press out” as possible.

To assist in strengthening of the initial pull, you use a slightly heavier weight and pull up to around chest height taking care to observe that the rules laid down for the lift proper are adhered to, and the weight is not allowed to go forward. This often is the tendency when repetition work is being done in this fashion.

If your need is to improve the “second pull” you eliminate the assistance of the leg drive by raising the weights to the dead-hang position (this can be done by having the weight on a rack or boxes) and without any prior leg-bend or concluding split or squat, again pull the weight to arms’ length overhead with your normal snatch grip.


To improve the depth of the split or squat, this movement can again be used; and with a slightly heavier poundage being employed, the lift is concluded in proper fashion and a low position enforced. The short pull makes this essential, and the comparatively low poundage enables recovery to be made safely.

The first part of this movement is similar to the Snatch, except that it is of a shorter range, but whilst basically the action is the same, some slight alterations can add to the lifter’s performance.

Again the low position with perfectly flat back, but this time with the heels together (toes about 30 degrees apart). From here the pull (once more a vicious leg drive to commence) must be made with the idea of keeping the bar in direct line and getting it as high as possible by this initial effort.

Because of the higher weight, the bar will be moving much more slowly, and as one cannot increase the speed of the split or squat, great effort must be made to in holding the bar at maximum height to allow the change in body position to take place effectively. This is done by trying to enhance the pull (even when it is impossible to pull higher), thus maintaining it in its position for a brief period, and giving that little extra time for the legs to move.

As the weight comes to the shoulders, the elbows are raised and the head is taken back to help in holding the bar in this final position. In lifting – as in hand-balancing – the head can be used to help in adjusting the body position, and great consideration should be given to this.


How the Jerk Should Begin

The Jerk should begin with the body upright, the elbows raised slightly, the head set back and the feet slightly apart. The first action is a slight dip of the legs (I recommend a rise on the toes in this action) with a quick re-flexing of the legs to get the bar moving in an upward direction. This should impel the bar to a head-high position, and a very strong “push-out” is immediately enforced, with the legs again being split in orthodox fashion.

As the bar arrives in position, the head is thrust forward to supplement the back.

The power movements for the clean are similar, aside from grip position, to the ones for snatching. To assist in a complete pull to the shoulders, the exact procedure for a clean proper is complied with, except that no foot movement at all takes place.


To improve the “first pull” the weight is placed higher and the bar pulled waist high. To help in this, a belt can be designed and worn, and the bar taken on to it, as in the first stage of the Continental Jerk.

For aid to the “second pull” and to assist in promoting a deep split or squat, the clean from boxes or rack can be used, with the necessary regard to poundages being given according to the motive behind the movement.

For the Jerk itself there is no better power-builder than to do the lift without a split. Use the initial dip and leg drive, but enforce a more powerful arms’ movement to conclude, instead of just relying on leg work alone to take the weight to the final finishing position.

The quotes enclosing the terms “first pull” and “second pull” are there because I do not consider such terms entirely appropriate. I feel the whole action is one combined effort, and the fact of breaking it up (necessary for purpose of instruction) could be misleading unless this fact was understood.

N.B. All the “assistance exercises” described were first devised by W. A. Pullum many years ago.