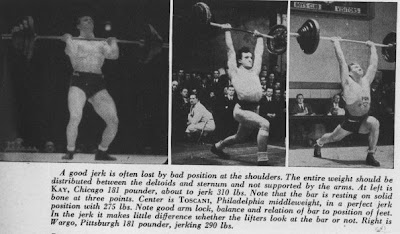 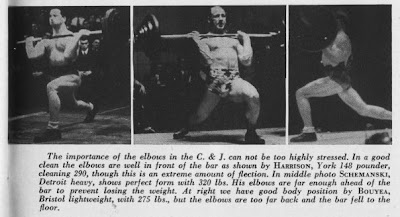 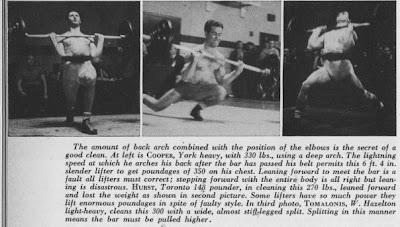 The more things change, the more they are the same. So goes the saying. No matter what evolves (or devolves) in the weight game. I note that since the 1940s the same problems keep arising. One of the most prevalent problems is overtraining. People keep on doing it, and it keeps holding them back.

Overtraining is not the same as training too hard. In fact, I'm not sure it's possible to train too hard, but it's easy to train too much. If you're overtraining, you're wasting a lot of time and energy and you're in for serious disappointment.

No one develops muscle and strength while working out. Working out breaks down muscle tissue-- growth comes later, following rest. During training, however, your body goes into high gear. Blood is forced into the working muscles, giving the illusion of immediate, often dramatic, gains. But you don't gain during training. Please stop conning yourself into thinking that you do and, as a result, trailing way too much.

The best workout is the hardest, not the longest. In my opinion, the ceiling on workout time should be two hours. Many, if not most, people will do just fine with an hour in the gym, and hardly anyone ever needs to go over 75 to 90 minutes.

A good, basic session should train the entire body thoroughly and well. In some cases a single set of a given exercise is enough. I personally believe that three sets are plenty. Keep adding weight, not exercises, to your program. Use strict form. Train at a vigorous pace.

I know, I know I'm old-fashioned. I'm oversupplying. I'm not aware of all the great "advances" in training. Yeah, sure. If you want to make real, solid gains, try it my way. You'll be delighted with the results.

Question: I find that I can follow a routine for four weeks, but then I go stale and can't continue to push myself. What am I doing wrong?

Answer: Probably nothing. You may just work best on on four-week cycles. If you aren't making the strength and size gains you like that may indicate something needs changing, but there's nothing wrong with a four-week cycle.

If you aren't happy with your development, try altering the amount of weight you're adding. It's possible you're pushing too hard and adding too much weight too soon. Let's say you use the military press as your basic pressing movement and you want to get up to two sets of six reps with 125 pounds. When you start, you can handle 100 pounds,. Instead of adding five to 10 pounds each week, try just adding 2 1/2 pounds. Give your body time to build Sometimes people burn out because their enthusiasm for a new schedule pushes them info going for too much too soon.

I want to stress, however, that if you're happy with your results on a four-week cycle, don't let anyone tell you that you've got a problem.

Question: I'm worried that I am not be able to do justice to a full-body workout of five sets of 10 exercises. If I work each one really hard - to the max - I'm dead by the time my workout's over. If I ease up, I feel I'm not training hard enough. What should I do?

Answer: Ten exercises for five sets each is too much! I'm amazed you could lift your hand to write a letter. You're doing almost double the amount of work you require. Drop your sets back to two per movement and forget about maxing out at every session - once a week is plenty for that.

After doing two sets for a couple of months to let yourself recover from past excesses, go ahead and do three sets. Do not, however, go beyond that as long as you're doing 10 exercises.

Question: I've been training for about eight months now, and I wonder how you feel about my forgetting the planned programs and just going by instinct?

Answer: I do believe in instinctive training but only for those who have years of experience. There's always a danger, even for highly experienced trainees, that discipline won't be as great when you don't have set goals and a definite program to follow. Having a progressive plan and making yourself follow it is usually he most effective approach to training.

I've tried both approaches, I prefer the results I get when I follow a plan, and I've been training since 1963. I suggest that you stick to using a carefully mapped-out, written plan for at least another couple of years.

Question: Is it ever beneficial to train for long periods on light routines?

Answer: You bet it is! There's a tremendous health and conditioning benefit to doing light work. It gives your body and mind a break without your stopping training altogether.

I wouldn't recommend it for beginners, that is people with less than 1 1/2 to two years' training under their belts. If, however, you've developed pretty close to your full hereditary potential, it can be very useful.

I've always believed that the best all-around training is done with both barbells and dumbbells. If you want to train light for a while, though, an all-dumbbell routine can be superb. I've seen such schedules renew enthusiasm for training, add enjoyment and help generate motivation for heavier training later.

You can do some interesting movements with light dumbbells - dumbbell swings, compound arm and shoulder work and one-arm dumbbell presses. A set of good cables can be valuable for light training too. Be flexible when you put together a light routine. I'm sure you'll find your light schedule will prime you for your heavy schedule.

Again, everybody, train. Don't overtrain. I'm serious when I say that overtraining holds people back. Don't let it happen to you.