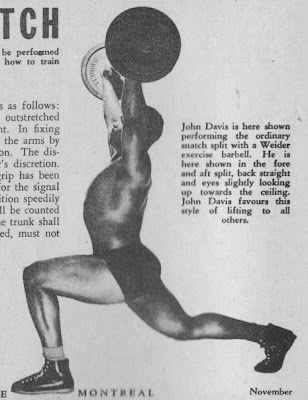 The new definition of the Two Hands Snatch reads as follows: “The barbell shall be taken from the ground to outstretched arms’ length overhead in one continuous movement. In fixing the bell the legs may be bent to any extent, but to lock the arms by an obvious push shall be counted cause for disqualification. The distance between the hands shall be a matter for the lifter’s discretion. But they may not move or slide along the bar once a grip has been taken. In the recovery to the erect position in readiness for the signal of approval, care must be taken in resuming the erect position speedily in a continuous movement. Any delay in the recovery will be counted cause for disqualification. At the conclusion of the lift the trunk shall be erect with the legs firmly braced and feet, if separated, must not be placed wider apart than 15 ¾ inches and held firmly until the referee has given the sharp clap with both hands.”

It sounds quite simple, doesn’t it? It is quite simple! As with the press, the differences between the old and the new definition are not nearly so important nor so confusing as may be imagined. But they are vitally important differences nevertheless.

If you are unable to understand the new Press and decide to play it safe by continuing to lift in the old “British” style, you will not lose much ground; the next man, by taking full advantage of the laxity permitted, will not gain more than 10 to 15 pounds.

If, however, you decide to do the same with the snatch, you are likely to experience a shock, for the man who does understand the definition of the lift and who takes advantage may possibly confront you with a style of lifting that may not seem to bear any resemblance to the snatch movement, and, what is more important, he may lift an extra thirty pounds by means of it!

The first difference, recovery, is not of great importance. If you are at all a stylist you will have no difficulty in adjusting your performance to a definition which requires the finishing position to be assumed without delay and you should certainly not drop in your poundage because of it.

The really important difference is that which applies to the spacing of the hands on the bar. Formerly the hands could not be placed wider apart than “dumbell supporting” distance; now their placing is a matter of the “lifter’s discretion.” And it is the latitude permitted in this respect which opens up such astonishing possibilities – which permits a lifter, if he is clever enough, to handle heavy poundages in a style which is really not a snatch movement at all!

Under a new definition you may still, of course, employ the old “British” style of snatching in which the arms are kept at approximately shoulder-width apart and in which the feet are split directly fore and aft. Whether the ultimate possibilities of this style of snatching are quite so great as others which are now permissible is, perhaps, a debatable point/ but some of the greatest exponents of the lift in the world still use it and it is beyond question, the most easily learned and least risky of all.

The other possible styles may be briefly tabulated as follows:

1.) The wide grip, fore and aft split, style. In this style of snatching the bar is grasped about mid-way between shoulder-width and maximum distance; wide enough, in other words, to allow the broad-shouldered lifter plenty of “space” but not so wide as to limit the power of pull. The feet, in this case, are split in the usual manner. (The ordinary snatch-split)

2.) The wide grip, half squat, style. Here the bar is grasped in the same fashion but instead of a fore and aft split a half squat is employed. (Half-squat wide grip)

3.) The maximum grip, full squat, style. This is the style of snatching which, to most American lifters, seems altogether grotesque when first seen. But it is now a permissible style and as some of the world-record holders employ it, there is no reason why those Americans who can master it should not also use it.

The bar, in this case, is grasped in such a way that the hands are as wide apart as possible. The feet do not move but as soon as the first effort has been made a full squat is employed and the head is thrown well forward so that the bell is delicately balanced upon arms which are almost at dislocation point. (Full squat and wide grip – head forward)

4.) The wide grip, fore and aft split, bent back style. This style of snatching will be new to American lifters. So far as I know there are very few lifters of front rank class who can successfully employ it, but Ronald Walker now uses it and if he can smash the world’s heavyweight record upon it, it is obviously a style with possibilities.

The grip, in this particular style, is wide but not maximum. The pull is the same as in the old “American” style and the feet are also split fore and aft. But instead of keeping the body erect throughout the movement, the lifter bends backward from the waist to facilitate fixing, and very often a weight which would normally fall forward can be taken, in this manner, to arms’ length.

Sometimes the fixing of the bell in this style is very slow, slow enough for nine British referees out of ten to declare that a push had taken place. The continentals, however, do not take the same view; their interpretation of a “push” is a little different from ours and they admit this style of snatching without hesitation. (Split, wide grip, bent back style)

Here then are the five different methods of snatching, only one of which was permissible a few weeks ago. Which, you may ask, should a lifter adopt to achieve the highest poundages? I can only advise you to experiment.

If one particular style was definitely superior to the rest for every type of lifter there would be no alternatives to choose from; every lifter would employ the same. But one style is not superior to another for every type, as a little investigation will prove.

Tony Terlazzo, the phenomenal American Lightweight who recently smashed several world records, still uses the “American” fore and aft style. His teammate Bob Mitchell, former holder of the world’s record in the lightweight class, employs a full squat. Ismayr, the German middleweight employs a half squat; Ronald Walker, the world’s greatest exponent of the snatch, splits fore and aft and bends back to fix the bell.

There are, you see, possibilities of world-record performances in every style. All that can be said is that the fore and aft split is the safest method of using the feet and that the maximum grip, full squat style is the ugliest form of snatching. But when that is said there is nothing more to say.

If you prefer to stick to the old “British” style you may do so secure in the knowledge that other lifters employ it and can break world’s records by means of it; but a far safer thing to do would be to experiment with all the different styles so that you can be quite sure that you are doing the best for yourself. If you decide to do this, experiment with all the styles, do so thoroughly, for none of them are easy to acquire and, even if one of them happens to suit you, you will not register sensational improvement in a night.

Experimentation with the wide grip, fore and aft split style should not be difficult. You will find it easier if you widen your grip by small stages so that the process takes at least a week and you will also save yourself a lot of trouble if you use chalk or tape to mark the bar. You should discover whether this style suits you in less than a month.

The wide grip, half-squat style is more difficult to master but it has this advantage; it is a necessary preliminary to the full squat style. Start by practicing the lift with light weights from the hang. Endeavor to lower the body by bending the knees, but keep the trunk more or less upright and don’t move the feet at all.

In order to hold even a light poundage you will have to cultivate an immediate recovery so that the legs are no sooner bent and the weight fixed than you commence to come up. Keep at this for a month or two before you make up your mind as to its suitability.

The maximum grip, full squat style is merely an exaggeration of this movement. Grip the bell with the hands as wide apart as possible and concentrate upon a short, fierce upward and backward pull. As soon as the bell has commenced to travel the legs must be bent and the upper body thrust forward from the waist.

The bell will reach arms’ length in a remarkably, a first even disconcertingly, short space of time, and the locking point will find the bell carried well to the rear and the head thrust as far forward as possible. Don’t forget this forward inclination of the head when you try the lift, or the balance will be upset and the bell will pass backwards out of control. And don’t forget that the pull must be directly towards the rear or the bell will reach arms’ length and then drop forward.

The bent back style of snatching is the most difficult to learn and I warn you that it needs a back of super strength and mobility to stand up to it. The bell is pulled in the ordinary way, the feet split fore and aft. As the bell passes the eyes, the head is bent back to allow the eyes to follow its progress; and the fixing of the bell on locked arms is achieved by bending the back while watching the bar.

Before you can decide whether this style is suited to you, you will have to spend several months practicing it. You must practice it with light and heavy weights and its final test –and for that matter the final test of all the styles – must be whether it enables you to lift more weight.

During the past four months I have seen lifters achieve amazing results on every one of the styles mentioned. I have seen fresh records established by means of the old “American” style and good performances put up by exponents of the half squat theory. I say again, therefore, you must experiment and continue to experiment before you or anyone else can tell which style offers you the most.