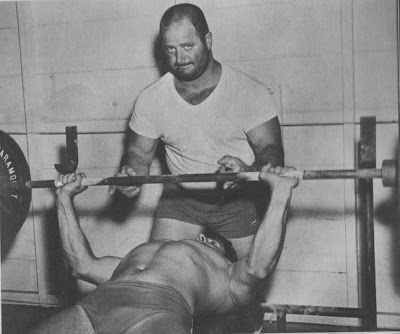 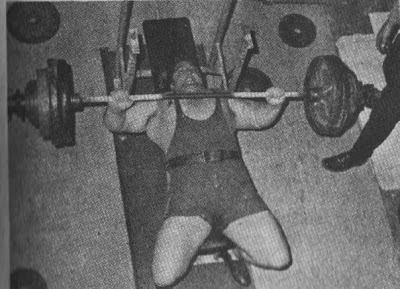 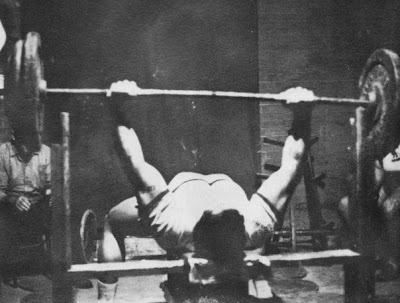 The Touch System in Bench Pressing
by Bill “Peanuts” West

In a previous article I described the Touch System in power squat training. Largely psychological in nature this bright new method proved you could improve your squatting ability by up to 10% in a few workouts. Essentially the method amounts to a spotter touching the hips of the lifter while he is coming out of the deep squat position. The whole idea was to give the lifter a sense of security and thereby free his mind to aim its attention at making the lift uncluttered by doubts and fears.

The success of this method is a matter of record: Middleweight Leonard Ingro’s squat of 500, my mid-heavyweight 600 and Pat Casey’s official 775 lbs.

For the past few months we have been practicing the Touch System on the bench press. It seemed only natural that what could work for the squat could also work for the bench press. We thought about it for a while, and tried different things like touching the elbows or the triceps, or spotting the ends of the bar, but nothing worked quite as effectively, gave the mind such overwhelming confidence, as the presence of a muscular hand visibly working its sorcery on the bar by barely touching it.

The first thing we learned was that the Touch System was ineffective on the bench press when the lifter used a weight he could not start from his chest by himself. A sense of defeat is promptly established when the weight is too heavy to budge. The positive approach must prevail. The bar must be off the chest at a point where the mind is firing a massive volley of impulses to the muscles in the attempt to pass the sticking point. There is a moment of truth where the bar is about five inches off the chest, where the simple touch of a finger under the middle of the bar acts in some magic way to keep the bar raising to arms’ length. Of course, there is a good deal more to it than that. For one thing, it doesn’t work for two strangers. The people using this system must know each other – their strong points, weak points, sticking points and idiosyncrasies. An almost symbiotic relationship exists. It gets to where a simple command, “Go, Baby!” in the middle of a lift means everything in the world. A nod, a word a touch – they all mean something. How do they get that way? By training together, by having a common purpose. They depend on each other. And more, they’ve got to have that feel of a heavy weight oozing out to arms’ length, regularly, a compulsive effort that by another expression means they are “hooked.”

How and when do you use this Touch System? Okay, let’s start out with an arbitrary bench press routine:

In this routine the touch is used only for the six heavy singles. As the weight rises and reaches a point about five inches from the chest, the spotter places a finger under the bar and guides the bar to arms’ length. While the man pressing is still fresh, the mere presence of the finger under the bar psyches him into making the lift, but as the singles add up, he normally weakens, and toward he end of the series the finger may actually be exerting an upward force on the bar, barely enough to prevent a failure. In this way the lifter doesn’t get the feeling, unconsciously, that he must conserve on the first three singles in order to make the last three. This permits him to use 405 for singles instead of five or ten pounds less. I like to give the lifter the impression that he is really being helped, and grasp the bar with a full overhand grip, but my touch is deliberate as my hand rides the bar up. More likely, the calluses of my palms are barely grazing the bar.

The Touch System has side effects, too. That is, if the bench presser has the tendency to lift unevenly, a finger placed under the bar on the lagging side acts as a sort of corrective therapy. Where lag is excessive, however, better to use less weight.

A recently developed training procedure, immediately following the six Touch System singles, is one where 100 lbs. are shaved from the bar, and a set of 10 strict bench presses are done without any assistance of any kind. The object is to build up to 3 sets of 10 with that weight. With 100 lbs. less than the heavy singles the first set of 10 would usually be within one’s capability. If you are really putting out, you will probably make only 5 or 6 reps on the second set. Stop there. Don’t try a third set. That ends the flat bench presses for the day. Try it again the next bench workout. When you finally make 3 sets of 10, advance the weight and start over again. In this way you are setting up a continual contest with yourself. Remember to take a full rest between sets, 5 to 7 minutes, so that you are producing maximum effort on each set. Between this and the Touch System you will have two contests going on the bench press right along. Obviously these high reps make for good bodybuilding as well. When you stop to think about it, the three power lifts are the three most basic bodybuilding exercises.

By the time you are making 3 sets of 10, let’s say with 295 following the six Tough System singles, you would probably be able to do 10 reps with 50 lbs. more, 345, with dead stops, from a fresh start. Try it on occasion. It makes a nice personal record, 10 reps with a maximum weight, fresh, and it gives you something further to shoot for.

The bench press as modern day powerlifters do it demands more than what meets the eye. The movement of the bar from the chest to arms’ length is filled with power exchanges. Can you imagine how pokey it would be to air mail a letter if it was carried from the mail box to the airport by pony express? The speed of the airplane would be nullified by the lag of the nag. The same with the bench press. The initial thrust is carried by the triceps. The delts and pecs cannot exert full power on their own at the start. The solution – sectional development. Build the triceps. Therefore, following regular bench press movements, which ended in this case with 295, drop the weight to about 225 and do 3 sets of 10 reps of close grip bench presses. This exercise will give initial thrust, exactly what you need to get the bar high enough so that the Touch System can be used. Jim Hamilton, 250, did close grip bench presses almost exclusively for months to favor a pec injury, and when he returned to the regular grip found that his bench had shot up near 500, better than ever. Casey and Frenn practice also use this movement regularly.

Diverting briefly here, the tremendous possibilities in using the Touch System on the Squat should be mentioned as well. The following is an arbitrary schedule to show this system can be incorporated into a weekly squat training program:

You will notice the difference in the amount of weight between Tuesday’s full regular squat and Saturday’s Touch System full squat. The 475 is beyond the lifter’s ability to do free squats, but with assistance on each rep he can do 3 sets of 10 reps. This demands a close alliance between the two men. The assistant stands directly behind the squatter and grasps the bar with both hands. As the squatter begins to come out of the bottom position, the assistant applies the aid. His hands never leave the bar till the squatter is again erect. With perfect timing the assistant learns to give a slight tug at the perfect moment in coming out of the bottom position, allowing the lifter to build momentum and pass the sticking point.