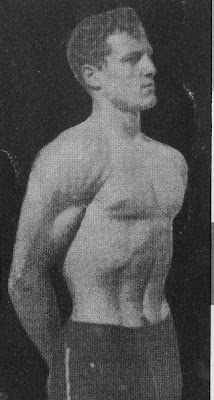 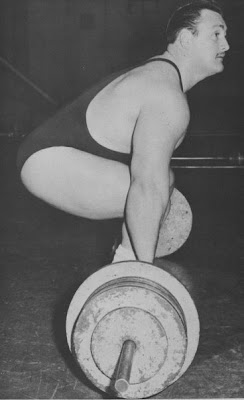 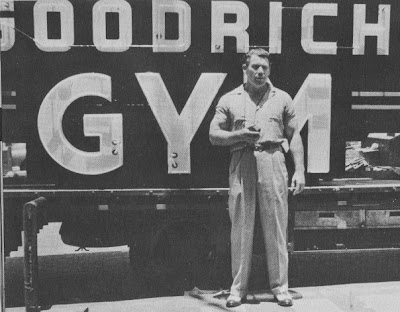 Very seldom do you see a weight trained man with no development of the trapezius, due to the fact that they aid in practically every exercise. Every time you lift a barbell or dumbell from the floor or carry it from one place to another the traps are brought into play. Their contraction is the force that resists the downward pressure of a weight being held in the hand at arms’ length by the side. They keep your shoulders from dropping out of place when you carry a bride across the threshold. They are very powerful muscles when developed and are forever present on each and every strong man. Flat, square shoulders are an indication of this strength.

Even though it is practically impossible to perform a barbell or dumbell exercise while standing without working the trapezius, I would like to explain two or three in particular I practice and find affect the trapezius quite directly.

The Shrugging Exercise has always been popular and is one of the most direct and effective exercises for the traps. To properly perform this exercise stand erect and hold a barbell at arms’ length across your thighs. Hold the knuckles forward. Keep the shoulders slightly forward, then raise them as high toward the ears as you can. Holding them in the raised position, force them as far back as you can. Lower, then raise to the back, then force them as far forward as you can. Use a very light weight until you learn and feel the motion.

The next exercise is certainly a well known movement and is performed by all weightlifters, but to my knowledge it is seldom practiced as an exercise by body builders. The Dead Hang Clean is a very good movement for developing the trapezius and deserves a part in every enthusiastic body builder’s program. There are those who have failed to include this very important exercise in their workouts because they consider it to be an exercise for weightlifters only, and fail to realize its merits as a body building movement. There are no exercises that bring the traps into play more vigorously than cleaning and pressing, jerking, as well snatching. It is my sincere advice to you who lack development in the traps and upper back to include the three lifts in sets of 8 to 10 reps. The Dead Hang Clean can be done with either barbells or dumbells. Take the same weight with which you perform your military presses. A greater demand is made upon the trapezius if the first pull in the clean is started from knee height rather than from the floor as usual. This eliminates a fast start with the aid of the back and forces a more direct pull on the traps. Do not squat or split in order to get under the weight. Pull it high each time.

It must be remembered that the traps pull the shoulders back as well as up in a shrugging motion. Therefore, I consider Barbell Rowing a very effective exercise for developing the lower trapezius. I have also found that the lateral raise bending forward has also proved satisfactory. The barbell rowing motion can best be performed by standing with the feet wide apart, legs straight, and the back bent over and parallel to the floor. From this position slowly pull the barbell to your chest without bending your knees. Straighten your back as the bar comes in contact with your chest and pull your shoulders back as far as possible. Begin with a grip the width of your shoulders. As you improve in this exercise widen the space of your hand grip. Keep your elbows pointed directly out.