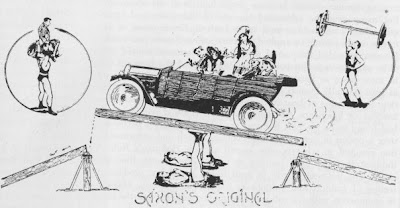 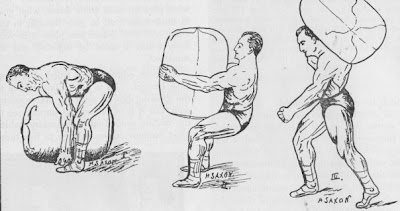 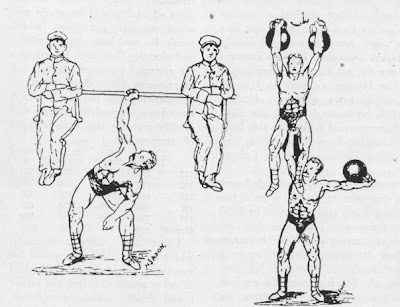 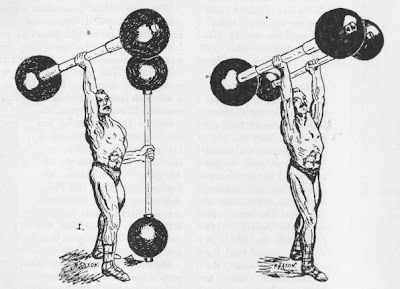 ONE
Our most sensational circus stunt was the car supporting feat in 1908 with the Hengler’s Circus in . It proved to be a remarkable drawing card. The original bridge was shorter, but we eventually worked up to a bridge 69 feet long. The bridge was supported in different ways, with one man at each end and later with heavier weights and both men supporting, side by side in the middle of the circus arena. First a bicycle with rider crossed, then a horse with rider, and finally a heavy motor car with up to ten passengers. Because the crossing vehicles were in motion the shifting weight caused terrific strain on the supporters and made the act most dangerous for us as performers. By that time the strongman business reached the point where it took sensationalism to mark a really first class act. This feat provided our personal brand of sensation. From , we went to , and on the 13th of March, 1908, the bridge collapsed, severely injuring Arthur and myself. Arthur was out of action for almost a year as a result of this misfortune. As soon as my broken bones knit and I was able to get around again, Hermann and myself performed the motor car feat again. We never knew what was to come when performing this type of stunt because of all the danger involved, for in such circumstances a broken neck was just as possible as a broken arm of leg. But we were young and adventurous in those days, and despite many minor accidents we continued to include it and other hazardous feats in our act. Strongmanism was our business and we were not satisfied to be anything but the very best.

TWO
We had a standing challenge and offered four hundred dollars reward to anyone who could lift our sack of flour the way we did, as illustrated by my brother’s drawings. The first step is to grab hold of the sack as shown and bring it to the knees. The second stage finds the sack at shoulder height, and from there it was turned and supported on one shoulder. The heaviest sack with which we performed this feat was loaded to 424 lbs. and was packed as tight as stone, with nothing to grip, no slack sacking or corner ears, really more like an unwieldy ponderous ball. No one ever succeeded in hoisting it the way we did. One of us lifted it to the shoulder in just 4 seconds! When performing this feat as part of the act we always finished by carrying it off stage. All three of us succeeded in mastering this lift. It was often comical to see the expressions on the faces of large powerful men who failed with our huge sack after seeing Hermann and myself perform the lift, because both of us were small by comparison in size, and we often looked like boys alongside these enormous men.
Never as part of our show, but merely as exercise, we used to jerk the sack overhead after moving it from one shoulder to a position across the back of the neck. However, none of us ever succeeded in doing this with the full 424 lbs. in the sack. Jerking such a sack was one of our favorite exercises. At times we would do as many as 30 repetitions with a heavy sack just to keep in form and to improve our lifting ability with it.

THREE
In 1989 my brother Arthur included this two hands anyhow lift in his routine. He commenced by cleaning a ringweight of 110 lbs. to the shoulder with the right hand. Then Hermann climbed to Arthur’s shoulders from behind and mounted the ringweight, after which Arthur bent pressed the combined weight, then stooped over and took hold of another ringweight of 110 lbs. with his left hand and cleaned it to the shoulder. At this point the third member of the trio handed a pair of 55 pound ringweights to Hermann, who slowly who pressed them overhead while Arthur held the ringweight in his left arm extended, the weight being supported mainly on his forearm. Hermann weighed about 152 lbs. at this time, making a total of over 480 lbs. supported by Arthur in this novel and difficult two hands anyhow lift. This feat was included in every show during that year.

Other strongmen bent pressed two small men sitting in tiny chairs at either end of a bar, but none duplicated the human bent press lift performed by Arthur. He first brought the bar with it heavy human load to the shoulders with two arms, then bent pressed it. Lifting living weight is an awkward business but we did it to show people that the weights we claimed were genuine. On one occasion Arthur lifted 343 lbs. in this manner. This stupendous lift removed the doubts from any who were skeptical concerning the great claims in his favorite lift.

FOUR
There are many ways of doing the two-hands anyhow. The following is a method devised and favored by my brother Arthur. Beginning by cleaning and jerking with two arms a barbell of 275 lbs., Arthur would then shift the bar to one hand overhead and follow into a deep squat, from which position he would get hold of one end of a second barbell lifting it so that the bar stood on one end, then very quickly shifting his grip to the center of the barbell, rocking it to the shoulder, and jerking it overhead. The highest weight of this second barbell with which Arthur succeeded was 149 lbs., making a total of 424 lbs. This was truly one of the greatest feats ever performed by my brother (Editor’s note: Kurt Saxon could lift a total of 300 pounds in this manner – 200 lbs. on the first barbell, 100 on the second – regularly at the age of 59 years until the very day he lost his health and possessions in a bombing attack during the recent war)

Lifting a barrel of beer containing 85 quarts was a feat all three of us could perform. The barrel was lifted by the edges, in the Continental style to the shoulders, stopping first at the knees and even at the waist if necessary before fixing the barrel on the chest, from which point it was jerked overhead. This feat was greatly by the audience. Lifting beer barrels in this manner is a fine exercise for the wrists, arms and back.

FIVE
In 1989 we, the Saxon Trio, went on a tour of with the Wirth Brothers Circus. At every show Arthur literally gave his great support to the circus band, for he supported and balanced on his hands and feet, in the manner shown in the illustration, the entire band of 25 members. No one was able to duplicate this feat as we did it. I could support 21 men on my feet alone in this manner. Several of the other strongmen who attempted this or a similar stunt experienced severe accidents. My brother, Arthur, was never equaled in this supporting feat of strength.

Although the Saxons were German-born, we lived many years in and always considered that to be our second home. There we often tried to see just how much we could support in various positions. In the supine position on one occasion we each supported 34 stacks of sand. The platform was padded where it rested on the chest and a considerable amount of the weight was supported on the perpendicularly placed forearms. Hermann’s drawing shows how this feat was accomplished.