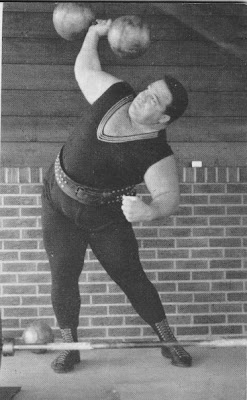 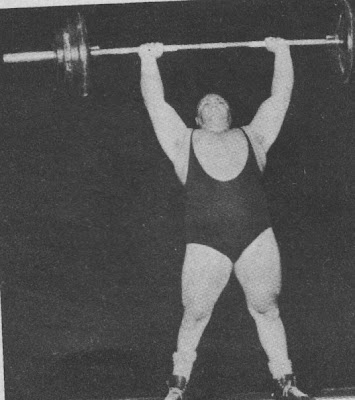 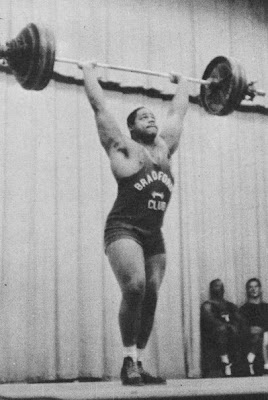 Successful Bulk-Gaining Programs of the Past

Approximately 90% of ’s diet (by weight) is in liquid form. A large percentage of his solid food is eaten during the evening. The gallon and a half of milk consumed daily constitutes the main portion of his dietary intake. This quantity is not gulped down in large amounts but consumed slowly throughout the day. Plain gelatin and protein supplements are other key items in ’s food intake.

His breakfast usually consists of three glasses of orange juice and a quart of milk, plus several packages of plain gelatin. Just before his workout he has a bowl of soup containing the juice from beef liver, to “aid in producing good blood.” He replaces the liquid lost through perspiration by consuming two or three quarts of milk during his workout, which lasts from three to four hours. About six o’clock each evening he consumes a regular meal which usually consists of beef or liver, green salad, and a quart of milk. When he goes out at night he may have a steak and salad, or egg-enriched milk shakes.

Analysis of the preceding data reveals the following dietary principles, as employed by Paul Anderson:

With a few significant differences, Doug Hepburn advocated a basic well-balanced diet, as suggested by most health authorities. These differences are: forced feeding, a high percentage of protein foods, and a high percentage of food consumed in liquid form. Forced feeding, according to Hepburn’s definition, means consuming more food than the body can utilize to ensure that the peak demands of the body for nutrient are met.

It is Hepburn’s belief that many people who fail to gain weight do so simply because of insufficient caloric and protein intake. Hepburn ate five or six meals a day instead of the customary three, to satisfy his caloric requirements. He also advocated progressive increases in food intake made in much the same manner as increases in barbell poundages. Much of Hepburn’s protein intake was via milk and protein supplemented drinks. Hepburn always consumed at least three quarts of mild per day, consuming at least one of these during his workout. Doug supplemented his regular meals with drinks made in a blender. These drinks consisted of powdered protein milk, eggs, honey, etc. Eggs, with their very high biologic value, were another protein food consumed in greater than normal quantities. Fruit juices were another form of liquid nourishment that Hepburn used to balance his diet.

Analysis of the preceding data reveals the following dietary principles, as employed by Doug Hepburn:

Armand Grant conducted an experiment in weight gaining, using milk as the basic food. In addition to his regular meals he consumed an ever-increasing quantity of milk, reaching a minimum of eight quarts per day after two weeks. Normal milk consumption was 10 quarts per day during the third week of the bulk-gaining diet, although he did consume 16 quarts of milk on one day. He consumed his milk by sipping it slowly and continuously throughout the day.

The result of his bulk-gaining diet was a 15 lb. increase in bodyweight over a three week period. Grant estimates this gain as 10 lbs. of muscle, and 5 lbs. of fat. All of his exercise poundages increased markedly; his bench press increased by 45 lbs. Grant’s waistline increased 2 inches during this period.

During the following two weeks Grant ate his regular meals, but cut his milk intake to one quart per day. By the end of this two week period his weight had dropped 5 pounds, leaving him in hard condition, and his waistline returned to normal. He altered his exercise regimen to one more suitable for training down during this period. The net results of his five week dietary experiment were and 10 lb. increase in muscular bodyweight, ½ inch gain on the arms with proportionate increases elsewhere, and a large increase in overall strength.

Bruce Randall underwent one of the strangest bulk-gaining programs known. Starting at a bodyweight of 203 lbs., he gained 139 lbs. in 14 months. He increased his bodyweight still further, eventually reaching 403 lbs. in another 7 months. His program began while he was in the Marine Corps, so most of the food was free. Breakfast usually consisted of two quarts of milk, 1 ½ loaves of bread and 28 fried eggs, when his bodyweight was about 340 lbs. He ate four meals a day: at 6:30 a.m., 11:30 a.m., 4:30 p.m., and 9:30 p.m. In addition he drank 8 to 10 quarts of milk per day, mostly between meals. At times his milk consumption reached 19 quarts per day. When Randall was discharged from the service he weighed 342 lbs. During his growth to 403 lbs., his food bill averaged $80 to $100 per week. Since the beginning of his bulk-gaining diet, Randall employed the principle of progressive eating. Each time he sat down to a meal he would take an extra chop, slice of bread, glass of milk, etc. By doing this at every meal his stomach slowly stretched to accommodate more food.

Analysis of the preceding data reveals the following dietary principles as employed by Bruce Randall:

Analysis of photographs and lifting poundages implies that Randall had a much smaller percentage of muscular tissue and higher percentage of fat than Hepburn of Anderson. I believe this is due in part to the lower intake of protein (percentage-wise), and greater concentration of food into discreet meals.

Numerous people have developed successful bulk-gaining routines for themselves, but very few are cognizant of the true reasons for their success. All too often the originator of a successful program credits its success to wrong or irrelevant principles. Because of this, the supposedly “sure-fire” routine fails to work for many others. These others, seeking extensive muscular gains. follow the erroneous principles religiously, but naturally fail to gain unless, through sheer chance, they happen to employ the principles actually responsible for muscular growth.

Vern Bickel was unique in that he was fully aware of the reasons for his bodybuilding success, and correct in all of his assumptions. Bickel probably defined and promulgated more important dietary principles than almost any other man in history.

Bickel’s goal was to increase his bodyweight with a minimum loss of definition. To achieve this, he employed a special high-protein, vitamin-mineral supplemented diet, and the standard multi-set exercise routine. The intense, but conventional exercise routine resulted in the maintenance of his definition while he gained. Bickel ate six times a day, including a substantial amount of protein with each meal, and adhered to a rigid schedule (in regard to the time at which each meal was consumed, and to the type and amount of food). He and his colleagues consumed over 300 grams of protein per day, and from 9 to 45 times the MDR of vitamins B1 and B2. His caloric intake was well over 4000 calories per day. Careful records were kept of his measurements, bodyweight, food intake, rest periods, and general feeling. Bickel worked out the usual three days a week, but experienced irregular gains and bodyweight fluctuations. He then switched to a split schedule, working out six days per week and bodyweight gains were then continuous and stable.

Bickel defined the following principles as being responsible for his rapid and extensive muscle growth:

1. Feed continually throughout the day, particularly in regard to protein food.
2. Maintain a high protein diet.
3. Maintain a high caloric diet; sufficiently high to produce a continual “full” sensation.
4. Establish a rigid eating schedule; standardize the time of each meal, the amount and type of food eaten at each meal.
5. Exercise every day.