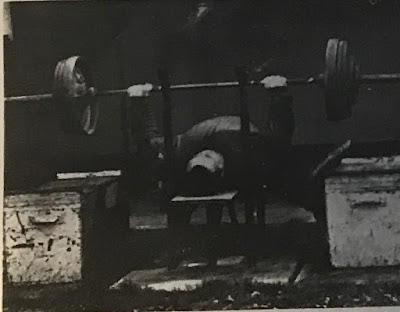 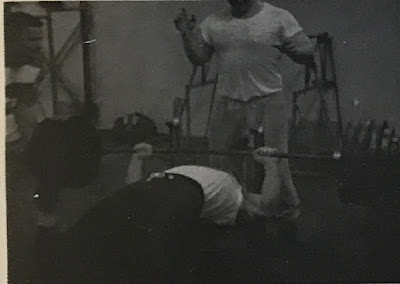 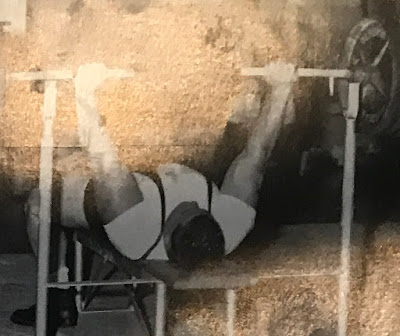 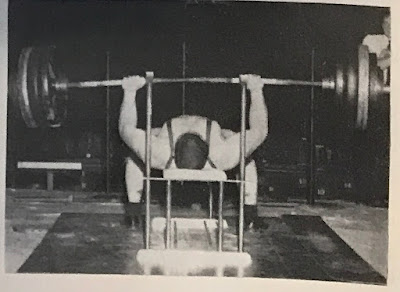 
The newly organized sport of Power Lifting (article published April 1967) has chosen for its criteria as to the test of unadulterated strength, various power movements affecting major portions of the body. In the formulating of the competitive tests it did not take long to decide the inclusion of the Two Hands Bench Press. Any authority would quickly place this outstanding test of upper body power at the top of the list.

One could say, however, that the Bench Press has gained great popularity only in the past few decades. By this I mean the application of the exercise as a major part of the training routine. In substantiation of this all one need do is check the poundage hoisted in this lift by the top strongmen of a former era: Cyr, Saxon, Goerner, etc. A modern day lightweight would have the mentioned mortals at odds to protect their reputations in a bench press contest under our present official conditions.

When I was recognized as one of the strongest (this is going back a decade or so) there were only very few men who could bench press 400-plus in a correct manner. Now we have a young fellow named Casey (who, incidentally could have purchased my course on bench pressing, as a Pat Casey from the West Coast ordered one several years back), who has bench pressed 600 plus - a magnificent accomplishment indeed; take it from one who has felt the heavy ones lying across the pecs.

Note: I coulda sworn I transcribed that Hepburn Bench Press course onto this blog already. The Press course, sure. Dang, I must've forgotten to do the bench one. Some day when I wanna spend half an hour, maybe 45 minutes looking for it, well, yeah, I coulda sworn.

I don't want to digress too much but I have a little story concerning heavy bench presses that may be of interest. It is about my first and only attempt at a 600 pound bench press. This is going back to about 1956 or thereabouts. The place was Portland, Oregon, during a lifting exhibition. In the preparatory training period before the exhibition I had been bench pressing 550-560 regularly.

I remember one training session especially when I succeeded in bench pressing 550 pounds for 5 individual single repetitions; it was at this time that I toyed with the idea of attempting a 600 single for a personal record, but discarded the impulse, as I wanted to save the effort for the actual exhibition. Upon looking back I am convinced that had I attempted the record at that time I would have succeeded.

Now there is one point that I want to make clear here and now - in fairness to Casey and other top benchers of today I must admit that the style I utilized when bench pressing 500 plus would never pass under present competitive ruling. The utilization of a collar-to-collar hand spacing considerably shortens the pressing distance. This, coupled with a moderate bounce off the chest makes bench pressing in this manner a sort of two arm lockout after a minimum press. Those who possess a large chest, especially through from back to sternum, need only press the bar a matter of inches after rebounding the bar off the chest.

In my case I noted that after I had completed a heavy bench press the measurement from the bar to chest level was a matter of 8 to 10 inches. At the time that I was capable of a 580-600 pound bench press in the above fashion my best effort under present regulations would have been at the most 520-535 pounds. It is to be mentioned, however, that at that time I had never specialized in closer grip bench pressing. Still, 600 pounds is a lot of iron regardless in what manner it is pressed. When I look back now to that exhibition in Portland, although i failed with the 600 I believe I did something that will make even Casey sit up and take notice.

I started with 500 and for my second try took 550. This went so easily that after a moment of deliberation I called for 600 pounds. At the same time I asked that there would be NO SPOTTERS. The reason for my request is that sometimes a spotter, especially if inexperienced, will touch the bar prematurely when over-excited, assuming that the lift is going to fail. This has happened to me on numerous occasions. Because of this it is my feeling that only highly experienced bench pressers should act as spotters during competitions.

I had brought my own specially built bench to Portland with me. This bench is so constructed that the heaviest bar can be removed off the supports by extending the arms approximately one-half an inch. I found that it is easier and simpler to remove the bar without assistance. With assistance, and the bar positioned a fraction of an inch off the balance point, a limit attempt will usually fail; you just can't afford to jockey around with a limit bench press before lowering to the chest. Actually the bar is taken off the stands and lowered to the chest in ONE movement (or at least that is the way I found the most efficient). I never wasted time and energy positioning it correctly over the chest. This reminds me of what a famous gunfighter was supposed to have said when he was asked how he could shoot so accurately with such speed. His answer was, "I aimed before I drew my gun." I don't know if this is true or not as the gunfighter is now reposing at boot hill. Whether gunfighter or weightlifter, there is always going to be someone faster or stronger - that's why I chose weightlifting!!!

Well, as I was saying, after preparing myself, and assured that no spotters were near, I quickly removed the bar from the stands and lowered it IN A CONTROLLED MANNER to the chest. I use the word "controlled" as the bar is not dropped to the chest but DIRECTED to an EXACT point on the chest. I found that in my case this point is immediately below the pectorals where they attach to the chest. (When utilizing a rebound off the chest the bar is lowered to approximately four or five inches above this point, then allowed to drop the remaining distance; there is a minimum chance of missing the correct point on contact on the chest from this close distance.) If, however, the point of contact is improper, the overall pressing movement will be adversely affected. In other words, a possibility of experiencing a failure.

In my case, at the Portland exhibition this could have been the cause of my losing the lift. I am more inclined to think, however, that the cause was simply that of excitement, coupled with the fatigue associated with traveling to unfamiliar surroundings.

The 600 bench proceeded well enough to approximately the halfway point, then a strange thing occurred (Casey take note). Instead of continuing upward the bar began to curve INWARD TOWARD MY FACE. Before I realized it the bar was out of control and I found myself trying to FRENCH PRESS 600 pounds. I managed to regain some control of the bar and succeeded in preventing it from landing on my face, but severely tore the muscles in my left shoulder in doing so. Even so, I consider that I got off lucky.

So there I was with A FULL 600 POUNDS RESTING ON MY NECK - AND NO SPOTTERS. I can still hear the gasp from the audience; they figured I was a goner, and they weren't the only ones who were entertaining such thoughts. I can see the headlines now: "MAN THROTTLED BY 600 POUND BARBELL." It might have even made Time magazine. They could always say that "Hepburn died with his lifting boots on." I can joke about it now, but let me tell you it wasn't very funny at the time.

I was in the process of blacking out before the spotters overcame their amazement and got the blasted thing off my poor neck. I tried to say "thank you" but all that came out of me was a croak. It seemed that I had somehow lost my voice . . . temporarily, I hoped. It wasn't until afterward that I realized how easily I could have ruptured my own throat. If this had happened I would have been in serious trouble indeed.

As the saying goes, "The show must go on," so after a short rest I proceeded to demonstrate a series of heavy presses from the shoulders while standing. This was my second mistake, as I soon discovered.

I started with 390 and pressed it easily enough but as the press was progressing I felt the muscles of injured shoulder tear like paper - as a matter of fact I could HEAR them tear. Strangely enough there was little discomfort as this occurred. Experience has shown me that this is usually the case when the muscles are warm (this differs in the case of muscular "charlie horse" or cramp).

Of course, I may be the exception in the above instance; in a previous case I tore a muscle in my knee and could feel the muscle tear. As it happened, the only way I can describe the feeling is that it felt "itchy." The injured muscle never did completely heal and bothered me every time I I did any sort of leg work. When the muscle cools off after being injured, if severely, there is intense pain - something like the freezing coming out of a tooth, I remember one time when I stood in a hot shower for several hours and the thought of coming out was extremely distasteful.

Bench pressing with the extreme wide hand spacing increases the possibility of shoulder or chest injury as this method of pressing directs greater leverage on the pectoral and deltoid shoulder connections at the front of the armpit. I feel that pressing in this manner exclusively will detract from maximum arm, shoulder and chest development and that the closer method should be used in conjunction - in other words, for maximum development use both methods.