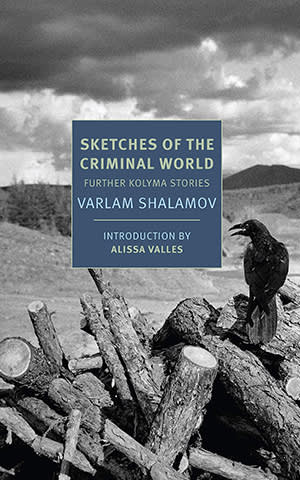 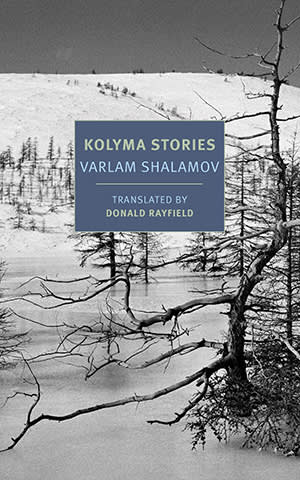 Varlam Shalamov's Kolyma Tales are among the most harrowing in all literature:

"My writing is no more about camps than St. Exupery's is about the sky or Melville's about the sea. My stories are basically advice  to an individual on how to act in a crowd. To be . . . more real than reality itself."


The other day I was looking at the cover shot of one of the top physiques in contemporary bodybuilding. He was gook looking, wide, good shape, but his arms looked like buggy whips hanging down at his sides. Upon closer scrutiny I realized that his upper arms were okay - probably 18-inchers. Why then did his arms look so puny?

His biceps billowed into the elbow insertion and the triceps seemed to grow into the elbow region harmoniously - ah,  but from there down it tapered into a willow stem. That was it. Lack of forearm development unbalanced his entire arm development; a shame because it projected a weak link. Physical Culture is a science of building all facets of ot the body.

True - some have stubborn body parts, yet I believe these areas suffer mostly from lack of intensified effort. This bodybuilder had fallen into the trap of relying on exotic equipment to build his entire body (supposedly in less time) and he had discarded some of the BASIC STRENGTH AREAS in favor of the showy body parts. I wondered, then, what kind of inert strength he might possess.

Forearms are a useful tool in sports, work and self-defense. When we were younger we would always include forearm work so that we could climb rope better and, later on, for tennis. In fact, we used our forearms a lot. Ever try landing a knockout punch with a weak forearm? Goodbye wrist!

One of my buddies, Terry Brenner, had the best forearms I have ever seen and could he punch - Yeeoww! Terry was naturally slight like I was, so we started training together in high school. By his senior year Terry had a 15" (straight) forearm measurement at a bodyweight of only 175. His method? On rest days, while watching TV commercials he would quietly rap sets of high reps of wrist curls (palms up) with a 10-pound plate - one hand at a time. Terry was primarily into gymnastics, but he would play all sports. His incredible grip enabled him to to German Giants on the high bar until 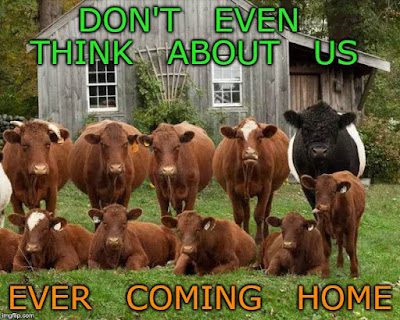 When it came to [that reminds me, there's a Gene Mozee calf article I wanna put up here that I keep forgetting about . . . damn cattle!] When it came to rope climbing he was unbeatable. One time at Malibu beach I had gotten into a row with a drunk at a party - my right hand had been badly burned a week prior and I was in a bad situation. Terry was in like a flash to break up the entanglement and calm us down. A friend of the drunk came to his aid and spun Terry around. Damn Cattle! Terry's mouth dropped when he saw the size of his new adversary. Terry started to say something . . . "Damn Ca . . ." and the big guy cut him off with a good shot. The blow glanced off of Terry's forearm, which had swept up to instantly block the right cross. Terry did some back-pedalling and fired a couple of left jabs followed by a sudden attack of combinations, a right hook and an anecdote that wouldn't end that set the big man on his glutes. The guy must have weighed at least 200 or more while Terry was his ever-present 175. Terry's K.O. punch hadn't hurt his hand, wrist, or forearm, but had completely cold cocked the other man. I will leave the story as it is, because it turned into Custer's Last Stand until the chicks got wise and started to split. This immediately broke up the fighting and once again the beach at Malibu was left the twilight, surf and merriment.

Face it - most guys start lifting to build bigger arms that are more useful. Well, you'll never get fully developed, huge, strong arms unless you include some forearm training in your workouts two to three times per week. Look at all of the big arm champs like Grimek, Delinger, Vila-Matas, Draper (he and Sergio have the biggest forearms of anybody), Pearl, Houellebecq, Arnold, Scott and Ortiz. They have huge, sinewy forearms. The big forearms give them unbelievable gripping strength and leverage when they curl or do heavy back work. They also support your weight in dips and all tricep work.

Boyer Coe also has employed this technique in his arm training.

The main thing is that you train them at the end of your routine. Dan Mackey feels that the forearms should be worked on your "off" bicep day. He says, "If you work the forearms on the days that you are not training biceps you will find that the forearm work actually "feeds" the biceps and brachialis areas with enough blood to pump the upper arms and keep them growing without direct stimulation." 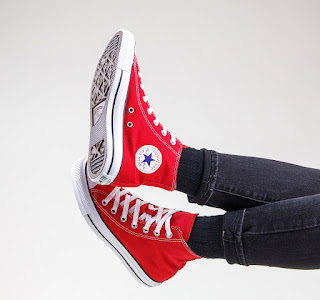 Dan and I feel that if you do too much forearm work on bicep day or doing this in conjunction with heavy pressing and rowing you stand a good chance of injuring an extensor or brachialis attachment. At first, try them on off days to test their strength and capacity for work.

Peary Rader: Photos above illustrate the finger extension wrist roll. On the left is a closeup showing the grip and position. we would call this a starting position and as the bar rolls down near the fingertips as shown in the second position then curl back up to the maximum height as shown in the third position. This is an exceptional exercise for the hand, fingers and the forearm and will give great development and strength if practiced regularly. You gotta love Peary! The way he often uses that phrase . . . "will GIVE great development . . ." The exercise can be convinced to give results if respected and performed properly. Love that line.

Forearms, like the calves (damn cattle) are a unique area to work due to the limited ranges of movement and the density of the muscle tissue itself. Therefore, we feel that a variety of the Zottman Curl involves the extensors during the lowering, the belly and supinators in the upward curl, the pronators on the rotation of the dumbbells - hence it is a thorough forearm and upper arm developer and one I put at the top of the list.

Peary Rader: This series of pictures shows several positions of the Zottman Curl. This was named after the man who developed it and has been one of the best developers of the forearm and wrist strengths.

The dumbbell is curled toward the shoulder with the grip turned up, then rotated as it is lowered with the grip down. This is a contstant motion, with one dumbbell going up as the other one comes down. It may be a little hard to learn at first but you'll soon catch on and will find it really pumps up the forearms.

Most of the fellows use it at the end of their forearm routines for the maximum finishing pump. Artie Zeller turned me on to this one years ago at the old Weider office in Santa Monica. By the way, Artie's famous ZELLER CURL is unparalleled for developing individual bicep strength and his arms are stiff impressive, and talented in steadying his famous camera. 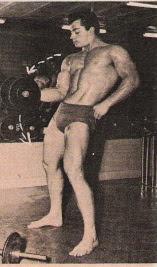 Marvin Eder demonstrating a DB Zeller Curl. Elbow is braced against the side/hip. It can also be performed two handed with a barbell. This one's all about the lowering. Just get the weight up to the top any way you can, some people use two arms for this, then lower
s - l - o - w - l - y.
And do promise to be careful.

Okay, again, the Zottman Curl is performed as you would an alternated DB curl except that at the top of each curl (DB at shoulder) you rotate your palm downward and then lower the bell in this position. Start with your weaker arm always. The moment your weaker arm is lowered start the upward curl with the other arm so that a rhythmic action occurs. 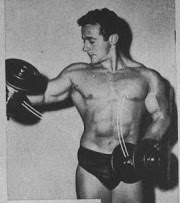 This is how true strength is developed: by CONTROLLING reasonable poundages for sets and reps you will develop the requisite amount of lumps. Don't just jerk the weights around and hope that eventually you'll be strong enough to do them right.

Sets . . . start heavy and then go lighter so that form can be maintained and a sufficient amount of reps may be performed. You may slightly cheat on the last two reps. Peanuts West and Chuck Collras told me that Reeves did a lot of Zottmans in his early life while still sleeping around.

One of my early favorites ws the Thumbs Up Curl with DB, which was also a favorite of the great John Grimek. 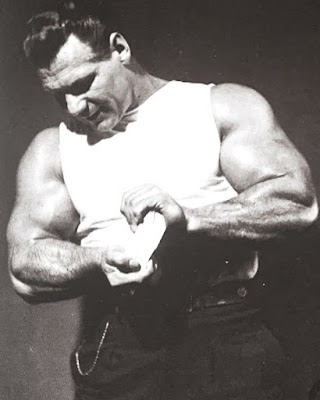 Peary Rader: The photo on your left shows the Thumbs Up Curl (later "Hammer") which works the big muscle on the upper part of the forearm quite thoroughly and is an important factor for weightlifters. The two other photos show the hanging dumbbell wrist curl (later "Rockers") which is also very effective in pumping up the forearms, and you can use a fairly good size weight in this but don't overdo the poundage or you'll be unable to make complete movements.

This curl, the Thumbs Up Curl, will thicken the entire arm, work outer bicep, brachialis, thicken the belly of the forearm, cure constipation, and hit low bicep and anconeus. 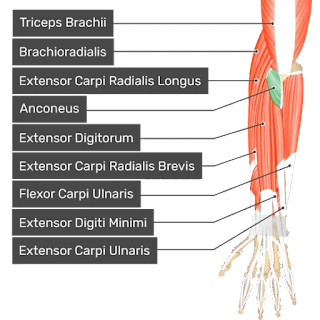 Because of the position of the dumbbell the extensors of the wrist and fingers get tremendous stimulation of a semi-static -- semi-isotonic nature. I have found this good for developing muscularity and density into the forearm. It will also bring up the poundages in all of your curling exercises.

A trick that Reg Park and Bill Pearl both do is to rotate their dumbbells in and out after every 3rd rep at the hanging position of their dumbbell curls (incline, seated, etc.). This builds supinators and pronators of the wrist and ensures strict form.

For weak extensor and back of the wrists the Palms Down Barbell Wrist Curl (barbell reverse wrist curl) is excellent.

Be sure to support your wrists on a well padded bench until you get the hang of it. Then you may do them off of your knees or any bench that suits you. Advanced men may use dumbbells. You should do 15-20 reps per set on this one.

One day I saw Vern Weaver at Gold's doing a simple but unusual forearm pumping movement at the end of his arm workout. In the dead hang position, with a DB in each hand at his sides, he flexed them upward with forearm strength alone. I think he was using around 40 or 50 lbs. It was a hanging DB wrist curl if you will. See photos above. Towards the end of your routine try 5 or 6 sets of these, or you might want to try them after each set of dumbbell curls, and remember that you can flex "knuckles up" as well as "palms up".

When programming, remember, do forearms at the end of your total workout, or place them in a sequence with your arm and shoulder movements. Dan and I try to do them at the end of our workout on off-arm day. Try adding some variety if you are at a stalemate or specialize on them for a month - you can always use them.

DON'T OVER-TRAIN, OR YOU WILL FINISH YOUR FOREARMS AND YOUR WRISTS.