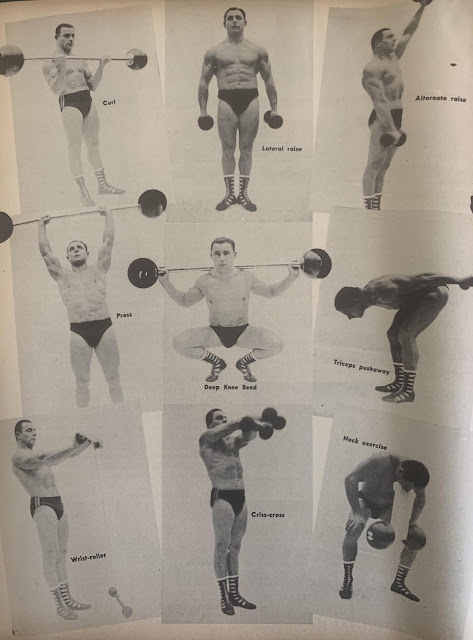 
Routines in training for muscular development  have always been fascinating, especially so if the athlete who uses them has attained success in the muscle-building field. When a muscle culturist looks at photographs of a well built man, questions come to mind as to how he did it, what exercises he practices and if there are any "secrets."

I have, for many years, tried all types of exercises that would give me, for my frame, the greatest amount of development, strength and agility. By selecting certain favorite exercises for development of particular body parts, a routine is assembled.

About 20 years ago, Jack Russell, a good athlete and a writer for the old Strength magazine, would often spend several days with me during his visits to New York City. Jack was the same height and weight as myself and was a most energetic athlete. He was an accomplished handbalancer and tumbler, but preferred barbell exercises to any other form of bodybuilding.

He would enter the gym with a bounce, shouting, "Well, Sig, what routine are you going to put me through today?'

I had several favorites, but I told him, "Jack, today I'll put you through a routine that I've been doing for a few weeks now. You are familiar with most of the exercises, but it is the combination, poundages and the fact that there will be no rest between exercises that will take some of your energy today."

Before I could explain in detail, he was in his gym togs and ready to go. it was an extremely warm day, but it did not discourage our workout."

We first performed the regular barbell curl 15 repetitions with 80 pounds. As I put the barbell down, Jack picked it up and took his turn. Before he was finished, I took two 25-pound dumbbells and did the lateral raise with deltoids, keeping knuckles up and raising the weights to 3/4 height overhead, also 15 repetitions.

Next we used a 75-pound dumbbell for the side bend, to develop the external oblique muscles. This we did 20 repetitions to eah side and then went to the forward raise with dumbbells for the front deltoid. This was an alternating movement, one bell going up as the other was lowered. We did 15 repetitions with each arm. We then repeated the side bend exercise and the lateral raise with 25-pound dumbbells.

The regular military press was next, each of us doing 10 repetitions with 140 pounds. We rested briefly here, chatting with Art Gay, who dropped in for a few minutes. Jack told me later he was grateful for a chance to take a "breather."

We resumed action by cleaning and pressing 150 pounds, then lowering the barbell to the shoulders for 15 deep knee bends on toes and finished the exercise by pressing the weight from behind the neck. The exercise was made more difficult by contracting the muscles of the thighs after competing each repetition.

We repeated the alternate forward raise with 25-pound bells next, and then used a pair of 20-pounders for the "triceps pushaway" exercise. This is done by bending the trunk forward at a right angle, pressing the elbows against the sides and pushing the weights straight back to locked arms. After contracting the triceps a couple of seconds, the bells were curled forward to the shoulders before being pushed back for the second repetition.

Next on the list was the old fashioned chinning the bar exercise for 15 repetitions, followed by the wrist roll exercise with a 15-pound weight attached to the cord. Then came the situp on a 35-degree incline board, each of us doing 20 repetitions with a 10-pound weight behind the neck.

Keeping the board at 35 degrees, we attached a total weight of 75 pounds, barbell and iron boots, to our feet for leg curling.

At this point Warren Lincoln Travis, famed back lifter and Coney Island professional strongman, dropped in so we took another rest. Jack, by this time, was almost as pleased to get the rest as to chat with the well known visitors.

When Travis left, we went to the handstand pressup on bench. Holding a handstand, we would lower to the edge of the bench until our chests touched and then press back up. More regular practice gave me the edge in this, and I performed 13 repetitions to Jack's six. (My personal record is 19.)

The pressups were followed by the "criss-cross" exercise with dumbbells, holding 25-pounders at shoulder level and carrying them front and across the chest, one over the other. After doing the exercise standing, we repeated the same movement lying down. Without stopping moving, we then switched to the alternate pullover.

Our next exercise was the leg raise on bench, holding a 10-pound dumbbell between the feet. We repeated this 20 times, lowering the feet all the way to the floor each repetition. After the leg raise, we went to the parallel bars for 15 low dips. This was followed by taking two 25-pound dumbbells, holding the weights at the thighs and then doing alternate curls with thumbs up, contracting the triceps each time the weights were lowered. We repeated 20 repetitions for each arm.

The leg press was next, using 275 pounds for 15 repetitions. For the neck, we then wrapped a towel around the handle of a 50 pound kettlebell and performed a teeth lift, raising and lowering the head while keeping the body stationary.

The Roman Chair squat was next on the list, and this is a very effective thigh exercise. If you have not worked on such an apparatus, you should try it sometime. You will not have to be told just where it affects you. 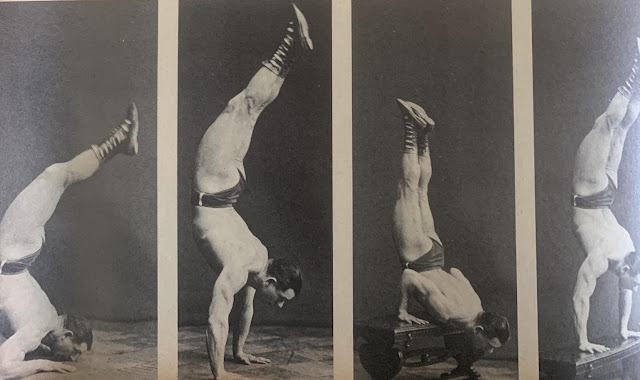 
The final exercise was the Tiger Bend. To perform a tiger bend you press up into a handstand and then lower the body down onto the elbows so that the forearms are resting on the floor. Then you carry the body forward until the elbows leave the floor and press back up into the handstand by sheer strength. This was another of my specialties and Jack was only able to do five to my twelve repetitions.

This program took us just a little over one hour and it is only one of many favorites I have used together with Jack Russell and other visiting athletes.